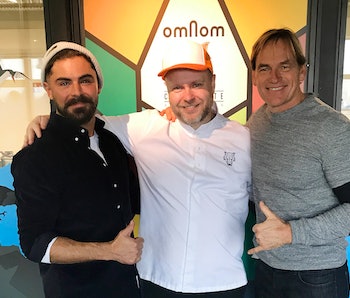 Iceland-based Omnom Chocolate had only been exporting its products to the US for a few years when movie star Zac Efron dropped by to film a segment for his Netflix show, Down to Earth with Zac Efron. When the episode featuring the company finally aired this summer, it practically squeezed the company dry. In this Q&A, Omnom’s co-founder Kjartan Gíslason explains to Inverse how his company was able to deal with the surge and subsequently improve its operations.

Tell me what your company does.

We are Omnom, an award-winning small-batch, handcrafted, artisanal chocolate maker based in Reykjavík, Iceland. We produce small-batch, “bean-to-bar” chocolate using cacao beans sourced from around the world. We challenge the understanding of bean-to-bar chocolate production and the way flavors and textures can creatively expand the business. Our mission is to make the best chocolate possible using the highest-quality ingredients. Each one — single-origin cocoa beans from Madagascar, Tanzania, Peru, and Nicaragua; organic sugar cane; natural Icelandic milk powder — is individually sourced with care, placing ethics, sustainability, and transparency at the heart of the process.

At what point did you scale up, and what did that growth look like?

We began scaling up in 2014, when we started exporting our craft chocolate to the US. It has been a slow but escalating buildup for a while now, and in the past two years we’ve seen a sustainable rise. In 2016, we moved to a new production space and that scaled up our production capacity dramatically — which really helped us both domestically and internationally. The rise of tourism in Iceland over the past few years has also changed a lot for us.

However, the most dramatic growth that happened was after the airing of Down to Earth With Zac Efron on Netflix. In 2018, Zac and wellness guru Darin Olien visited our factory to film a segment on sustainability and superfoods. They told us that the show would air in 2019. Last year came and went with no news of the show. We just assumed the show didn't get picked up and shrugged it off. It was no big deal — we had a lot of fun hosting Zac and Darin, which was an experience in and of itself.

Then, 2020 came around and with all the craziness in the world, we shifted our focus to staying afloat amidst the pandemic. We heavily rely on tourism in the summer months and so we had to figure out a way to make it through. Sales were down, tourism was cut completely, and the world stood still. Until early July, when our marketing manager, Hanna, got an email that the Netflix series was set to launch in three days' time. The day the series launched, we saw a spike in sales of more than 30,000 percent. We did more sales in the week following the Netflix launch than we had done in the entirety of our US market presence.

What went wrong when you scaled up?

We’ve had a few of these moments. Back in 2016, we overestimated the demand for our chocolate. We had moved into a bigger production space, which at the time was a very costly change for us, but thankfully, it has paid off now.

With the newest increase in demand after the premiere of Down to Earth on Netflix, we were caught off guard, as we had three days’ notice before the premiere. We never expected this surge to happen, let alone during a global pandemic, and we are extremely grateful but were very surprised. Thankfully, we were able to quickly bring back our entire production team full time, and we have been gradually gaining speed in production. We usually plan two to three months ahead of time, so any kind of unexpected demand, like the popularity of Coffee + Milk this summer (the chocolate bar Zac Efron tasted and raved about on the episode), can really set us back a couple of weeks.

How bad did things get?

This summer was very interesting, to say the least. We were low on stock to begin with, and sales of chocolate in the summer time are usually much slower than during other seasons, so for that reason, we sold out a couple of times over the course of a couple of weeks.

For us, the biggest problem wasn’t really chocolate production; the main problem was that we didn’t have enough packaging ready or printed, so as you can imagine, there were many bottlenecks we needed to sort out. Also, we needed more raw materials to produce our chocolate. Sometimes it’s a bit harder living on an island in the North Atlantic — it takes longer for shipments to arrive here.

How did you fix the issue? Where did you get the idea for the fix?

To make more chocolate, we added weekends and longer days to production, so production has increased to 150 percent of what it was. We’ve also started printing our packaging locally to keep up with demand. With local printing, the turnaround times are much faster and we are able to cut down on shipping costs, which nearly offsets the cost of domestic production.

Omnom is Icelandic to its core, so we’ve always prioritized sourcing local ingredients to include in our chocolate bars, like Icelandic milk powder from nearby dairy farms and hand-harvested sea salt from the Westfjords. By expanding this “local first” mindset from our ingredients to our packaging, we are able to not only meet increased demand, but we are also able to support local businesses, which is extremely important — especially during these times.

What do things look like now that you’ve corrected the problem?

We are almost there — we are probably a month and a half out from adjusting completely, but with our super trooper production staff, we are not worried at all. We just started our Winter Collection production and should meet all deadlines for that. We are all working longer hours to catch up, but we feel confident that we can keep up with our newfound demand. Now that the initial shock of the sales spike has worn off, we’re more excited than ever to continue expanding our presence in the US.

What did you learn from this experience that other business leaders need to know?

Take care of your staff first and make sure to have good communication so that everyone knows what is happening. Focus and prioritize what needs to get done in order to make business easier. That’s the key here. We had a few ups and downs this summer, but we learn from each and every experience to become better. We’re lucky to have the best staff around. It’s easy to motivate people who all have the same goal.

We started out as small Icelandic chocolate makers in a converted gas station, and we never thought we’d be featured on a Netflix show with Zac Efron. And we certainly didn’t realize that the show would drive our chocolate sales up by 30,000 percent in the middle of a global pandemic. We’re incredibly fortunate to have this experience, and it only makes us want to share our craft with more and more people.