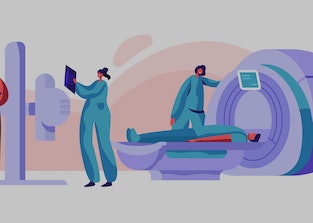 the doctor will see you now

This flexible material could revolutionize x-ray detectors for medicine

X-rays can be an incredibly powerful medical tool, but as evidenced by the lead aprons we don when using them, they also come with potential health risks.

To solve for this, researchers have now designed a new x-ray detector that is smaller, more sensitive, and less dangerous than before.

Using extremely thin layers of a heavy element-laden mineral called perovskite instead of the traditional silicon, a team of researchers have designed an x-ray detector that reduces the amount of radiation exposure. These perovskite layers also have 100 times more sensitivity than traditional detectors

"It's a very interesting material. On the one hand, from the crystal structure, you can see that they are crystalline.

"One maybe would expect that they are fragile, like silicon wafers, but we are able to coat the material by solution method, for example, with plastic substrates. That means the material can stand certain bending or mechanical stress, work efficiently and be flexible."

The innovation was announced by scientists in a study published Friday in the journal Science Advances.

When it comes to their most basic purpose, silicon and perovskite x-ray detectors work largely the same way. Both absorb x-ray photons (waves of light emitted in the x-ray spectrum) and translate the photon information into electric signals that describe the intensity of the light.

Because of perovskite's composition, the scientists say that their perovskite detector translates these x-ray photons with a much higher sensitivity than traditional silicon detectors.

"The first time we did this measurement we were quite surprised to see that these internal electric fields occurred from the x-ray exposure without any voltage."

The scientists write that the lead and iodine content of their perovskite x-ray detector allows it to absorb and measure x-rays that would have simply passed through typical silicon detectors. If silicon's composition is like a butterfly net trying to collect sand on a beach, then these thin perovskite films are like a shovel.

The discovery is only the start of this perovskite detector's advantages, write the authors. The researchers also observed during their trials that the detector maintained its sensitivity even when there was zero bias, or zero voltage, applied to it.

This means that the detector is able to operate without any outside power source, classifying it as self-powered, Nie, tells Inverse.

"The first time we did this measurement we were quite surprised to see that these [internal electric fields] occurred from the x-ray exposure without any voltage," says Nie. "We were really excited about it."

Hsinhan (Dave) Tsai, a postdoctoral fellow at Los Alamos National Laboratory and study co-author, said in a statement that this capability, coupled with the material's low-cost, make the perfect storm for an x-ray detector revolution.

"The perovskite material at the heart of our detector prototype can be produced with low-cost fabrication techniques," says Tsai. "The result ... could radically improve existing X-ray detectors, and potentially lead to a host of unforeseen applications."

Because perovskite can be easily sprayed on a surface to create thin layers like those used in their detector, Tsai says he imagines a future where these detectors could be rapidly printed off.

"Potentially, we could use ink-jet types of systems to print large-scale detectors," said Tsai. "This would allow us to replace half-million-dollar silicon detector arrays with inexpensive, higher-resolution perovskite alternatives."

More like this
Innovation
Sep. 19, 2022
This face mask hunts for viruses in the air you breathe
By Molly Glick
Innovation
Sep. 21, 2022
Gaming tech could ease pain during surgery — here’s how
By Sofia Quaglia
Innovation
Sep. 20, 2022
A rodent "backpack" could speed up cancer drug discovery
By Hannah Thomasy
Related Tags
Share: