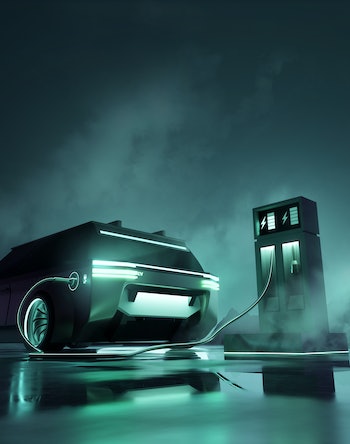 In the electrified American dream, your home is your gas station. Drive home from work, plug your electric vehicle into your house’s electricity supply, and rise every morning to a full battery. Rinse and repeat.

No more paying for expensive gas at the pump or, for that matter, no more interrupting an already arduous commute with a stop at the gas station.

In this halcyon future, a hundreds-of-miles-long car ride is the only time you’ll need to worry about fueling (or in this case, charging) your car in public ever again.

This description fits most of the early adopters who have bought EVs during the last decade or so, says Jeremy Michalek, professor at Carnegie Mellon University and director of the Vehicle Electrification Group. Most EVs cost a fair amount of money (the least pricy is almost $30,000 at base), so it makes sense that most electric-vehicle drivers are also homeowners.

“They often have multiple vehicles in their household as well. They can install a charger at home, leave every day with a full tank of electricity, and almost never really need public charging infrastructure with the range of today’s electric vehicles.”

“Renters... may not have the option to install charging infrastructure”

Meanwhile, gas prices are soaring, and legacy automakers, as well as startups, are bringing a new slate of EVs to America’s roads. In turn, driving electric is becoming more enticing for those without the ability to charge at home — after all, if you live in an urban high-rise apartment complex, where would you put the plug?

Such a sea change in American car culture could exacerbate the gap between the haves and have-nots. For those who can charge at home, living with an electric car is arguably easier than the old ways of filling up with gas. For everyone else, maybe not.

Nationwide, about 35 percent of Americans rent their homes. That number is significantly higher in coastal cities with high costs of living — the same places where, for reasons political and geographical, residents are more likely to want an electric vehicle. In Los Angeles, the largest city in America’s largest EV market, more than 60 percent of residents rent their homes.

“When you try to get to mainstream levels [of EV adoption], you're talking about renters who may not have the option to install charging infrastructure,” Michalek says.

“And even if they have charging infrastructure this year, renters tend to move, and they don't know whether they'll have that access next year.”

Anyone who can’t check one of those boxes, though, will be left to deal with the irritation of finding a fast charger out in the world whenever their battery starts to bottom out. An annoying and time-consuming errand at best, a disruptive force in their day at worse.

The United States has only 6,000 high-speed EV charging stations.

Most Americans, especially urban Americans, live close to at least one if not several of the country’s 150,000-or-so gas and diesel fueling stations, and rarely suffer too much stress trying to find a pump before the needle reaches E. Not only that, but once at the pump, it takes perhaps ten minutes to fill up, pay, and drive away.

But as of spring 2022, the United States has only 6,000 high-speed EV charging stations that can refill a whole battery in less than an hour. Even city-dwellers may live several miles from the nearest charger. They will need to drive well out of their way every time the car has to charge, so at least once or twice a week, and then spend up to an hour at the charging station.

Fast-charging is getting faster: Tesla boasts that its fastest superchargers now deliver 200 miles of juice in just 15 minutes. And more high-speed charging stations are opening every day to serve the growing number of American EVs, including the half-million new plugs to be funded by the Bipartisan Infrastructure Law passed in 2021.

Even so, charging is simply not the same task as pumping gas. Because of the time required, a popular charging station might see a line of cars back up during its busiest times, leaving drivers to spend even more time just waiting for a plug to become free — a time penalty on already-busy people.

One way to ease the pain would be for more workplaces with on-site parking to offer EV charging to their employees. After all, work is the other place besides home where so many cars spend most of their lives sitting idle.

“Of course, in the post-pandemic world, home-charging availability has become more important… with all the (presumably at-least-somewhat -enduring) virtual work,” says Timothy Lipman, professor at the University of California, Berkeley and co-director of its Transportation Sustainability Research Center.

“We see people running extension cords out into their driveway [to charge their cars].”

Lipman sees this pain point close to home. In San Francisco, more than half of residents live in apartments rather than single-family homes. Because of housing costs, many people with single-family homes have (legally or not) converted garages into living spaces and can no longer park their cars there.

“We see people running extension cords out into their driveway [to charge their cars], stuff like that,” Lipman says.

To boost the number of people able to charge at home, cities could require new housing units to be built with chargers or increase the number of plug-equipped street parking spots. But such approaches carry their own downsides says Alex Baca, D.C. Policy Director for the group Greater Greater Washington.

New housing is expensive, which means requiring EV charging there may not benefit those who need it most. To get landlords to build chargers into existing rentals, local governments would need to spend huge sums of money to subsidize the construction, Baca says. Meanwhile, putting plugs beside on-street parking spots is expensive and takes up space that could be used for bus lanes, bike lanes, or any other use.

“We can’t just ensure a parking spot and a charging station for everyone in an apartment,” she says, “because then… there’s no city left.”

Despite their resurgence, EVs may not be the gasoline alternative for everyone, Lipman says. He is one of the few Americans who drive a hydrogen fuel cell vehicle, once hyped as the technology of the future before being eclipsed by battery-electric cars. In his work at Berkeley, Limpan advocates for hydrogen in places where it could be the right fuel source to slash emissions — for example, if it replaced the dirty diesel trucks that the agriculture sector in California’s Central Valley.

But if hydrogen could make a comeback and the cost of fuel cell cars could come down significantly, he says, then hydrogen could, one day, serve drivers without home charging to support an electric car.

“I still see a role for the light-duty fuel cell car,” he says. “I just think there are a lot of people who are kind of used to the gas station model — and not having plug-in.”

Perhaps by now, you’ve heard the phrase “ban cars.” Meant literally or not, the provocative phrase is meant to point out the problems with a world built around the automobile.

More than 42,000 Americans died in motor vehicle accidents in 2021, the highest total since 2005, and the rising size and weight of cars and trucks make them especially hazardous to cyclists and pedestrians. Parking lots and cloverleaf interchanges require enormous swaths of urban real estate. Car ownership and maintenance are expensive, but a car-free life is difficult if not borderline impossible in much of the U.S.

Electric vehicles address one specific automotive woe: If their electricity comes from renewable sources, then they can reduce the enormous amount of greenhouse gas spewed by cars and cut the climate impact of the transportation industry. But an electric car is still a car.

Baca argues that EVs actually worsen some problems: Their relatively heavy weight, thanks to carrying large batteries, makes car-pedestrian accidents more dangerous and increases the amount of tire rubber debris that all cars produce as they drive. And at the urban planning level, committing to EVs above all else means continuing to accept a world built for the car and doing little to make cities more walkable or transit-friendly.

“Like so much of this,” she says, “I feel it goes back to [the question of], what do you want your city to be?”

HORIZONS is a series on the innovations of today that will shape the world of tomorrow. This is an adapted version of the July 7 edition. Forecast the future by signing up for our free HORIZONS newsletter.