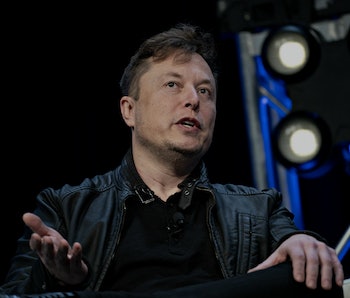 Speaking in a wide-ranging conversation at a satellite trade show on Monday in Washington, D.C., SpaceX CEO and chief engineer Elon Musk dismissed the driving concept behind NASA’s Artemis program, saying that there was no need to use the Moon to get to Mars.

NASA’s Artemis program, according to the agency, "will send new science instruments and technology demonstrations to study the Moon, accelerate plans to send astronauts to the Moon by 2024, and establish sustainable lunar exploration by 2028.” (Elsewhere, NASA says that “to prepare for Mars we must study and prove new human deep space capabilities on our Moon.”)

Although speaking at Satellite 2020, much of the focus for Musk -- who might be expected to talk about the future of Starlink, his fledgling internet satellite enterprise -- was on questions regarding SpaceX's best known feature: its rockets.

When asked if he planned to utilize the Moon as a resource on a trip to Mars, Musk responded, “Uh, nope. Apart from orbital refilling.” Musk compared the voyage to Mars to a seafaring trip between Europe and America.

“If you want to cross the Atlantic, maybe you want to go to Iceland, probably not. To visit, sure, but it’s not like it’s a mandatory stop.”

Sitting on a white lounge chair with the trade show’s chairman, Jeffrey Hill, Musk expounded a variety of topics, jumping from his various company to recent Apple updates to what, if, any, purpose college serves a young person.

Hill gave Musk a warm welcome, complementing the success of SpaceX projects like the Falcon 9 and the Crew Dragon, noting that Musk was on “the doorstep” of a dream that could be realized with the launch of Starship, a long-duration cargo and passenger-carrying spacecraft that will be used for private space travel.

“It’s been a long time,” Musk said. “Eighteen years,” referring to the period when SpaceX was founded in 2002. “A kid could be in college by now.”

“Is it like sending your kid off to college?,” Hill asked.

If Musk felt like celebrating his successes at Satellite 2020, he didn’t show it. He told the mostly industry crowd, gathered in a ballroom at the Walter E. Washington Convention Center that “the thing that concerns me the most right now is that unless we improve of rate of innovation dramatically, then there is no chance of a city on the face of the Moon or Mars. This is my biggest concern.”

He predicted that "If we don't improve our pace of innovation,” he will “be dead” before his dream of Mars colonization is realized. Musk also clarified that there is “zero” chance of SpaceX spinning off his Starlink satellite program into its own company.

Musk referred to the Crew Dragon and the Falcon 9 as “good” and “operational products,” but said that “we need a whole new architecture, that’s what Starship is about.” Starship, which could carry as many as 100 passengers into space at a time, has “been designed to be relaunched an hour after landing,” with only nominal maintenance, he said. “Just like a regular aircraft—the only thing you expect to change is propellant.”

Musk also downplayed SpaceX’s newest technology, a constellation of satellites that will eventually number in the tens of thousands known as Starlink.

“I want to be super clear: it is not some super threat to telecos,” Musk said, referring to telecommunication companies like Verizon and AT&T.”

Musk, who has known to be aggressive in taking on competition, framed Starlink as easing the burden of these companies. “It will help them by serving the hardest-to-serve customers. 5G is great for high-density situations, but it’s not great for the countryside, for rural areas. Starlink will effectively serve the 3-4 percent hardest-to-reach customers.”

Serving major metropolitan areas will be beyond Starlink’s purview, Musk said, noting that the “bandwidth per cell is simply not large enough for widespread use in a major city.”

Hill asked Musk about the company’s unexpected battle with astronomers who have complained that the artificial constellation has interfered with scientific observation. “I am confident we will not cause any impact whatsoever in astronomical discoveries. Zero. That’s my prediction.” Musk blamed the problem on newly launched satellites stabilizing in space, causing them to “tumble a bit.”

Musk challenged the scientific community to identify all of the Starlink satellites, saying that “I have not met somebody who can tell me where all of them are. So it can’t be that big of a deal.” He also noted that SpaceX has been working with astronomers to change the painted colors on the satellites.

During a question and answer period, a student asked Musk about his views on college, noting that while working at Telsa does not require advanced degrees, working at SpaceX does. While he did not address her discrepancy, he expounded a little on the uses of college, saying that the work requirements and social environments were useful for young people.

“Colleges are for fun and to prove you can do your chores,” he said. “But they’re not for learning.”