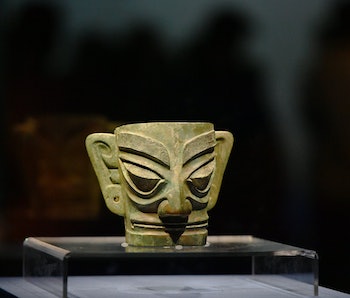 Around 2,300 years ago in a region just north of modern-day Shanghai, scribes recorded six meticulous recipes that have puzzled researchers ever since. They weren’t for a particular food that today’s archaeologists have a hankering for — rather, these directions held the key to forging bronze, one of the Zhou Dynasty’s most prized possessions.

During this era, which spanned 1050 to 771 B.C.E, bronze was used to craft weapons like swords and axes. It also went into cultural and religious artifacts, such as musical instruments and ritual vessels, which laid the groundwork for social and political power in China’s early dynasties.

It’s already possible to recreate ancient bronze, which can be reverse-engineered by modern technology. But archaeologists have struggled for decades to decode the historic formulas written for Bronze Age Chinese craftsmen, which could offer valuable knowledge on the period’s manufacturing techniques.

Specifically, they couldn’t quite tell what mysterious components called Jin and Xi from these formulas referred to. Now, they may have hammered out an answer.

What’s new — To reveal these elusive elements, a pair of researchers from Oxford University and the British Museum dug through previous chemical analyses of ancient Chinese coins that used instruments like spectrometers to reveal the ratios of copper, tin, and lead.

After tracking the distribution of these materials in the various coins (which they used as a proxy for broader bronze production) the authors propose that Jin and Xi referred to specific types of metal alloys — instead of pure metals as previously guessed, the authors reported Wednesday in the journal Antiquity.

“[But] there is a long-term debate as to how ancient China, especially the royal elites, managed to achieve this,” he says. “By decoding [Jin and Xi], it becomes possible to understand what had actually happened in the workshop.”

Here’s the background — One of the reasons the chemical identities of Jin and Xi have proven so difficult to determine: The book containing these recipes, the Rites of Zhou, can be considered more of an administrative handbook for royal courts than a real scientific textbook, says Liu. In other words, these recipes read more like How to Make Bronze for Dummies than a rigorous scientific work.

“The people who can read and write in the Zhou dynasty were very few, so it is entirely likely that the author or authors of the six recipes never did casting,” Liu says. “[B]y no means could the six recipes summarize the rich diversity of alloying practice in Bronze Age China, even just in the Warring States period.”

Due to the Chinese authors’ lack of real-life experience, researchers over the past century have struggled to pinpoint the elements they called Jin and Xi, which should theoretically match the true composition of ancient bronze artifacts.

Why it matters — Despite the text’s shortcomings, Liu says this text still matters to archaeologists because it’s considered the earliest textual record of metallurgical practice — the production and purification of metals — in East Asia.

Even if the six recipes don’t match the true formulas used to cast bronze artifacts at the time, perhaps due to inaccuracies or fictions in the text, the directions could offer important insight into bronze-age Chinese society and the value people placed on metal.

An improved understanding of Jin and Xi’s composition in these recipes can also help linguists study other ancient Chinese texts, Liu and his colleague Mark Pollard write.

What they did — To arrive at this conclusion, Liu says they stood on “giants' shoulders” by reevaluating decades of research on the composition of ancient Chinese bronze. In particular, studies analyzing composition of Chinese coins paved the way for Liu and his colleagues.

Beyond just balancing an ancient equation, the new study offers evidence that bronze production may have been more complex than scholars originally believed, Liu says.

What’s next — This finding opens up shiny new possibilities into the origins of Chinese bronze, and Liu says there’s far more to learn about Jin and Xi. In the future, Liu hopes to study the production of pre-alloyed metals and uncover ancient remains of workshops from this period.

“This is the nature of research,” Liu says. “An iterative process with old questions resolved but new questions emerging.”

More like this
Science
Sep. 23, 2022
Ancient DNA reveals the shocking scale of Anglo-Saxon migration
By Jennifer Walter
Innovation
Sep. 25, 2022
ePlane? Electric planes may come sooner than you think
By Gökçin Çınar and The Conversation
Innovation
Sep. 24, 2022
Audio deepfakes are a major threat — here’s how researchers expose them
By Logan Blue, Patrick Traynor and The Conversation
Related Tags
Share: