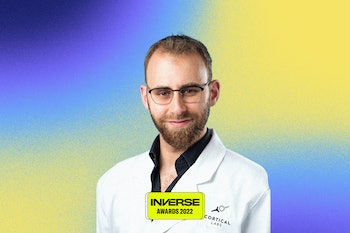 In theoretical physics, there’s the idea of the multiverse, that beyond our observable universe, other universes or dimensions exist and maybe even overlap our own. It's still just a theory, but it makes you wonder what your potential alternate yous may be up to.

Brett Kagan doesn’t give much thought to his multiversal selves, whether or not they followed through with his teenage plan of dropping out of high school. But if the 31-year-old neuroscientist had pursued that timeline, the world today might be far behind in our understanding of the raw power of biological intelligence and our attempts to meld human brains with machines.

This October, Kagan and his colleagues at Cortical Labs in Melbourne, Australia, published results of a development that took the world by storm: Lab-grown brain cells in a dish learned to play an abridged version of the classic computer game Pong. That may sound utterly trivial or even Frankensteinian. But the endeavor could make studying the human brain — a notoriously hard organ to investigate — far easier. And in doing so, this achievement could enable researchers to study neurological conditions like epilepsy, depression, and schizophrenia in ways that were previously impossible, opening up the doors to novel treatments.

The luring call of psychology and cyborg mini-brains

Born in South Africa and raised in Australia, Kagan’s interest in the three-pound quivering mass of neurons didn’t arise from any bright-eyed childhood fascination. He had no love for academia — let alone science — and planned to cut his education short in high school. But one class lured him away from those shores toward the tantalizing siren call of psychology.

“I must admit, initially I thought, this [was] a very funny joke…no one is going to give you money to do this sort of wacky, out there, bleeding edge work.”

“I took a linguistics course in my final year,” he says. The psychology behind how we learn and understand language fascinated him. “[And that’s] when I decided to start taking school seriously.”

From this newfound enthusiasm came a scholarship to double major in law and psychology at Bond University located in Queensland’s Gold Coast, a city an hour’s car ride south of Brisbane. Kagan’s initial thought was to use law to channel his psychology interests and potentially become a forensic psychologist or a lawyer specializing in the field. But just as linguistics tempted him away from abandoning school, a class in cognitive neuropsychology forced him to consider the cellular drivers of human behavior: neurons.

Kagan went on to study stem cells, investigating their use in neonatal stroke, a condition with devastating consequences that’s more common among babies born prematurely. In 2019, he joined Cortical Labs, the brainchild of Hon Wong Chong, a former doctor, and Andy Kitchen, an experienced software engineer, the company’s founders. The duo had a grand vision for their newly minted company, which was to pull a Terminator or The Matrix-esque integration of human neurons and silicon chips.

“I must admit, initially I thought this [was] a very funny joke…no one is going to give you money to do this sort of wacky, out there, bleeding edge work.”

But that joke — now called DishBrain, aka the clump of neurons in a dish that can play Pong — is now a proof-of-concept study that Cortical Labs hopes to scale up to an operating system running on biological intelligence.

How to teach a glob of brain cells to play Pong

The cyborg min-brain works like this: Around 800,000 human neurons, grown from a type of stem cell called a human-induced pluripotent stem cell (hiPSCs), are grown on a special silicon chip. The chip is connected to a computer, where the game is played on the screen. Kagan and his colleagues simplified the game, making it so that there’s a single paddle on one side of the virtual table.

Electrical signals conveyed via the chip to the neuronal network told them whether they hit the white dot and relayed that information to the computer. At first, the neurons weren’t really good at their easy-mode Pong. But, over time, their game improved, missing less and making more consecutive hits after 20 minutes of play.

As Kagan points out, the neurons don’t have eyeballs, nor do they have emotional incentives to play, unlike a fully-formed person after a loot box. So what’s motivating them?

The free energy principle has become a unifying theory, much like how psychohistory in Isaac Asimov’s Foundation series boils down psychology, history, and physics to statistical science. Kagan says the free energy principle is helpful in understanding what motivates biological intelligence and separates it from artificial intelligence, which is largely programmed to be goal-directed through reinforcement learning.

“It makes sense, of course, because biologically, we’ve evolved to learn and act in real-time with low samples and high power efficiency,” says Kagan. “If you see a tiger, you can’t look at it 100 times, let alone twice, to decide do I run or not run? We have to evolve to be adaptive and quick.”

Because of the tens of thousands of connections a single neuron can make with other neurons, it’s difficult to ever replicate or mimic this synthetically or algorithmically, which is why we need to develop technologies imbued with the computational power of the human brain, says Kagan.

This all may sound like a lead-up to sentient robot uprisings or a Cyberpunk: Edgerunners dystopia, but don’t worry — neuron-powered computer chips are a far-distant future, if scientists do manage to get there. At present, Kagan says, DishBrain could be used as a sandbox for pharmaceutical drug testing and seeing how substances like alcohol affect a neural network’s ability to process information. Going further, Kagan and his colleagues at Cortical Labs are hoping to use DishBrain, and its future iterations, to better understand neurological conditions like epilepsy, depression, and schizophrenia. Such efforts may open up possibilities for alternatives to testing new drugs or gene therapies on animals, says Kagan.

“Unless you’re looking at how neurons are adaptively processing information, you’re not looking at the truest, most fundamental function of the neural system.”

“What people have done in a dish is looking at cell survival, at biomarkers, [and] activity and firing [of neurons],” he says. “But the point of a neuron or a neural system isn’t just to fire or not fire, it’s to be able to take information from its environment and adaptively process it. Unless you’re looking at how neurons are adaptively processing information, you’re not looking at the truest, most fundamental function of the neural system.”

It took 18 months for Cortical Labs to develop and test DishBrain, most of which occurred during Australia’s stringent Covid-19 lockdowns restricting how long and how far people could travel from their homes. While Kagan got an exemption for working in the medical field, hours spent in the lab growing neurons and tweaking experiments were initially spent in solitude without the in-person camaraderie or discourse with his fellow scientists.

“It was a very weird experience and a little frightening as well,” he says as a new career scientist navigating what was for him somewhat unchartered territory in neuroscience.

But this uncanny experience also embodies the essence of Dishbrain and the future of synthetic biology it hopes to usher: Very weird, a little bit frightening, but perhaps the key to solving problems artificial intelligence can’t touch.

Correction 12/30/2022: This article has been updated to correct several factual mistakes. Andy Kitchen (not Andrew Doherty) co-founded Cortical Labs. Karl Friston is not a shareholder. And play sessions lasted 20 minutes, not 15.