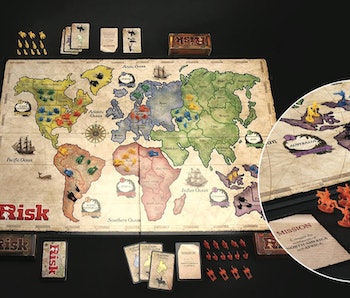 While you might not think of war games like Risk or Axis & Allies as likely conduits to increased pair bonding, it turns out that all of that imaginary blood and guts — not to mention the fierce (if friendly) competition — may actually bring you closer together with other players. A Baylor University study of 20 couples found that oxytocin levels in their urine samples were higher after the participants played board games with their partners. So whether you're curling up with a significant other or battling it out with friends, the best war board games may provide you with more than just a fun Saturday night. They incorporate strategy, skill-building, and storytelling — all in one fell swoop.

There's a wide variety of war-based games out there to choose from. Choosing the right one is largely a matter of personal preference, depending on your interests and which types of storylines or visual graphics you like. Some war games, for example, are rooted in historical events or realist fiction while others involve complicated fantasy worlds full of elves, gnomes, and other make-believe creatures.

Below are a handful of the best war board games, ranging from a decades old classic to a modern cult favorite. Read on to find the winning addition to your next game night.

The low-down: You'd be hard-pressed to find a more classic war board game than Risk. Often ranked among the best board war games of all time, this oldie-but-goodie has been playfully pitting families and friends against each other since 1957. The board itself is a map of the world that's been divided into 42 territories across six continents, and the object of the game is to take control of them all. Over the years there have been at least three dozen versions of Risk, including spinoffs like "Risk: Star Trek 50th Anniversary Edition," "Risk: Game of Thrones," and "Risk: The Walking Dead Survival Edition." The original, however, has remained a beloved staple that reviewers called "fun," "challenging," and "strategic."

One reviewer wrote: "The simple layout and reliance on social interactions makes this game a classic hallmark of the strategy board game genre. By your first turn you will be fully enveloped by the game-- strategizing attacks, forming alliances and collations, checking on your enemies, conquering whole continents-- this game is for the old and the young. I give this board game a rating, worthy only for the most classic and ground breaking of board games, 5 stars!!!"

The low-down: This cult favorite hasn't been around as long as Risk but has nevertheless gained tremendous popularity since its inception in 2011. The tabletop war game, which is a spin-off from the original seven-person "7 Wonders" game, is specifically designed for two people (hence the name "Duel"). Build a civilization from the ground up, guide it through three Ages, and fight your foe to maintain your empire. If you can successfully invade your opponent's capital, win the most victory points, or get a monopoly on scientific advancement, you win.

One reviewer wrote: "This is the best 2-player game I have ever played, bar none. [...] The titular Wonders are very well done, in both their art and their mechanics. They provide a race mechanic (8 are dealt, but there can only be 7 on the board!) and are incredibly helpful with their game-altering mechanics, but they are not inherently overpowering. I have still won games where my wife dropped all four of hers on the board in one fell swoop. Again, that's rare, but it's yet another example of how you aren't out of the fight until its over!"

The low-down: If you're into navigating dystopian landscapes and fighting your enemies amid post-nuclear wastelands, it doesn't get better than "Fallout." This ultra-popular conquest board game, which is inspired by the apocalyptic role-playing "Fallout" video game series, offers players a retro-futuristic world in which survivors can battle one another as they attempt to complete special quests. It's set in an atompunk alternative U.S. history wherein the transistor was never invented, resulting is strange technology and bizarre characters.

One reviewer wrote: "Wow! This is a FANTASTIC game. Very well detailed that really evokes the Fallout video game series. We love this game! The parts are well made and feel sturdy. Lots of clever details. Thank you for this awesome boardgame!"

The low-down: Similarly to Risk, Axis & Allies is an iconic staple of the war board game genre. Although it's not as old as its predecessor (the first edition came out in 1981), it does invoke the same "invade and conquer" mentality. The "D-Day" version here is set during World War II's Battle of Normandy, an event that places you right in the middle of the action as the Allies liberate France. It's chock-full of real-life details for the history nerds out there, and it can be played with just two to three players.

One reviewer wrote: "One of the most playable war games on the market. The field of battle is so balanced that each time we play it, the outcome (victory) comes down to the last of the pre-established play round. Though it is listed for two to three players, we've adapted it to four, that has worked out well. This is my favorite of all the A & A games."

The low-down: For lovers of fantasy, the Immortals board game provides an exceptional combination of excitement, adventure, and challenge. It's designed with beautiful, if slightly frightening graphics that depict characters such as necromancers, halflings, demons, trolls, and other fantastical creatures. Players battle one another in an attempt to take oversee the different worlds of light and shadow.

One reviewer wrote: "Unique game with good replay value. Steep learning curve but once you get it the game plays fast."

6. The one for chess lovers

The low-down: The ultimate game of strategy, War Chest is one of those board games that chess enthusiasts will adore. It follows similar rules except that to play, you pick a side (either wolves or ravens) and attempt to conquer the other player's "pieces" (which are actually just control points that you must collect faster). Like traditional chess, it has kings, queens, and entire armies of soldiers.

One reviewer wrote: "Awesome game! So many strategic possibilities. There’s a good balance of risk combined with ways of mitigating said risk. It’s very rewarding to win, and only motivates you to play more when you lose. Plays great with two and four players. The component quality is great, too."