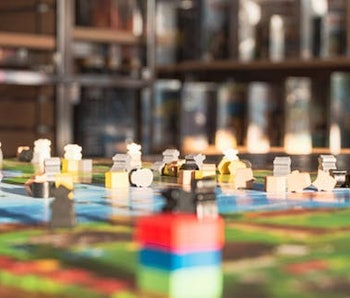 Here's something to chew on: It turns out there's probably a very scientific reason you're a die-hard fan of board games like Catan. A 2017 study found that positive social interactions release oxytocin — a feel-good, bonding chemical that lights up reward centers in your brain. (Of course, I can only surmise that these reward centers light up even more in the presence of real-life humans, instead of the, uh, 2-D versions of people popping up on your phone screen.) So yeah, there's a justification for just how much you look forward to Saturday game nights with your buddies.

Of course, as is the case in Catan, it is kind of odd that this bonding comes in the form of stealing resources from your friends, enduring punishments like being banned from the room, and triumphing over everyone else by being the player who completes the building of a tower for an eccentric billionaire, but, hey — there's a reason it's called friendly competition.

And while Catan continues to be a tried-and-true favorite of game players, there's something to be said for injecting something new into your Saturday night game hangs. So if you’re looking to shake things up a bit and want to take on a new challenge, here are a few awesome board games to get your oxytocin pumping.

If trading in Settlers of Catan is is your thing, you may want to check out Bohnanza by Rio Grande games. In this game, you'll be trading beans instead of trading resources. Yes, beans. And in this game, you certainly reap what you sow. Literally. Here's the deal: You’re a bean farmer and your objective is to grow bean fields that earn you gold. Plant the beans you think will do well, and trade the beans you have a bad feeling about. Bohnanza has over 1,200 five-star ratings on Amazon, with users admitting it sounds lame, but is actually surprisingly fun. It's recommended for two to seven players and average playtime is 45 minutes.

Fans say: "We got hooked on this one the first time we played and had to buy our own copy. Every time we play with friends they also get hooked on it and want a copy. This game is so much fun, and so simple to learn, and it makes for a really great party game. We love hosting game nights with this game and always get requests to play it. Highly recommended to play with a group, but it's still fun even with 2 people!”

If you like the route planning element of Catan, Ticket To Ride might be a good choice for your next game night. In Ticket To Ride, players race each other to build rail lines across North America, and each player must attempt to grab rail lines that will help them build the longest route. And if you can manage to connect two distant cities, you'll rack up even more points. Ticket To Ride is another game with extremely high ratings on Amazon. It's recommended for two to five players, aged 8 and up, and average playtime is 30 to 60 minutes.

Fans say: "There's enough strategy in it that you can make or break your game on your own merits, but there's also enough element of chance in it (and the strategy isn't typically too deep) that younger kids will enjoy it too (as long as they're old enough to grasp the game mechanics in the first place). Light-hearted, fairly fast-paced, and - excuse the cliche but seriously - fun for the whole family!"

3. This Cave Man Game That Requires You To Build A Civilization

Travel to the very distant past with Stone Age, where players assume the role of hunters, farmers, toolmakers, and collectors, attempting to build homes and create the most advanced civilization. It's a strategic worker placement game — which means that placing your piece on a certain part of the board gives you the right to perform certain actions — but there's also chance involved; with a roll of the dice, players can add tools to their arsenal, gather essential resources, feed their people, and increase their population. Stone Age is recommended for two to four players above the age of 9, and the average playtime is 60 minutes.

Fans say: “Very easy to learn and extremely easy to teach. The game takes under 2 hours to play which was a "must" for me because let's face it we all have lots to do and very little time to do it. Overall, this is a great game and I would recommend as a lighter board game that has some luck involved but still plenty of strategy to make everyone happy."

4. A Game In Which You Trade Spices In The 15th To 17th Centuries

In this deck-building game, players become ancient spice traders working on trading routes that existed in the 15th to 17th centuries. Players compete for cards and resources in the marketplace that will empower them to buy "victory cards." It starts out simply, with players amassing more purchasing power (spice cubes, coins) as the game continues. Like every other game in this roundup, Century Spice Road is also highly rated on Amazon with players consistently commenting on its gorgeous artwork and ease of play.

Fans say: "We play this game a lot because it is easy to set up, attractive to look at, and fun to play. My game groups encompass all ages, and this game appeals to a wide gamut of players, young to old, experienced to newbies. Components are attractive and the artwork is lovely. [...]This is not a super complicated Euro game, but has enough depth to make the game enjoyable for many repeated plays.”