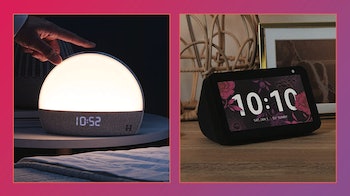 Even science agrees that hitting the snooze button probably won't make you feel more refreshed when you finally do get out of bed — but luckily, there are technologies which might it much easier to wake up. The best smart alarm clocks wirelessly connect to your other devices, making it much easier to customize your wakeup, and also adding functionality like phone chargers in the process. That said, while all of these sync up with other devices in your home (primarily your phone), their specific features vary a lot. As a result, the best smart alarm clock for you will largely depend on how you plan on using it.

First, let's talk voice assistants. Most of the leading smart alarm clocks (though not all) feature built-in voice assistants like Google, Alexa, and Siri so you can control it using just your voice. For some, this feature is a must — but for others, it might act as a distraction that interrupts their sleep hygiene practices.

Another popular feature is a built-in phone charger, whether it's in the form of a USB port or a wireless Qi pad, making it just a little easier to charge your devices overnight. (All but two options on this list have some kind of charger for your phone.) Then there's the ability to double as a Bluetooth speaker. This feature could make it easier to play soothing sounds at night, or it could help you to wake up in the morning, but either way, it's a popular function that buyers tend to love.

Of course, those aren't the only features out there — some smart alarm clocks also function as stationary tablets, white sound machines, and sunrise wakeup lights. Scroll on for five smart alarm clocks that just might make getting out of bed a little easier.

1. The best smart alarm clock with a screen

The Echo Show 5 has a tablet-like visual display that adds convenience to any room of your home, but given the fact that you can customize the clock face and set alarms using only your voice, it's a great bedside accessory. Thanks to the 5.5-inch screen, you can actually see your to-do list, calendar, or commute as you're getting up — or you can watch TV shows, make video calls, or listen to podcasts. Since it's Alexa-enabled, you could even use this one to control your smart lights, view your security cameras, and adjust the temperature on your smart thermostat. No wonder it has more than 300,000 reviews.

One reviewer wrote: "Mainly needed an alarm clock in the bedroom and the Echo Show 5 is perfect. Also love having a screen to view items during the news briefings or other visuals. I did set the 'Try Alexa' info to show only once, which means only after I give a command does it show up (and only once)."

If you're on a budget, the iHome dual alarm clock is the way to go. Despite its $43 price tag, it works with both Siri and Google Assistant so you can stream music, check the weather, and set alarms using only your voice. You can also charge your devices using the USB port in the back, and you can use several different sources for your alarm sounds, including Bluetooth music, the built-in FM radio, and the four different pre-programmed tones. It's not loaded with features, but reviewers have found it to be sleek, reliable, and affordable.

One reviewer wrote: "It is sleek and looks great on my desk at work. I am able to listen to radio, charge my phone, set the alarms, and see the time all day! I love my new addition to my work space."

The 4th generation Echo Dot features a minimalist spherical design and a simple LED display that tells you the time, which is why it's a best-seller in alarm clocks on Amazon. Since its main purpose is to deliver hands-free Alexa to your home, however, you can also use it to easily set timers and alarms, play your music, control your compatible smart devices, check the weather, read your to-do lists and schedules, and make hands-free calls, all using your voice. You can get it in white or blue, and the on-device controls allow you to manually change the volume or turn the mic off entirely for some privacy.

One reviewer wrote: "I’ve been wanting our bedroom to be 'phone-free' since we spend too much time looking at dumb things on the internet and not enough time talking to each other or sleeping, so I got these for alarm clocks. Much better than a traditional alarm clock and I love that I can set them up in stereo so they both play together and sound great when we’re listening to music in the bedrooms."

Instead of harsh noises that yank you out of sleep, sunrise alarm clocks rouse you gently using a gradually brightening light. As a result, they aim to "hack" your circadian rhythm so you feel more rested. That said, most best-selling wake-up lights don't qualify as smart alarm clocks — but the Hatch Restore does. That's because it has a free companion app (for iOS and Android) that lets you control the brightness, color, and start time of your sunrise clock. It also has a built-in sound library with soothing white noises and meditations that block out disturbances and help you relax. It can even be used as a soft reading light. Note that it doesn't contain a USB charger, a smart assistant, or a Bluetooth speaker — but for those who are trying to improve their sleep hygiene practices, that could be a good thing.

One reviewer wrote: "Restore has enabled me to establish a consistent nightly routine, made better by the inclusive content library that I can control from my phone. [...] If you’re looking to get great sleep naturally and need some help, this product is fantastic. I'm still surprised by the immediate and noticeable impact this product has had on my daily life!"

5. The best with a Qi wireless charger

Because it wirelessly charges your compatible devices (including iPhones and Samsung phones) using Qi technology, the Anker alarm clock is a high-tech addition to your bedside table — but that's not all it does. It's also a Bluetooth speaker, white noise machine, and FM radio, all of which can be controlled with the easy-to-use app. You can also use it to choose your sleep and wake-up sounds, not to mention customize the brightness of the LED display (which also automatically adjusts depending on the light in the room). However, there's no voice assistant with this one.

One reviewer wrote: "Bluetooth speaker, radio, alarm clock, sound machine and wireless charger all in one. Looks and sounds awesome, charges my iPhone 11 pro fast with a medium thickness case [...] I love this thing. You do need to download the app to use it, but the app is clean and works perfect."