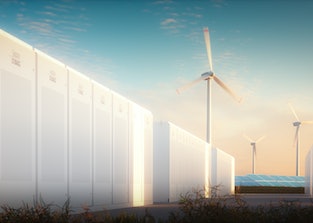 Batteries, those irritating squares inside phones that everyone loves to hate. But while they may help gadgets cut the power cord in consumer electronics, their energy-storing abilities could help humanity transition away from fossil fuels. A slew of technologies could take those abilities to new levels.

While the likes of coal and gas are easily scaled to match grid demand, renewable energy sources like wind and solar provide power on an intermittent basis. An energy storage solution can collect the power as it’s generated, then distribute it 24 hours a day. Throw vehicle-to-grid technologies into the mix, which enable electric car batteries to plug into the grid and play the same role, and you have a comprehensive green energy storage plan.

But lithium-ion batteries can be expensive, dangerous, slow to charge, difficult to mine and hard to recycle. They cost around $156 per kilowatt-hour, a figure that adds up when placing a 100-kilowatt-hour battery into a high-end electric car. Wood Mackenzie research found global lithium-ion production reached 285 gigawatt-hours per year by November 2019. The researchers claim that’s around enough batteries to transition the eastern and central United States grid onto renewables, not quite enough for a full-blown global transition.

There are efforts on these fronts to make batteries better. Firms like Tesla are working to remove controversial elements like cobalt, while big factories like CATL are seeking to bring prices down by increasing production.

Some of the biggest energy storage breakthroughs could come from more fundamental research. Here are the coolest battery technologies set to make a splash.

Picture a giant vat storing a liquid, which can hold large amounts of energy. That’s the basic idea behind a redox flow battery, an alternative approach that could enable giant, cheap batteries for grid-scale storage.

In a traditional lithium-ion battery, the active materials that store the charge are solid. The battery is filled with a liquid electrolyte solution, which enables the electrons to move around and leave the battery. Redox flow replaces the solids with a liquid alternative, while also decoupling from the electrolytes to place them in separate tanks.

James McKone, assistant professor at the University of Pittsburgh’s Swanson School of Engineering who is researching redox flow batteries, tells Inverse that the best analogy is to think about food. A lithium-ion battery is like a pre-prepared TV dinner where the energy is ready to go. Redox flow batteries are more like a giant grain silo: it’s a cheap way to store a whole lot of food, but it’ll need some processing first.

“That is expected to give several really important advantages when you implement the battery on a very large scale,” McKone says. It means a much lower cost per delivered unit of energy, a difference that gets larger with more storage as it’s just a case of making the tanks bigger.

It’s not all good news at this stage. The energy density is also much lower versus a regular battery. That’s fine for grid-scale applications, but terrible for electric cars where space and weight are a premium. Researchers have also struggled with issues like expensive fluids, which have pushed manufacturers away from scaling up production versus lithium-ion. UtilityDive reported in 2017 that 97 percent of grid-scale installations in the United States over the past two years used lithium-ion.

Kore Power, which Gorrill claims is the only firm he’s aware of fully focused on lithium-ion grid storage, can leverage a few advantages due to the unique nature of grid storage. Their rack systems reach up to the 1,500-volt range, which reduces the amount of energy loss. Gorrill also claims that, as the firm cares more about saving space than saving weight, it’s able to save suppliers money by reducing the amount of land use.

In many respects, water-based batteries are nothing new. Lead-acid batteries use water mixed with sulfuric acid as their liquid electrolyte. Water-based cells could be cheaper in terms of raw materials, safer for the environment, and from a scientific perspective could hold great promise.

“I’m very pro-water as the basis of battery technology,” McKone says, who describes them as an “underdeveloped opportunity.” The reason they have been under-explored, McKone suggests, is because lithium-ion can reach much higher voltages than current water-based batteries.

While lead-acid batteries are toxic and environmentally harmful, research into water-based cells has shown promise. A team of researchers at Stanford University in 2018 developed a manganese-hydrogen battery that could withstand 10,000 charge cycles. The cell could also store enough energy to power a 100-watt bulb for 12 hours at a cost of just one cent.

Batteries can take around 100 years to decompose, and research from Texas A&M University found that only around five percent of lithium-ion cells are recycled. A biodegradable battery could make them more environmentally friendly.

Texas A&M researchers in August 2019 announced they had built a battery that used polypeptides as opposed to metal compounds. The team is hopeful that such technologies could work for wearable sensors and other applications where longevity is less of an issue.

But research in this area is otherwise limited. McKone says the prospects are “really exciting,” particularly from an environmental perspective.

“I’d even go so far as to say I would love to build a compostable battery, which is that not only does it degrade, but it actually feeds the earth when you dispose of it,” McKone says.

These lithium-ion batteries replace the liquid electrolytes with solid components instead. That means they remove the flammable hydrocarbons, making them more suitable for electric cars. They could also store more energy: Doug Campbell, CEO of Solid Power, told Inverse in January 2018 that they could store twice the amount of energy.

While more energy and better safety seem great, they come at a cost. Solid electrolytes don’t flow through the battery so easily, which leads to longer charging times. As the electric car industry manages to reach below half an hour to recharge a car, it’s a sacrifice drivers may be unwilling to make.

“Most of the solid-state stuff that I’m aware of, I would describe it as incremental,” McKone says.

Grid-based energy storage could come from thermal heating. Sweden-based Azelio has developed a long-duration thermal battery, which heats a recycled aluminum alloy to 600 degrees Celsius. This can be transferred to a generator for on-demand, zero-emissions energy. It doesn’t use rare elements like the cobalt found in lithium-ion batteries, and the company claims it doesn’t degrade over time.

“What’s really needed out there is a way to build this decentralized renewable energy storage, and to have dispatchable renewable electricity available 24 hours a day,” Jonas Eklind, CEO of Azelio, tells Inverse.

The idea bears resemblance to concentrated solar power, where mirrors concentrate rays onto a tank that heats an internal material like molten salt. This is then stored, then used to generate steam and turn a turbine when needed. But Eklind claims Azelio’s technology, paired with traditional photovoltaic solar cells, would be more cost-efficient, particularly on the smaller scale.

Although it’s in the early stages, Azelio is developing three verification projects in Morocco, Sweden and Abu Dhabi. The goal will be to start industrial production in the summer of 2021, producing 19.6 megawatts per year.

More like this
Innovation
Jan. 16, 2023
An ambitious plan could help repair one of California’s biggest ecological catastrophes
By The Conversation, Robert Glennon and Brent Haddad
Innovation
Jan. 25, 2023
Starship orbital flight: SpaceX successfully loaded the rocket with over 10 million pounds of propellant
By Mike Brown and Molly Glick
Innovation
Jan. 25, 2023
Watch: This jail-breaking wireless robot melts and reassembles on command
By Jennifer Walter
LEARN SOMETHING NEW EVERY DAY.
Related Tags
Share: