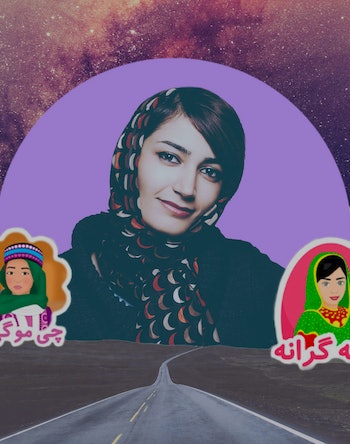 To usher Afghanistan into the future, entrepreneur and educator Fereshteh Forough turns to a poet of the past for inspiration.

“Where there is ruin, there is hope for treasure,” wrote the Persian poet Rumi during the 13th century.

“Being born as a refugee and living a decade of my life in a conflict zone in Afghanistan, this really resonates with me and reminds me that, from the ruins of a shattered nation and the lives of refugees can come treasure. And for me, the treasures are the girls in Afghanistan,” Forough says. “By investing in their education, we can build Afghanistan 2.0.”

To help build “Afghanistan 2.0” — transforming the nation after decades of political unrest — Forough founded non-profit organization Code to Inspire (CTI), a school in Herat, Afghanistan, where young women learn coding skills so that they can compete in the global tech market and be empowered financially and socially.

Code to Inspire opened in November 2015 in a nation where, even years after the end of the Taliban’s rule, an estimated two-thirds of girls do not attend school, and many women still face cultural and institutional roadblocks to employment and financial independence.

Born in Iran after her family fled Afghanistan when it was under Soviet control, Forough now lives in Brooklyn. She spoke with Inverse on a recent Friday morning phone call from her apartment, when she was in the midst of working on logistics for an upcoming fundraising campaign for Code to Inspire.

A computer chose Forough for her university’s computer science program.

She’d taken an entrance exam, struggling to answer the math, physics, and chemistry questions after specializing in literature as a high school student in Iran. An algorithm then assessed her exam answers and selected her field of study at Herat University in western Afghanistan.

When she learned of her placement in the university’s new computer science program, “I got so upset. I cried,” Forough recalls. She told her parents, “I don’t want to go,” but her father encouraged her to give it a try and pointed out that she may have been selected for the program because of her strong English language skills — code is, after all, based in the English language.

Forough was 17 years old at the time. Her family had just returned to Afghanistan, one year after the end of the Taliban’s rule there. Amid struggles to fit in with her Iranian accent and Iranian-style clothing, she began university classes in a subject she feared she’d hate. On the first day of classes, her math course wasn’t encouraging. But in Introduction to Programming the next day, she started to hit her stride.

“I liked it because it was more like a puzzle, like a game. I liked the creativity of it,” Forough says.

After completing her bachelor’s degree — often studying by candlelight, as electricity was available for only three hours per day in Herat — Forough went on to earn a master’s degree from the Technical University of Berlin, and then she taught computer science at Herat University for nearly three years. The first non-profit she co-created provided digital literacy education to girls in 13 Afghan schools.

“To me, education is a very basic human right,” Forough says. “Shelter, food, and health are very important for every human being. I think education is also a necessity, and no one should be discriminated because of their status.”

During the Taliban’s rule in Afghanistan, from 1995 to 2001, education was prohibited for nearly all girls and women. But education wasn’t a given for Forough and her siblings in Iran.

“In Iran, as a refugee we had to provide certain papers from the government to show to the schools every year so they would let us, as refugees, go to the school,” Forough explains. “If, for whatever reason, we couldn’t get that paper, we would have missed one year of education — which happened to one of my siblings. So growing up, that fear of ‘I will be able to go to school or not?’ was always with me.”

Code to Inspire currently offers classes on game design (using game engine Unity), mobile applications, web development, and graphic design, plus a new class that began about a month ago on blockchain and cryptocurrency. Teachers primarily speak with students in Farsi, but teaching materials such as slides, reading materials, and exercises are in English.

“We encourage them to improve their English skills because, of course, the coding language is English, but also for them it is better to know in case they want to work with people outside of Afghanistan,” Forough explains.

Initially, CTI’s teachers were volunteers (primarily people who had been Forough’s students when she taught computer science at Herat University), and then further fundraising enabled Forough to make those teaching jobs part-time and full-time paid positions.

CTI launched after an IndieGoGo campaign that raised $22,000 and with funding from Github and the Malala Fund, along with a donation of 20 laptops from Utah-based company Overstock.com. Since then, the school’s doors have been kept open thanks to individual donors and grants like Google’s RISE Award, which granted CTI $25,000 in 2016.

Forough regularly communicates with CTI’s students via Skype, providing mentorship on projects and supplementing the material taught by teachers on-site. She’s lived in New York since 2012, originally planning to do work there for a few months for a few non-profits, and then she changed her immigration status, first living on Roosevelt Island before moving to Brooklyn.

Concerns that she wouldn’t be permitted back into the US if she were to leave — further complicated by the Trump administration’s travel ban, which impacts people who were born in Iran — have kept Forough from visiting the school that she shepherds remotely. She is fond of the life she’s built in New York — she loves the city’s energy and its diversity — but says, “if I get a chance to be able to travel without any problem, I would love to spend at least half my time in Afghanistan and half here.”

Among the recent projects created by CTI students is a set of stickers for use on WhatsApp, Viber, and Telegram.

Students in CTI’s graphic design class created the stickers after observing Afghanistan’s lack of representation in social app stickers. “There were some Farsi stickers, but they’re Iranian with the accent or expressions. A lot of Arabic stickers. But not Dari stickers,” Forough says. (Dari is the variation of Farsi used in Afghanistan.)

In the students’ sticker pack, released at the end of May, one sticker depicts a woman working on a laptop accompanied by the phrase “seek knowledge” in Farsi. (With a red headscarf and blue eyes, the woman on that sticker is modeled after the iconic 1985 National Geographic cover featuring a photo of an Afghan girl since identified as Sharbat Gula.) Another sticker depicts two women holding baskets of harvested saffron, with a phrase meaning, “It was successful.” (Afghanistan is currently the third-largest saffron producer in the world.) Other stickers nod to the widespread love of tea among Afghans and to the country’s minority Sikh population.

The sticker release prompted local TV stations and publications to interview CTI’s students. “We received a lot of great feedback from the community,” Forough says, adding that her students hope to create a second sticker pack.

Also, in May of this year, the students in the game development class released a game called Afghan Hero Girl. Available on Google Play and iOS’s App Store, the game features a female superhero in a traditional Afghan outfit.

Most encouraging to Forough was the positive feedback on the game shared by Afghan men. Previously, men were posting messages on CTI’s social media accounts mocking the students’ projects and saying things like, “Why are girls making games? They should be in the kitchen” or “These skills are useless for women.”

“It was such a transformation,” Forough said. “Such a moment for me to see that change is coming.”

Code to Inspire’s students are achieving Forough’s vision of financial empowerment for Afghan women. Among the graduates of the school’s two-year program, about 80 percent hold jobs using the skills they learned at CTI. Some work from home for companies based outside Afghanistan — one graduate is the mobile app developer for a company in Iraq — and others work for local businesses. Forough says with the outsourcing projects assigned to students, “the money goes right to the girls’ pockets,” earning them each between $50 and $400 per project.

“They’re making two times or sometimes three times the average income of their family members,” Forough points out. (According to the Asia Foundation, the nation’s average monthly household income as of 2016 was 10,949 Afghanis, equivalent to $165.)

As for Code to Inspire’s future, Forough and CTI treasurer John Lilic hope to open one or two more coding schools in Afghanistan within five years. Forough is considering Kabul and Mazār-i-Sharīf (the nation’s largest and fourth-largest cities, respectively) as sites for those schools, and says both have areas where female students could safely travel to classes.

Then, within the next decade, Forough plans to start opening CTI schools outside of Afghanistan: elsewhere in the Middle East, as well as Central-South Asia and parts of Africa, places where women are oppressed or very underrepresented in tech fields.

“My goal is to have this place for girls in any part of the world who face the same problems and situations as the girls in Afghanistan and connect them to the global market,” Forough says.

That kind of expansion beyond a school that has thus far served 150 students may sound daunting, but Forough sees CTI’s performance in Herat as a harbinger of success elsewhere.

“I always tell people that I started from a place that is impossible. Afghanistan is an impossible place,” Forough says. “If I can prove that I can make this happen there, then I can make that happen in any part of the world.”