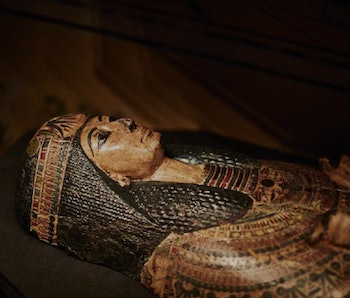 It’s how the latest Star Wars film opens, but an international team of scientists have taken a step towards making the imaginative phrase a reality. Using 3D-printing, the team was able to recreate the vocal tracts of an ancient Egyptian priest named Nesyamun and use them to produce a single sound.

Like fingerprints, the exact dimensions of every person’s vocal tracts makes a unique sound. That’s true of Nesyamun, who used his voice more than most during his life. Nesyamun lived during what paper authors David Howard of University of London, Royal Holloway, John Schofield of the University of York, and others describe as “the politically volatile reign of pharaoh Ramses XI (c.1099–1069 BC) over 3000 years ago.” He found work as “a scribe and priest at the state temple of Karnak in Tebes (modern Luxor).” Crucially, the paper authors note, “his voice was an essential part of his ritual duties which involved spoken as well as sung elements.”

Nesyamun has been resting in Leeds, England, since 1824, when a British banker acquired him through a series of purchases that began with an Italian tomb raider stealing his body. Since then, Nesyamun has been the subject of continual study by British scientists. They’ve determined many things about him, including what his face looked like and his cause of death (a bee sting, to which he was allergic).

The team behind this project, dubbed “Voices from the Past,” believe that Nesaymun’s life makes him as willing a candidate for this project as possible. While the dead can obviously not consent to scientific experiments, the team notes in their paper in Scientific Reports that Nesyamun had a “documented wish to be able to speak after his death,” hoping to converse with Egyptian gods. While the scientists are not those, they felt that non-destructive techniques could give Nesyamun a chance to be heard again.

To measure his vocal tracts, the team first took a computerized x-ray scan known as a “computed tomography”, or CT, scan. During a CT scan, x-ray measurements are taken from a variety of angles. The scans of Nesyamun revealed that the elaborate mummification process that took place thousands of years ago has still held strong: both his larynx and throat remained in place, although his tongue had lost its muscular bulk.

After the CT scan, the team used software known as ITK-SNAP, which can create 3D models of human tissues and is typically used for medical imaging. The team describes the process as one of “trial and error,” but was eventually able to create a working model.

After creating the model, researchers sought help from an unexpected source: a new musical instrument. In 2018, another researcher at Royal Holloway created the Vocal Tract Organ (VTO), meant to be a new type of instrument. The VTO is meant to recreate human sounds, and “offers a much more human and natural sounding result than the traditional Vox Humana stops found in larger pipe organs,” according to its creator.

The team connected the 3D vocal tracts to the VTO, and the VTO to high-end Adastra speakers, typically used for public address systems.

“This research is the proof of concept for accurately recreating a vocal sound from the past,” John Schofield tells Inverse via email. “The next stages of the project would include modelling to create additional sounds with a view to forming words and sentences. This represents the vial first stage - that the technique works, allowing Nesyamun to emit a sound after 3000 years.”

The sound, which is meant to replicate a vowel sound and land between the words “bed” and “bad,” is a step on what the team hopes is a long journey. Hypothetically, the technology could be used with any ancient figure, provided their vocal tracts are intact, allowing for the historical record to become radically more personal.

The brevity of the sound did not weaken the emotional impact on the team. Schofield tells Inverse that the project team was “all together when we heard the sound for the first time - for me it felt a bit like shining the torch into Tutankhamun's tomb and seeing something that hadn't been seen in thousands of years!”

Abstract: The sound of a 3,000 year old mummified individual has been accurately reproduced as a vowel-like sound based on measurements of the precise dimensions of his extant vocal tract following Computed Tomography (CT) scanning, enabling the creation of a 3-D printed vocal tract. By using the Vocal Tract Organ, which provides a user-controllable artificial larynx sound source, a vowel sound is synthesised which compares favourably with vowels of modern individuals.