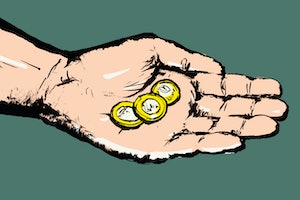 Forget everything you've read. Some millennials are, in fact, saving for retirement, mostly through employer-provided plans, according to Pew. Millennials offered these plans, typically 401(k)s, actually have more in them than their older peers in Generation X.

A Transamerica survey of more than 5,000 workers, most of whom are millennials, found that 71 percent of the youngest respondents were already saving for retirement with a company-sponsored 401(k) or similar plan and/or outside the workplace. They started saving at the median age of 24—that's younger than previous generations—and contribute 10 percent of their annual salaries.

So how could we go about fixing this problem, especially as social security will provide less than a safety net as it has in the past?

A study performed by New York University associate professor of psychology Emily Balcetis found that young people simply think of retirement as something that’s very far away, like Mars. To bring things down to Earth, she emulated an experiment by Stanford social psychologist Hal Hershfield that showed participants what they’d look like once they were older. Hershfield found that those who saw their future selves wanted to set aside more money for retirement than those who didn’t. In Balcetis’ recreation, she showed participants their aged headshots and then asked if they’d start saving for retirement. They all replied yes.

We can’t all be shown our future selves this way, but imagination is perhaps the most powerful muscle that we don't use regularly. Envisioning your future self is a good exercise to start taking retirement seriously. Where does your future self live? How do they get to the supermarket?

Of course, our imaginations don't just drive our wildest successes. It can also bring out our deepest fears. If you scoffed a bit trying to imagine your future self just now, you're not alone. What if imagining the future has the opposite effect, where people decide it’s not worth the investment? Hershfield found that people who are pessimistic about the future tended to struggle to be able to save. Apparently, what snaps millennials out of this defeatist mindset is peer pressure. Bad for drugs, but good for saving.

“A good solution to help people save is to tell them what people in their income profile are doing, essentially asking, what’s wrong with you? Your peers are doing this, and you should do better,” Matt Fellowes, chief executive officer of United Income, told MarketWatch. “Of course, we wouldn’t use that wording.”

If the world seems overwhelming, these days, try to focus one thing that's in your control: your bank account. It could be like a working a muscle you never knew you had.

Another effective tactic? FOMO (fear of missing out). That is, if you’re going to have a future, even in a bleak world, it may as well be a good one.

Abstract: Many people fail to save what they need to for retirement (Munnell, Webb, and Golub-Sass 2009). Research on excessive discounting of the future suggests that removing the lure of immediate rewards by pre-committing to decisions, or elaborating the value of future rewards can both make decisions more future-oriented. In this article, we explore a third and complementary route, one that deals not with present and future rewards, but with present and future selves. In line with thinkers who have suggested that people may fail, through a lack of belief or imagination, to identify with their future selves (Parfit 1971; Schelling 1984), we propose that allowing people to interact with age-progressed renderings of themselves will cause them to allocate more resources toward the future. In four studies, participants interacted with realistic computer renderings of their future selves using immersive virtual reality hardware and interactive decision aids. In all cases, those who interacted with virtual future selves exhibited an increased tendency to accept later monetary rewards over immediate ones.