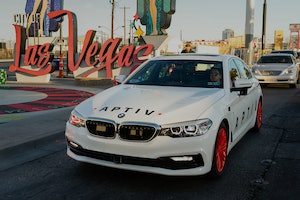 It's not a gamble

Nobody is quite sure if, or when, self-driving cars will become fully mainstream. But an experiment run by Lyft with the technology appears to have been an unadulterated success. The ride-hailing service partnered with an automotive technology company called Aptiv back in 2018 to offer self-driving car rides in Las Vegas, and the companies have just announced that they've now served 100,000 customers.

In a blog post, Aptiv President Karl Iagnemma writes that people were overwhelming satisfied with their experiences in the self-driving cars.

"Notably, 98% of these paying passengers have rated their Aptiv self-driving rides 5-out-of-5 stars, with most stating this first-of-a-kind experience is something they are eager to try again," Iagnemma writes. "Together with Lyft, we are proving real-world viability and building consumer adoption. Providing riders with the opportunity to see Aptiv’s autonomous driving technology safely and confidently navigate to their destination is a real 'aha' moment for them."

Iagnemma writes that customers would often ask how the car works or what the car is able to see. All of the rides were monitored in real-time at Aptiv’s "command center" to make sure everything was running smoothly. The companies are continuing to serve customers as we speak.

The self-driving cars they've been using are a modified BMW 5 series. As hard as it may be to believe, there have been no accidents since Aptiv and Lyft partnered up two years ago. Though the cars are driving themselves, all of these rides have had a driver in the front seat in case something goes wrong.

Lyft isn't the only company working on giving people rides in driverless vehicles. Uber is currently testing out self-driving cars in Pittsburgh, and the company is planning on doing tests in Dallas, San Francisco, Washington D.C. and Toronto. These tests will also involve having a human driver behind the wheel while the car does the driving, and Uber employees drive the self-driving car around manually for a period of time to collect data before testing how the car drives on its own. Even once the vehicles take control, the tests won't involve customers yet, so you'll have to wait on ordering a self-driving car from Uber.

Uber was testing out self-driving cars in Phoenix, Pittsburgh, San Francisco and Toronto until a car was involved in a crash that killed a pedestrian in the Phoenix area back in 2018. Uber paused the program and then scaled it back when that crash occurred. Documents released by the National Traffic Safety Board in November claim Uber did not have a "formal safety plan" in place when the crash occurred.

More like this
Gear
11 hours ago
Why Mercedes-Benz’s Self-Driving Milestone is a Big Deal for Autonomous Cars
By Jackson Chen
Innovation
Jan. 19, 2023
A robot choreographer reveals why M3GAN — and all robots — should dance
By Molly Glick
Gear
Jan. 19, 2023
How Uber's bus-like EVs could revive a transit pipe dream
By Ian Carlos Campbell
LEARN SOMETHING NEW EVERY DAY.
Related Tags
Share: