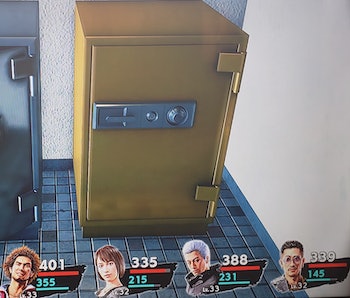 Being a criminal is all about getting that bread. Yakuza: Like a Dragon is the eighth mainline installment of Sega's cult-classic adventure series, and this time around you'll step into the shoes of a new protagonist in a big new city. There are plenty of hidden goodies to discover during Ichiban Kasuga's adventures in Yokohama, and those glimmering golden safes just might be the most enticing of all. So how do you crack them open and pilfer the goodies inside? You'll need a key for each one. Getting hold of those keys isn't too difficult, but the game doesn't spell it out all too clearly, either.

Instead of waiting to stumble across the secret yourself, here's how to acquire gold keys for your Yokohama treasure hunt.

There are three essential steps to getting gold keys:

The Yakuza games often include hidden black-market shops where you can purchase ultra-powerful gear, and Like a Dragon is no different. The two easiest ways to get Gold Safe Keys involve finding these hidden shops. To do so, you'll need to briefly change Kasuga's job.

Head to Hello Work in the Commercial District and speak to Ririka. You'll want to swap Kasuga to the Foreman job. (In order to unlock Foreman, Kasuga will need Charisma level 3 or above.) Once you select the Foreman job, exit out of the job swap menu. You'll see a pop-up indicating you've unlocked the ability to Demolish certain conspicuous locations to access hidden areas. Happily enough, Kasuga will be able to use this ability regardless of which job he currently has equipped. That means you can switch back immediately after seeing this pop-up if you've got better equipment and levels for another job.

Once that's done, here are three places to get gold safe keys in Like a Dragon.

3. Find the boarded-up shopfront near Hamako's "restaurant" in the Bar District

Grab a taxi or use your smartphone and head to either the Ichiban Confections or Can Quest drop-off point, both technically in Commercial District area of the map. Head down the isolated narrow street on the southwest corner of your map, and look for a boarded-up shop door with a red awning. Use the Demolish ability to access a hidden shop with a sweet little granny selling accessories that increase the EXP earned for a number of jobs, a couple items to help you cheat at gambling, and Gold Safe Keys at ¥10,000 each.

Head to the Seagull Cinema taxi stop in the Isezaki Road section of the map, then head to the small alley above the Zhou Long Distribution weapon shop. Ascend the stairs to your right, then walk through the small open square to see a shed to your right. Demoilish the door to find a bucket-hat wearing gent selling high-end accessories. At the bottom of his list of wares, you'll see Gold Safe Keys for sale at a price of ¥10,000.

Bonus shop! There's a third hidden merchant in Yokohama, though they do not sell gold keys. To find him, take a taxi to Survive Bar in the Bar District. Look for the restaurant called Bar Rodriguez on your map, then head to the north end of the block to find a set of stairs attached to Bar Hangover. Demolish the boards covering the door to your immediate right and talk to the guy in the face mask and bucket hat. He doesn't have much in the way of high-end weaponry, but is one of the few places you can buy consumable damage-dealing items like throwing knives and hand grenades, in addition to some low-end accessories.

1. Talk to the hiding man in Koreatown

If you're pinching pennies, this is the cheapest way to snag a key, but we haven't had the patience to try it more than once.

At any point in the story from Chapter 6 onward, head to Koreatown and find the block-spanning building that's home to Citron Mahjong and Professor Sujimon — Futokocho is the nearest taxi-drop off point. In the second-floor stairwell on the west side of the building, you'll see a man in a face mask sitting on the floor. You'll need to talk to him about 50 times — when you get to him responding with ellipses, you're in the home stretch. Eventually, he'll thank you for making him feel "warm and fuzzy" by showing so much interest in him, and reward you with a free Gold Safe Key.

Even better, there's a glimmering gold safe just down the hall from his hiding spot, near the eastern entrance to the building on the second floor. Yahtzee!

Yakuza: Like a Dragon is out now on Xbox, PS4, and PC.