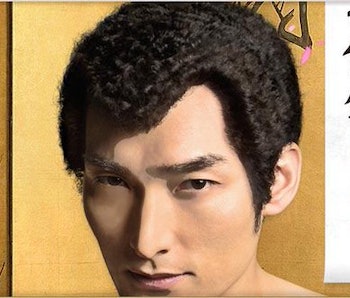 Image is everything. That's especially true for the slick-styled members of Japan's high-rolling organized crime syndicate known as the Yakuza.

In the early hours of Sega's latest installment of its crime-adventure video game series, Yakuza: Like a Dragon, protagonist Ichiban Kasuga is dead set on looking his fly best after he's sprung from a long prison sentence. Like any style-savvy nogoodink, he marches straight to the nearest hairdresser and asks for a punch perm. The befuddled stylist does what she can, but it doesn't turn out well. Throughout the rest of the game, Kasuga's wavy mop becomes his trademark, even if it's the occasional butt of a joke.

So what is a punch perm, and why were they so popular among this particular segment of Japanese society? And what can that tell us about Ichiban? Let's break it down.

Invented by the barber Shigemi Naganuma in the 1960s, the style was created using narrow hexagonal hair irons, a bit larger than pencils, to emulate the textures of Black hair. The angled irons allowed for a stronger hold than traditional round ones. Naganuma originally called the style the "champion press," though the nickname of "punch perm" proved to be more catchy. It's thought that this nickname derived from a particular variety of carpet that was popular in the '60's and '70s, known as needle-punch or berber, which has a short and tightly curled nap.

The look became quite popular in Japan, sported by popular Enka singers and trendy youngsters. The men's style blog Ape to Gentleman includes this gem of an anecdote from Osaka-based former national punch perm champion (!!!) Takashi Kata, reflecting on the style's massive popularity in the '60s and '70s.

“Punch perms used to be so popular guys would line up for hours to get one done. At the peak of their popularity, I was making up to 2.4 million yen a month just doing punch perms.”

Over time, the style became more strongly associated with tough guys — the yakuza, construction workers, and biker gangs known as bosozoku (which quite awesomely translates to "out-of-control tribe"). That made the look less socially acceptable, as punch perms had essentially evolved into a signifier of a troublemaker. The trope carries through in Japan's pop culture today, and you've likely come across some characters in TV shows, games, and anime sporting this style.

Remember that earworm from a couple years back, "Pen Pen Pineapple Pen"? Piko-Taro, the flashy musician character created by comedian Kosaka Daimaou, sports a punch perm in the song's music video, embedded above.

English-language Japanese news site Sora 24 likens the punch perm to both the mullet, or a Kid n' Play style hi-top fade, though it's not clear that there's a great Western analogy for this look. However, it's not easy to come by a stylist who can pull this look off today, even in Tokyo. This 2017 video from Sora 24 shows the process in action. You can practically smell the sizzle!

So what does all of this tell us about Ichiban Kasuga, the hero of Like a Dragon? It's the first obvious sign that he's a fish out of water. After some two decades in jail, he marvels at smartphones and lapses into fond memories of retro Dragon Quest games. The Tojo Clan — who he sacrificed everything for — now bows to their greatest enemy. From the red suit to the shock of wavy hair, everything about Ichiban sticks out in latter-day Yokohama like a sore thumb.

Turns out, that's also his greatest strength. Ichiban lives by the moral codes set out by old-school Yakuza and old-school video games. Even if it's easy for him to make enemies, he's able to make friends just as quickly. "Ichiban" translates to number one, first, or best. His botched punch perm underscores the fact that this lovable weirdo is truly one of a kind.

Yakuza: Like a Dragon is out now on Xbox, PS4, and PC.