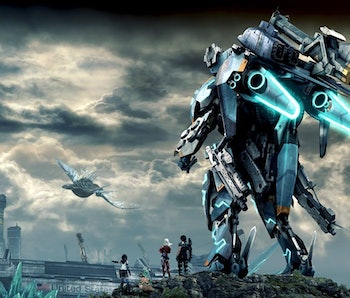 In Japan, an email sent to purchasers holds a message from Takashi. Here’s what it says, translated

“While it is a conclusion, that does not mean it is the end of the Xenoblade series. It is just a stopping point in my mind,” a translation by Nintendo Everything reads. “I think that everyone who played this title and the additional stories in the Expansion Pass can imagine what lies in the future for Xenoblade.”

Xenoblade Chronicles X occupies a strange spot in the series, technically the second game released by almost wholly unrelated to the rest. While the franchise has always had sci-fi elements, Xenoblade X jumps entirely into the sci-fi end of the pool. The story opens with Earth being destroyed in the middle of an alien onslaught, and the survivors escaping in a set of massive colony ships. One ship, the New Los Angeles, crashlands on an alien planet known as Mira, and it's up to the survivors to forge a new life and content with threats that want humanity extinct.

It’s a fascinating setup and despite having many of the same systems, Xenoblade X feels remarkably different from other games in the series. Unlike the other games, this time around you play as a silent protagonist, with a robust character creation system to boot. Most Xenoblade games put a huge focus on story, but Xenoblade X puts a much larger emphasis on gameplay, mechanics, and exploration.

Mira is by far the most vibrant world Monolith has created, filled to the brim with wildlife and diverse biomes to discover. There’s also more of a sense of purpose to exploration, as everything is in service to expanding and improving your home base of New Los Angeles. Of course, the major feature of Xenoblade X is massive mechs known as Skells, which actually become a gameplay mechanic roughly a third through the game. Skells not only change combat and factor into the story but also become all-terrain vehicles that add an extra wrinkle to exploring Mira. It’s a phenomenal mechanic that the series simply hasn’t matched the same way since.

Now that Xenoblade Chronicles 3 has brought an “end” to that narrative, it presents the perfect opportunity for Monolith to create another exploration and mechanics-driven entry. This is the perfect chance to start with a fresh slate and really go off the deep end with a new idea, some game-defining mechanic like the Skells.

Considering Monolith was a key developer on Breath of the Wild, it’d be fascinating to see the studio take another stab at redefining the open-world genre. Maybe this is the perfect time to tone back some of the traditional JRPG systems and strive for a more interesting and involved world. Xenoblade X achieved remarkable results on the Wii U’s hardware, and Monolith is easily one of the most talented developers under Nintendo’s belt.

Unfortunately, any new Xenoblade game is likely multiple years out, considering Monolith is assisting in the development of Breath of the Wild 2. However, that also presents the perfect chance to finally bring Xenoblade X to Nintendo Switch, considering it’s currently the only Xenoblade game not on the platforms.

It’s truly a shame that the only way to experience Xenoblade X is with a Wii U, and that’s about to become even harder when the eShop closes in 2023. A port of Xenoblade X can serve as a stop-gap, while Monolith works on an ambitious new game, and ensure that one of the studio’s most unique titles lives on. No matter what happens, though, Monolith’s next game should put the focus squarely on exploration and a dynamic world.