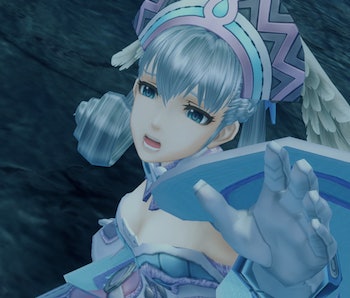 The characters in this game are each a memorable reflection of how war has impacted every culture in this strange world. The original Xenoblade Chronicles proved that characters can make or break a JRPG, and to revisit this entertaining cast with a fresh coat of paint makes for one of this summer's must-buy games.

On the surface, the game is set on two now-dormant titans who once fought each other, so that's already an original and intriguing set-up, but the characters that populate it make the game even more interesting.

The people of Bionis (the titan-planet that players start out on) are stuck in a perpetual war with the Mechon from the other giant, Mechonis, and that conflict reaches a peak during the events of the game. Of course, there's more than meets the eye there, and the story eventually escalates to near world-ending stakes like most JRPGs. Thankfully, the story always feels relatable and grounded thanks to its characters, namely the ones that make up your party.

Shulk, the most well-known Xenoblade character thanks to Super Smash Bros., initially seems like an archetypal generic and naive orphan, but we see Shulk grow more confident in himself over time as he confronts his own trauma. His goofy but loyal best friend Reyn is an effective foil to the oftentimes serious Shulk, and their pairing produces some meme-worthy lines like, "It's Reyn time!"

The other characters in Xenoblade Chronicles: Definitive Edition all provide interesting perspectives on the world as well. The sniper Sharla gives us a look at how the war affects people outside of Shulk's home colony. Meanwhile, Dunban is a badass master swordsman who tries to look after Shulk as he ventures out onto Bionis and Mechonis for the first time.

Melia, a royal from the humanoid High Entia race, provides a perspective from a more mythologically intertwined people of Bionis. Riki is a goofy creature from the rounded Nopon race that's trying to prove his worth by traveling with Shulk and co.

All of these party members, in addition to the seventh one that I won't spoil here, are well-written with incredible voice actors performing their lines, which makes the world and the stakes of the game feel all the more palpable.

Xenoblade Chronicles: Definitive Edition seems to make a lot of visual and gameplay improvements to the game, which has aged poorly in those areas, but the real reason I'll return to the game soon is that I want to experience its story and see its characters once again. Definitive Edition is aware of that too, because it not only features accessibility option to make the game easier, according to Famitsu, it is also packing in Future Connected a brand new story that serves as an epilogue to the game.

Xenoblade Chronicles: Definitive Edition will be released for Nintendo Switch on May 29, 2020