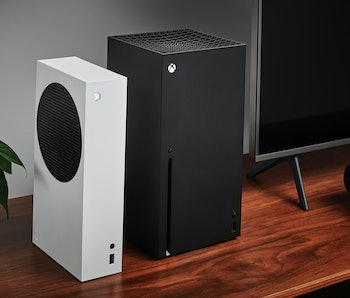 If you want to get an Xbox Series X or Xbox Series S this month, this is where you need to look.

Now that we’re halfway through March, we’ve already seen quite a few restocks for next-generation consoles happen at several retailers. Still, consoles like the Xbox Series X and digital-only Xbox Series S are still hard to come by even as fans rush to get them before the launches of Psychonauts 2 and Halo Infinite.

While semiconductor shortages are expected to continue, leading to potential slow-downs in production, more systems will probably be listed this week. Keep an eye on the following retailers and restock resources.

It’s been a few weeks since Best Buy had Xbox Series X consoles in stock. Last week, it listed new PS5s but no new Xbox consoles. Hopefully, this means a restock for Microsoft’s next-gen consoles is imminent, though nothing has been confirmed just yet.

You’ll want to follow Best Buy’s Twitter account as it could announce the restock beforehand. Obviously, also make sure you are monitoring the retailer's online store pages for Xbox Series X and Xbox Series S as well.

Target restocked the Xbox Series X and its digital-only counterpart just last week on March 11, so we don’t know for sure it’ll happen again this week. If it does happen though, you’ll want to keep an eye on its Xbox Series X and Xbox Series S store pages for online stock and PopFindr for in-store stock.

While there’s no news on a major restock for this week just yet, Xbox Series X and Xbox Series S consoles were restocked at GameStop last week. As the biggest video game retailer, we expect that GameStop will have more at some point this month.

As such, it’s a good idea to pay attention to the retailer’s Xbox Series X and Xbox Series S pages online. Following them on Twitter is also a good idea s they may announce the restock beforehand.

One of the most reliable retailers you can order a next-gen Xbox console from is the Microsoft Store, and there was stock as recently as March 9. While it doesn’t restock as often as the other retailers, you will be buying straight from the manufacturer themselves with this, so your order is less likely to get canceled. Because of that, you should always be on the lookout on their dedicated pages for both next-gen consoles.

Amazon will sporadically restock next-gen consoles, so it can be hard to track an exact time and date for when they’ll happen. Still, if you monitor their Xbox Series X and Xbox Series S store pages and use the resources below, you might still be able to snag a console once they go live.

There are several online resources you can use if you want to make getting a next-gen console a bit easier. For online buyers, OctoShop is a helpful tool to set notifications at your preferred retailer. Meanwhile, PopFindr can help you track stock in stores. Finally, if you just want to know when the stock goes live, we recommend following and setting notifications for Twitter accounts like @Wario64, @Spieltimes, and @XboxStockAlerts.