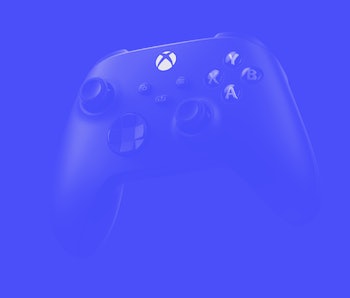 On Monday morning, Microsoft revealed a heap of new details about its upcoming next-gen console, the Xbox Series X. The new hardware is all about performance, with impressive 4K visuals and more teraflops than you can shake a stick at. However, one of the gamesmaker's most thoughtful innovations might not be obvious at first glance. Similar to Sony's DualShock 5, the new Xbox controller looks an awful lot like its predecessor at first glance. Look closer, though, and you'll see it's been subtly tweaked to suit more players.

The most notable change to the Series X controller is the size. It's smaller than its beefy Xbox counterpart. In an interview with Xbox Wire, Senior Designer Ryan Whitaker said,

"By accommodating hands similar to those of an average 8-year-old, we found we could improve accessibility and comfort for hundreds of millions more people without negatively affecting the experience for those with larger hands. We did that by rounding the bumpers, slightly reducing and rounding parts around the triggers, and carefully sculpting the grips."

Xbox head Phil Spencer has spoken candidly in recent months about the need for Series X to appeal to a broader swath of gamers. Presumably, this includes younger players, women, and Japanese gamers, all of whom stand to benefit from a smaller form factor. Microsoft hasn't done the best job of appealing to these audiences in recent years, with a lineup of games that tends to heavily favor first-person shooters and sports titles. The stellar market performance of the Nintendo Switch, which actively courts a broad audience of gamers worldwide, has left Xbox trailing in third place in the current console generation. That's no mean feat on Nintendo's part, considering Microsoft had a three-and-a-half-year headstart.

Whitaker suggests that these concerns were foundational in the Series X controller's design. "Being more inclusive is part of the design process from the very beginning," he told Xbox Wire. "By listening to gamers and observing how people of all backgrounds and abilities play, we continue to learn more and find areas we can improve."

Back in February, Spencer said that one of his chief goals with the new console was to make Xbox "mean more than it does today" in Japan. As of 2019, fewer than one percent of the total Xbox One consoles sold globally were sold in Japan. That seems to be changing, with more titles from Sega and Square Enix – like the Yakuza and Final Fantasy series – recently getting ported to Xbox One. Spencer has also emphasized that more Japanese games, like From Software’s Elden Ring and Sega’s Phantasy Star Online 2, will be playable on Xbox platforms in the future.

Whitaker's comments suggest that the tweaks to the Series X controller aren't just about making the hardware appeal to the kinds of gamers Microsoft has tended to leave by the wayside: the enhancements also bear its core audience in mind. Series X controllers will include a tweaked D-pad to better accommodate a variety of playstyles. It's more of an angled dish than a cross shape.

Building on what we learned from Elite and watching how people use the D-pad, we designed a hybrid to deliver the best of both. It feels great. The slightly deeper dish gives your thumb a nice little “home” to sit in. The angles are finely tuned to give you a good amount of leverage with minimal movement. Gamers will notice a performance boost right out of the box.

Cross-functionality is also a major emphasis of the new design. It'll be charged via readily accessible USB-C cables, and compatible with xCloud on iOS and Android, PC, and Xbox One. It will incorporate a new Bluetooth standard, Bluetooth Low Energy (BTLE), to make device pairing easier. Unlike the Sony's new DualShock 5, it won't have haptic feedback or a rumored touchscreen, which probably bodes well for battery life.

Microsoft has already been a leader in making gaming accessible for people with mobility limitations, particularly with its adaptive controller. Now, it's integrating some of the key takeaways from that endeavor, and its lackluster market position, to appeal to more gamers. Xbox controllers are already widely used by PC gamers, and it's likely this will continue after the Series X launches. While Sony is touting the haptic feedback of the new DualShock, we'll have to get our hands on it to be truly convinced. At this point, it seems like Microsoft has the clear edge here, with a simpler, user-friendly design that eschews unnecessary battery-sucking components and cuts to the chase.