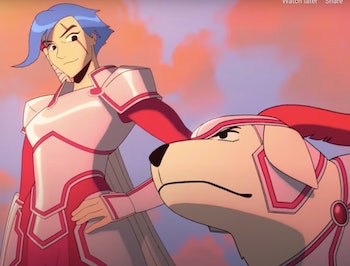 When Advance Wars debuted in the U.S. in 2001, you’d be forgiven if you didn't notice it on the shelf. It had no movie tie-in, no flashy IP. Just a generic title and a tank on the cover. It was like something you’d find at Aldi, familiar enough to make sense but without the name brand hyping up the price tag. Inside the box, though, was a flawless strategy game with enough depth, variety, and tactical challenges to keep your inner Patton satisfied.

It holds a special place in the hearts of many fans who found endless replay value in the multiplayer mode on Game Boy Advance, passing the system back and forth with friends or family members for hours on end. If Advance Wars was your shit, or if you’ve only heard effusive praise from wide-eyed friends bragging about their days of glory, there’s good news. A spiritual successor to Advance Wars exists, capturing the nostalgic retro aesthetic and delivering on white-knuckle tension with some of the toughest RTS combat found anywhere in any era. Even better, it’s free on Game Pass right now.

I’m talking about Wargroove. Developed by indie powerhouse Chucklefish, the publishers behind Stardew Valley, Wargroove takes players through an epic story about Mercia, a newly minted Queen of the Cherrystone Kingdom (her father was assassinated! Drama!) who is more take-charge commander than nimble diplomat. She sets out on a journey to navigate a world-spanning war and picks up allies along the way. What makes Mercia and her allies important is their special abilities, known as Grooves. These abilities charge up during battle and, when used properly, can snatch victory from the ever-present jaws of defeat.

Defeat is something you’ll need to get used to by the way. There’s no save scumming in Wargroove, and battles can take upwards of 20-30 turns to resolve. One false move and you’re starting all over again.

I said it was among the toughest RTS combat out there right now. I wasn’t kidding.

Brutal challenge aside, Wargroove is balanced and fair. You’ll manage a roster of units under a variety of factions that more or less serve the same functions, be it pikemen for defense or siege weapons for taking down forts and villages. Like Advance Wars, a big part of the tactics involve capturing territory to generate resources and spending them wisely.

If you’re familiar with the rock-paper-scissors strategy of the Fire Emblem series (swords beat spears, spears beat cavalry, cavalry beats swords, etc) then you already have a firm grasp on the fundamentals of combat here. It’s all about countering units, striking first, and maintaining formations that allows your troops to deliver critical hits as often as possible. For example, pikemen do critical hits when next to each other so you’ll want to keep them together. Cavalry do maximum damage if they move six squares to hit their target, so hang back. That kind of thing.

It’s easy to get overwhelmed at first but patience is key here. It is an absolute marathon of a game, you will spend hours getting through one battle. The default difficulty is no joke, but you are able to tweak settings to find a degree of difficulty that works for you by managing how much damage your units give and receive. It’s a nuanced solution and feels less like cheating the deeper into the campaign you go. It’s really hard (did I mention that?).

Beyond the campaign is a fantastic multiplayer ecosystem. You can play co-op or in head-to-head battles, and there’s a map editor that allows players to create and share custom campaigns. As of this writing there are 1,786 pages worth of custom content to browse on Xbox. Not too shabby for a game that’s already two years old. And it means there’s always plenty of opponents around for online matchups if you don’t have any friends left after being a dick about your Advance Wars skills.