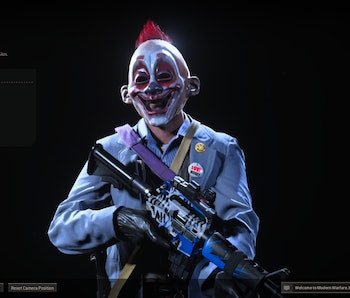 Why so serious? If you feel like the wide-open world of Verdansk can use a little chaos, you can be its agent in Call of Duty: Warzone.

A clown skin reminiscent of (but not exactly) the Joker from the 2008 masterpiece The Dark Knight is now available to purchase and download in the COD Store. If you and your buddies want to drop into Verdansk and raid the bunkers like it's Halloween in Gotham City, now's your chance.

What Happened? — On Monday, Call of Duty: Black Ops Cold War and Call of Duty: Warzone added a new downloadable bundle pack in the COD Store called "Big Joke." For the premium price of 2,000 CP ("COD Points"), the bundle gives players access to a Joker-esque clown skin for the Operator character Baker, plus other goodies like an M16 blueprint ("Fool Proof") and a Gallo SA12 shotgun blueprint ("The Punchline").

How to buy and download Big Joke — Downloading bundle packs in the COD Store is an extremely simple process. So long as you have a working, valid credit card attached to your Blizzard account, you should be able to buy any and all content bundles, including Big Joke.

With today (January 25) being Big Joke's big debut, you simply can't miss it in the COD store:

For the rest of the week, Big Joke should still be available in the "Featured" section of the COD Store. After one week, the pack will disappear, but fret not; the vast majority of all content bundles reappear on a rotating basis. If you miss out on buying Big Joke this week, it'll come around again before you know it.

Why is Big Joke so cool? — Well, who doesn't want to be a murderous clown in a popular battle royale shooter?

But arguably the main reason why fans are excited for the Big Joke bundle is its strong evocation of Batman's famed nemesis, the Joker. The Operator skin looks uncannily like the Joker's minions in the opening bank heist of The Dark Knight.

The skin also includes some Easter eggs that really sell what it's trying to be: A political button that reads "I LOVE MONEY" (a satire on The Dark Knight, which had Harvey Dent's campaign for Gotham D.A. and the Joker burn a huge pile of money); a generic smiley face that could be a reference to the DC graphic novel Watchmen; and an unmistakable purple trench-coat and a striped blue button-down shirt.

By all measures, "Big Joke" is the closest Warzone players can be "The Joker," and it's just off-brand enough getting into legal trouble with DC Comics owners WarnerMedia.

The Inverse Analysis — Call of Duty: Warzone isn't a stranger to unofficial crossovers. There have been plenty of other "off-brand" content packs in Call of Duty: Modern Warfare, Warzone, and now Black Ops Cold War that are evocative of pop culture but aren't actually based on existing IP. Elsewhere on the COD Store right now is the "Disavowed Assassin" bundle featuring a Kill Bill-style skin for Portnova. For Modern Warfare, there have been bundles inspired by movies like Alien, Akira, Sicario, District 9, and Commando.

Last Halloween, Call of Duty began testing the waters with official crossovers. During the "Haunting of Verdansk" special event, the game sold bundles based on the horror franchises Saw and Texas Chain Saw Massacre, with content inspired by the central icons of both.