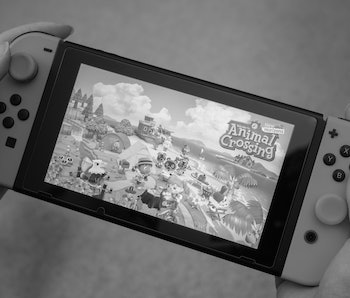 The same week social distancing measures were announced in Australia (March 16 – March 22), sales of game consoles leaped 285.6 percent. Prior to this, sales were declining month on month.

We’ve also seen a 278.5 percent spike in physical game sales, spurred by the release of Doom Eternal and Animal Crossing: New Horizons. Covid-19 is clearly having an impact on our shopping habits beyond toilet paper.

Looking at the games leaping up the UK charts in late March, the top five (which all enjoyed a 200%+ bump in sales) provide robust multiplayer experiences. Apart from Doom and Animal Crossing, we see the latest releases from Call of Duty, FIFA, and Mario Kart. These games aren’t simply about escaping reality, but about going somewhere together.

Yet, to those who aren’t already avid players, video games might be viewed as a juvenile – a waste of time lacking redemptive qualities. In the era of the quantified self, where we’re pushed to use technology to track and “optimize” ourselves endlessly, even those who do enjoy games may feel guilty for not being more “productive”.

On the contrary, we have found video games help satisfy fundamental psychological needs, and therefore have enormous value for all ages.

According to Self-Determination Theory, people have three psychological needs:

The satisfaction of these basic psychological needs leads to greater well-being and motivation. If being stuck at home is reducing your happiness and well-being, this could be due to reduced satisfaction of one or more of these needs. For instance, your sense of autonomy may be undermined when forced to self-isolate, as you can’t partake in many of your usual activities.

Your sense of competence might have also taken a hit, by missing out on the daily “wins” that can come through leisure pursuits or problem-solving at work. You also likely can’t see your colleagues, neighbors, friends, and family as often, which can undermine feelings of relatedness.

Fortunately, many of us have found other ways of satisfying these needs through technology, such as using webcams and microphones to have online interactions. It’s not the same as a face-to-face meeting, but it helps maintain connection and satisfies our desire for relatedness.

Video games can also satisfy these needs and maybe a great way to spend some time during this crisis.

Research shows games help facilitate a sense of autonomy by giving players freedom of choice and, depending on the game, a meaningful narrative for completing tasks. Well-designed games also facilitate a feeling of competence by presenting challenges that aren’t too hard or too easy and feel rewarding to overcome.

They offer a clearly defined “sense of progress and achievability”, as Jennifer Scheurle explains. This is especially valuable during lockdown when your days may feel monotonous.

Games also offer a sense of relatedness. This could be through playing with friends or even connecting with a stranger online (with whom you may be battling a common enemy).

Humans are hardwired for connection. Plenty of literature has established a link between loneliness and early death, and increased risk of disease for older people.

Research suggests gamers can also feel a sense of relatedness with virtual characters and the game world itself, adding to the overall enjoyment of playing. Caring about a character and their plight (relatedness) motivates players to help them (autonomy), and enhances their sense of competence when they succeed.

All good things in moderation

While playing games is psychologically valuable, it’s important to do so in moderation. The Child Mind Institute recommends about one to two (maximum) hours per day of gaming for children. For kids older than six, they encourage parents to “determine the appropriate amount of time”.

While there is no universal consensus on how much gaming is “too much” for adults, the answer is likely less to do with hours of play, and more to do with being aware of one’s susceptibility to video game addiction. That said, research suggests only about 1-3% of gamers are at risk of addiction. If you are concerned, you can try this test that was trialed in a paper published by the International Journal of Health and Addiction.

Eating healthy, minimizing alcohol consumption, exercising, and getting about seven to nine hours of sleep is also important for maintaining physical and mental health.

In the virtual world, do virtually anything

If life in lockdown is creating a sense of ennui for you, consider playing video games to keep your basic psychological needs satisfied. If you’re already playing, keep doing it (in moderation) without feeling guilty.

And if you see yourself as “not much of a gamer”, still consider giving it a try. The range of digital games is enormously broad, and there are many online guides for beginners wanting to get in on the action.

Whether you enjoy chess, want to explore the ocean, or live the island life while working for a Japanese raccoon dog – there’s something out there for you.

This article was originally published on The Conversation by Brad Elphinstone and Steven Conway at The Swinburne University of Technology. Read the original article here.