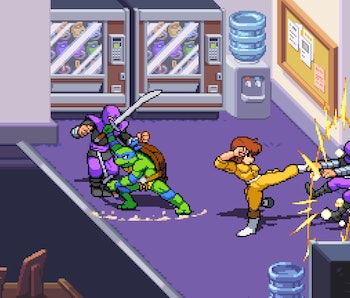 The Turtles are back, baby. TMNT: Shredder’s Revenge is a modern take on the side-scrolling beat ‘em up genre, following in the footsteps of the 1991 arcade classic Turtles in Time. In this new installment, developer Tribute Games took all the best aspects from the older games, and implemented a slew of modern touches that make it fun to play in 2022.

During PAX East 2022, publisher DotEmu and Tribute Games invited Inverse to try a preview build of Shredder’s Revenge, and it was an absolute treat. This nostalgic adventure will scratch a specific itch for a lot of players, offering plenty of callbacks to the arcade games from the ‘90s.

More often than not, our memories of older games make them out to be much better than they actually were. Sometimes, those familiar mechanics and features simply don’t hold up. With TMNT: Shredder’s Revenge, Tribute Games is aiming to make an experience that feels like the older beat ‘em ups, without all the technical limitations from the past.

The clearest examples of this are the game’s art and animation, which look absolutely stunning. Sure, it retains the beloved pixel art style from 30 years ago, but is much more vibrant, with a greater variety of assets on screen at any given time. Things like busy streets full of cars, cracks in walls, and even reflections in windows are little details that might seem insignificant but work together to evoke a more polished look. This is clearly depicted with the wide color palette, featuring plenty of variation that makes everything on the screen pop.

Beyond that are the gorgeous animations, which are exceptionally created, with a fluid approach that blows the classics out of the water. You’ll notice this in the jumping attacks, as well as during simple walking animations. The best example of art and animation working together is during the boss battles, especially when you stun your opponent, causing stars to float around their head. The vibrant colors and movement are just so well executed during these segments, making Shredder’s Revenge a showcase for some of the best pixel art we’ve seen.

You want a pizza me?

But what about the gameplay? Thankfully, the visuals aren’t the only thing that have received plenty of love. Even within our short demo with Shredder’s Revenge, we were able to enjoy some of the new gameplay features that alleviate the frustrations from the past.

For instance, health items—which, naturally come in the form of pizza—now drop for each player, meaning there’s no need to fight over who gets to heal this time around. Another welcome addition is the ability to walk over to a downed teammate to revive them, eliminating the need to wait for the lengthy timer to count down. Though, if you can’t make it to them, your allies will revive after 10 seconds or so. Once again, these seemingly small features add up to make Shredder’s Revenge a joy to play.

Much like the originals, Shredder’s Revenge features a simple control scheme, allowing a wide variety of players to enjoy it. Tribute Games wants kids and inexperienced gamers—along with beat ‘em up experts—to still be able to pick up and play without the need to learn complicated combos. That doesn’t mean the game feels too repetitive, though, as there are plenty of moves to unlock and learn as you play. For instance, the Story Mode features mild progression, rewarding you with more powerful attacks like Leonardo’s ridiculous tornado flurry that has a wide spread. Shredder’s Revenge incorporates just enough progression to give you something to work towards, without feeling overcomplicated.

Better with a friend

In Shredder’s Revenge, you won’t have to take on the bad guys alone. With up to four-player co-op online or locally, all four Turtles can team up to fight crime and eat pizza. According to Tribute Games CEO Jean-Francois Major, you’ll even be able to play locally and online simultaneously, giving you plenty of freedom to enjoy the game with your friends. For example, you and a friend can play together on the couch alongside two other Turtles online. This multiplayer component is not terribly common in games like these, but is a welcome addition.

Another excellent component is the game’s co-op progression system. A player who joins a host's game will still make progress towards their own save, which is a nice touch. For instance, if you’ve started a brand new game and join a player who’s on the fifth stage, you’ll still earn credit for completing that level (though you’ll still need to make progress during stages one through five). This is yet another example of building upon the classics in a meaningful way.

Finally, Major tells Inverse that some sort of crossplay functionality will be added, but that the team will “share more details closer to release.” It’s likely there will be crossplay within the same family such as PS4 and PS5, but it’s unclear if it will expand beyond that.