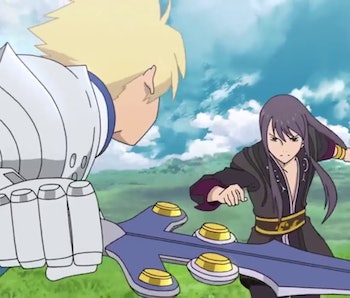 Long before Xbox vs Sony, or even Sega vs Nintendo, there was the rivalry of East vs West. Western empires and cultures sought trade and influence with their Eastern counterparts, leading to all sorts of spicy historical events like genocides and slavery and also, somehow, the five-second rule.

Microsoft was certainly punching above its weight by trying to go thumbtack-to-thumbstick with legendary Japanese heavyweights Sony and Nintendo. Sure, the Seattle-based giant did well in the U.S., but it wanted more (value for shareholders). The Japanese market held enormous potential. Millions of enthusiastic gamers who spent billions each year on Microsoft’s rivals. But how could Microsoft get their attention away from Sony’s impeccable PlayStation library? What could it do that Nintendon’t? What if they released a console exclusive? Not a new IP but something from a beloved franchise. Could they pull it off?

Tales of Vesperia is the tenth(!) entry in the series from developer Bandai Namco and was originally released as a 360 exclusive in the U.S. and Japan in 2008. A definitive edition, including remastered graphics and content once exclusive to Japan, dropped in 2018. That version is now available on Game Pass, but won’t be much longer. Tales of Vesperia is scheduled to leave the service on Oct. 16, presumably because a new installment in the series, Tales of Arise, is now available. So why should you play this ASAP?

The series is wildly popular for a reason. On the surface, the aesthetics are picture-perfect JRPG design (particularly in the remaster). Lovable characters like Yuri and Repede, his pipe-smoking dog, pop onscreen and wonderful voice acting propels a deep (maybe too deep) and engaging story. High drama, humor, rivalries, it’s all here.

Fans of the series also love it’s unique combat system. Most JRPGs have a standard turn-based mechanic, but Tales of Vesperia uses an “Evolved Flex-Range Linear Motion Battle System.” Say what? It’s actually pretty simple. Instead of turn-based attacks players are plopped into a battle and can free run around enemies and button mash different attacks. The complexity lies in how you combine certain attacks and time them to form long chains of attacks from you and your AI-controlled companions.

This works both ways, and the lack of a parry skill (and a not great block skill) means its possible to get ganged up on too. Spell casters are at a bit of a disadvantage since their attacks use longer animations which are more easily interrupted, but most players are able to navigate these bumps and figure out a playstyle that works. You can really get into the weeds with your equipment and the skills offered by different weapons, too. If you’re typically put off by the pace of combat in these games then you’ll really enjoy this system. It’s fast and/or furious.

Tales of Vesperia is a meaty game with a 50ish hour story campaign and another 10-20 hrs found in deeper exploration. It did find some success in Japan for Microsoft but was largely overlooked by American audiences since, if you were into JRPG style games, you probably spent most of your time on PlayStation. That makes it a nice hidden gem among the Game Pass library that will, unfortunately, be gone quite soon. All the more reason to play it ASAP.

Tales of Vesperia: Definitive Edition is available on Game Pass and for sale on PlayStation, Switch and PC.