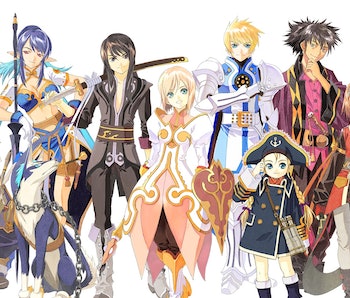 The Tales series has always had a habit of subverting JRPG tropes, but no game manages to achieve that in the same way as Tales of Vesperia. Featuring one of the best ensemble casts in the history of the genre, Tales of Vesperia is a grand adventure that has an incredibly ambitious narrative that tackles themes of belief and justice. First released exclusively on Xbox 360 in 2008, the remastered and expanded Tales of Vesperia Definitive Edition is now 80 percent off on the Nintendo Switch digital storefront.

At first glance, Tales of Vesperia looks like your typical anime JRPG with characters that fill archetypal roles like the brooding hero, gruff old man, and flirtatious woman. As you progress through the narrative, however, it quickly becomes clear that there’s much more depth to these characters, especially in terms of how they fit into the overall world.

Tales of Vesperia takes place in a world called Terca Lumireis, where people use mystical machines called Blastia for nearly everything. Blastia are used in combat but also take care of daily tasks like running water and powering machines. There’s plenty of lore and varying factions to dive into, but the real heart of Tales of Vesperia lies in its main party. The story focuses on a former imperial knight named Yuri Lowell, who gets embroiled in a plot when he goes to retrieve his neighborhood’s stolen Blastia core.

Yuri is easily the most fascinating part of Tales of Vesperia, as he’s a far cry from your typical JRPG hero, and is presented as more of a middle-aged anti-hero than an idealistic teenager. Becoming disillusioned with the way the Empire functions Yuri left the knights, and early on in the game, he decides to take “justice” into his own hands.

He’s not afraid to use violence, and even murder, in order to see true justice followed through. There’s no “come to the light” moment for Yuri, even though his character goes through a lot of growth. He sticks to his ideals no matter what but comes to respect the differing ideals of others. Yuri is a massive breath of fresh air for a JRPG hero.

Even though Yuri has the most complex character arc, each of the main party members gets their own time to shine. Estelle is torn between her duty as a princess and her wish to live her own life, Raven struggles with completing a duty he doesn’t morally agree with, and Rita has to break out of her shell and learn to lean on others. The main story is absolutely a slow burn, but the charm of the main cast manages to keep things chugging along.

Of course, all of this hasn’t even mentioned the gameplay of Tales of Vesperia, which is where the franchise really started to find its footing with the 3D titles. Vesperia’s combat system is one of the best Tales has seen, with a real focus on linking together ground and aerial combos. The combat is easy to pick up but Tales of Vesperia really ramps up the challenge in boss battles, most of which even have optional objectives you can complete for various rewards.

Tales of Vesperia’s combat simply feels good to play, and it’s a lot more responsive and tactile than what was found in Tales of the Abyss. Outside combat, there are plenty of secrets and side quests tucked away in the world of Terca Lumeiris, including a massive post-game dungeon that’s extremely challenging. The Definitive Edition of the game also brings hours of content the previous North American version never had, including new story sequences and a brand new party member.

The Tales series has achieved a lot since the release of Tales of Vesperia, but all these years later is still stands tall as one of the most interesting and complex experiences Bandai Namco has ever made. The key elements of a great JRPG are all there, but if you’re looking for a rich world with even richer characters, Tales of Vesperia is sure to be right up your alley.

Tales of Vesperia Definitive Edition is available to purchase on PlayStation, Xbox, Switch, and PC.