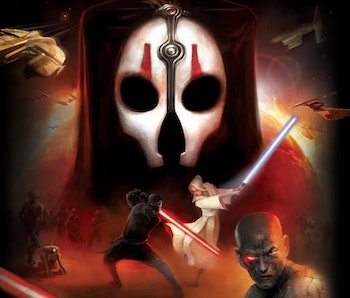 Even in the hallowed halls of Star Wars games, Knights of the Old Republic II: The Sith Lords stands out as one of the very best. A sequel to BioWare’s 2003 role-playing epic, KOTOR 2 was developed by Obsidian Entertainment, the studio now responsible for hits like Fallout: New Vegas and The Outer Worlds. What’s most surprising about KOTOR 2 is that it was released only one year after the original game, meaning it had a severely condensed development cycle. Despite that, the game became a cult classic, although it’s notorious for feeling “unfinished.” The trailer for the recently-announced Nintendo Switch port of the game held an extra surprise, with a “Restored Content DLC” coming soon. Details are still a bit scarce, but it’s the perfect time to dive into what happened with KOTOR 2 and what this upcoming DLC could mean.

Was Knights of the Old Republic 2 released unfinished?

The only way KOTOR 2 could release one year after the original was by re-using a wealth of assets from BioWare’s last game. It’s easy to see how it might feel like a glorified expansion pack, but KOTOR 2 really did make a variety of improvements in terms of both gameplay and story. To this day it’s one of the only pieces of Star Wars media that explores the moral grey between the light and dark sides of the force. Despite what it does well, KOTOR 2 was notorious for feeling unfinished, with an ending that felt abrupt and that it almost negated choices you’d made across the experience.

Obsidian was founded by ex-members of Black Isle Studios, the developer behind the original Fallout games. Among the founders was Chris Avelone, who’d work as lead designer on Obsidian's very first project, KOTOR 2. In a 2013 interview with Eurogamer, Avelone said Obsidian was given roughly 14 months from start to finish for KOTOR 2. “There would have been substantial penalties had we not have made that date,” said Avelone.

Apparently, part of the problem according to Avelone was that Obsidian was simply too ambitious> "There's a number of design decisions we could have done to de-scope the game. We should have removed all mini-games - that was a huge waste of time. And all those cut-scenes we had, the in-engine sequences: all of those were such a huge pain in the arse to set up and we could never count on them reliably,” says Avelone.

All of this resulted in some major cuts to KOTOR 2, particularly near the end of the game. It’s more amazing that Obsidian managed to put out such a stellar game in that short of time, especially since it was the studio’s first project. So that’s the long answer to if KOTOR 2 was unfinished, but it begs the question, what exactly was cut? That answer is a little more complex.

In 2015 a group of fans started work on “The Sith Lords Restored Content” mod, aiming to bring cut content back into KOTOR 2. This included piecing together dialogue found in the game’s code, and trying to restore the proper ending. The official post on Deadly Stream has a massive list of all the changes, which have only grown over the years.

At the same time, Aspyr’s website has a page for a “Restored Content Mod,” for the Mac App Store version of KOTOR 2. The page says it “includes new scenes, dialog options, a tweaked ending, and some minor bug fixes.” While Aspyr hasn’t confirmed anything, it’s unlikely the company would refer to the restored content as a “mod” unless they somehow integrated the work that fans have done. It’s certainly possible Obsidian has provided even more content or assets, but at the moment it certainly looks like the fan mod is being officially integrated. How and when that DLC will be released on consoles like Nintendo Switch, remains to be seen. Inverse has reached out to Aspyr Media for comment and we’ll update this story accordingly.