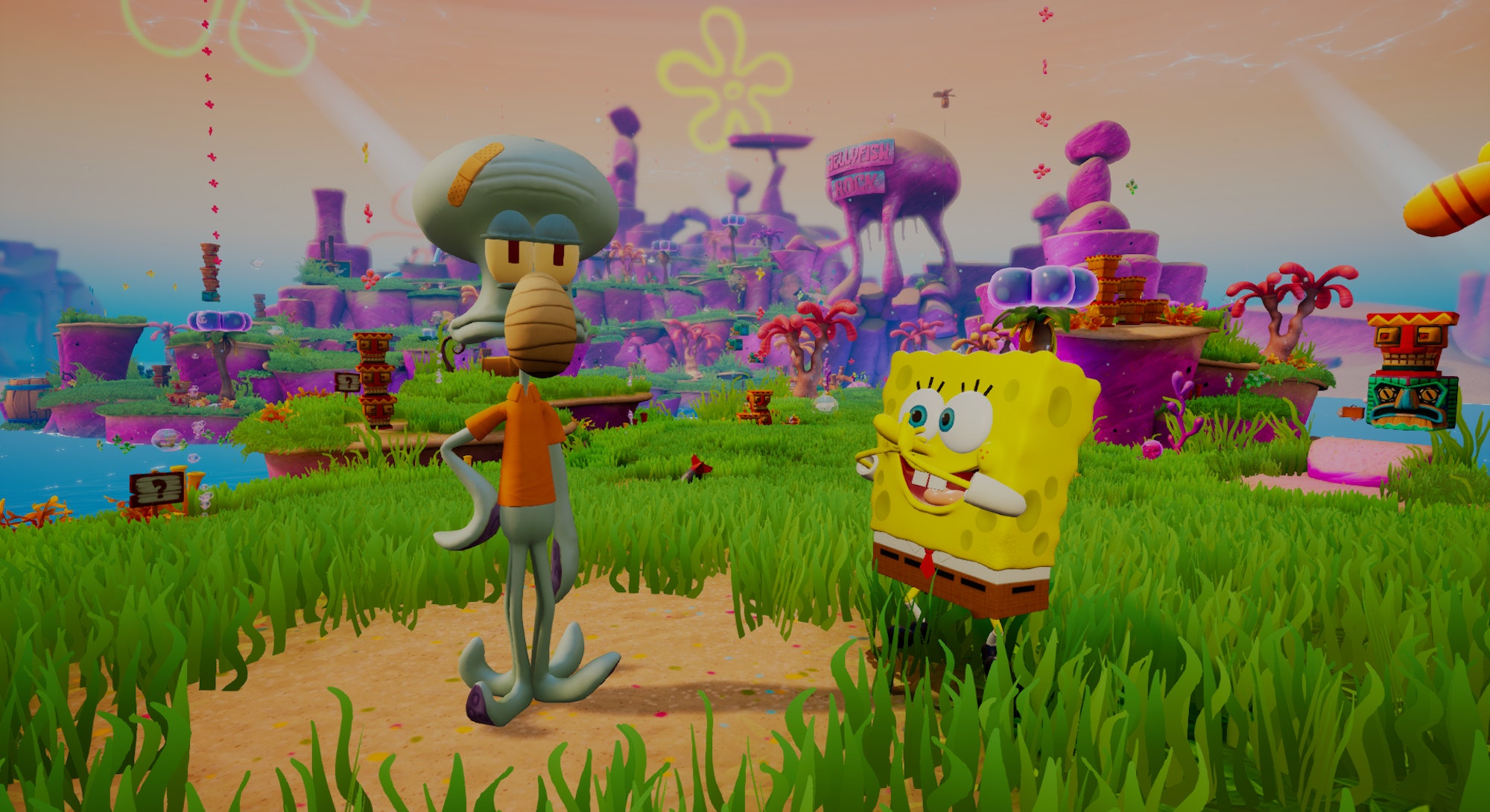 Most licensed games are terrible, but SpongeBob SquarePants: Battle for Bikini Bottom was a rare exception.

Many of my earliest gaming experiences, as someone who grew up in the 2000s, were with licensed titles based on movies and television shows rather than the uber-popular Halo: Combat Evolved or Jak & Daxter. One of the best-licensed games I played as a kid was SpongeBob SquarePants: Battle for Bikini Bottom, a game I fondly remember as bringing the world of SpongeBob to life while still being a fun platformer.

SpongeBob SquarePants: Battle for Bikini Bottom - Rehydrated, a remake by Purple Lamp and THQ Nordic struck me as a thrilling prospect, but the remake’s reception at launch swung from mixed to overtly negative. This worried me. Did THQ Nordic botch a childhood favorite, or was the game just not as good as I remembered?

After finally getting my hands on the game come launch day, courtesy of a F.U.N. Collector’s Edition of the game sent to Inverse by THQ Nordic, I was relieved to find that Spongebob SquarePants: Battle for Bikini Bottom - Rehydrated provided a nostalgia-fueled recreation of a game I hold near and dear to my heart, with that feeling only breaking with a few technical problems and a tacked-on multiplayer mode.

What makes the original Battle for Bikini Bottom so great?

Watching trailers for the games may leave you wondering what all the fuss is about. While it may have still paled in comparison to industry greats, within the licensed game scene it was a golden egg.

Instead of playing it safe, Battle for Bikini Bottom went the Banjo-Kazooie route, creating a collectathon with wide-open levels with nook and crannies to explore. It even took a page out of Donkey Kong 64’s book with SpongeBob, Patrick, and Sandy all being unique playable characters with different abilities. It was even ahead of the competition in some cases because it didn’t boot players out of a level after collecting a Golden Spatula, this game’s version of Stars from Mario.

For many players, this was a first introduction to the collectathon genre. Even better, it intricately recreated iconic locations from the amazing early seasons of SpongeBob SquarePants, like downtown Bikini Bottom, Jellyfish Fields, and Kelp Forest. Fleshing out worlds like this goes a long way for licensed games, with Ubisoft’s South Park: The Stick of Truth being another outstanding example.

Battle for Bikini Bottom may not have been the best collectathon out there, but you could tell its developers loved both the SpongeBob IP and collectathon genre and created a secret formula no SpongeBob game captured before or after. As such, it only made sense that Battle for Bikini Bottom was the first game THQ Nordic decided to revisit after striking a deal with Nickelodeon in early 2018.

How does Rehydrated capture that nostalgia?

In 2020, SpongeBob SquarePants: Battle for Bikini Bottom - Rehydrated may feel extremely odd to newcomers. By 2020’s standards, its platforming mechanics feel rudimentary, but as a returning fan, it’s an exhilarating blast from the past that I couldn’t get enough of.

Rehydrated gives the game a fresh coast of graphics for 2020 but otherwise keeps things mostly the same. It’s closest comparison in recent years would be Crash Bandicoot N. Sane Trilogy. The biggest things to have changed are the more straightforward menus and how Mr. Krabs also asks for more Shiny objects for his Golden Spatulas than he did in the original.

If a licensed game from 2003 doesn’t appeal to you at all, Rehydrated probably won’t do anything for you. If you’re like me and grew up with it, it’s nearly perfect in its recreation. The updated graphics are colorful, crisp, and faithful to both the original game and the show.

I was overcome by a giddy feeling whenever I entered a new area or met a new enemy, as it felt like I was playing these parts of Battle for Bikini Bottom for the first time all over again. Everything I praised the original for still stands, and I’m willing to personally overlook the dated aspects of the gameplay because it’s accurate to a game that means so much to me.

Not the perfect package

The original Battle for Bikini Bottom suffered from many gameplay exploits;I remember glitching out of bounds more than once. While these issues have been sorted out with Rehydrated, the recreation still has its own problems.

Even after the day one patch, Rehydrated occasionally has technical issues. The frame rate was fairly inconsistent. If too many explosions or shiny objects were on-screen, it would chug. A few cutscenes also de-synced with their audio, and other audio glitches would cause the same annoying sounds to repeat ad nauseam.

The game hard-crashed on me once, and some collision glitches sometimes made combat feel janky. These issues break an otherwise perfect nostalgic illusion, but can still be fixed via patches.

The one problem that sticks out like a sore thumb is the tacked-on multiplayer mode. Instead of adding cut content back into the actual game, developer Purple Lamp decided to repurpose it and make their own mark on the game with a multiplayer horde mode that can be played locally or online. Unfortunately, this mode winds up being just as mundane as it sounds and makes you question why the developers even added it.

While it features some playable characters that aren’t in the main game like Mr. Krabs, Gary, Squidward, and Robo Plankton, they all only have one attack. The movesets for SpongeBob, Sandy, and Patrick have also been stripped down. Even with these reduced controls, enemies never feel like a threat, and respawns are way too generous for a horde survival mode.

This mode also feels a bit undercooked with lackluster cutscenes, missing sound effects, and an abrupt ending that cements it as a time-waster. I was eager to finally have the chance to play Battle for Bikini Bottom cooperatively with my brother, who also grew up with the game, but now I don’t even want to expose anyone to that part of the package.

SpongeBob SquarePants: Battle for Bikini Bottom was an above-average platformer at best in 2003, so by modern standards it doesn’t age all that well. For anyone charmed by the original’s rough edges, you’ll enjoy this thorough and faithful reimagining of the cherished platformer — albeit one that may have benefitted from a bit more time in the oven to polish out technical problems and make the multiplayer mode bearable. 7/10.