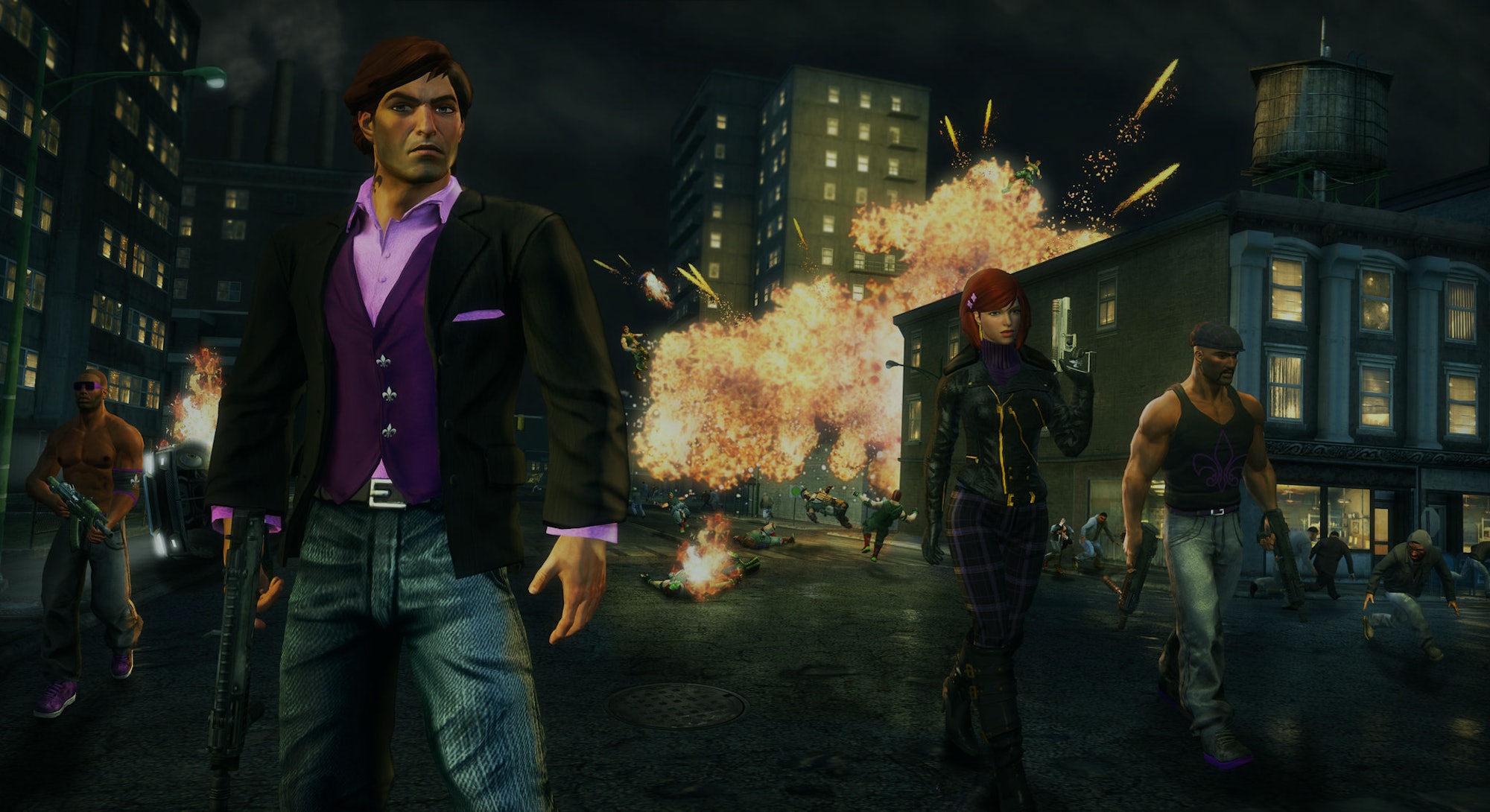 Saints Row has always lived in the shadow of Grand Theft Auto, but the series' best game is being rebuilt from the ground up, and it looks absolutely stunning.

Inverse got an early look at Saints Row: The Third Remastered in action last week. The remaster will introduce the bombastic and quirky open-world game to a whole new generation of gamers. All of the original gameplay elements are intact, but the best part of the remake is the improved visuals that look more on par with Watch Dogs 2 than Skyrim. It'll make you forget all about your longing for a Grand Theft Auto VI announcement.

While we wait for games like Saints Row V and Grand Theft Auto 6, the studios of Deep Silver, Volition, and Sperasoft have formally announced Monday that Saints Row: The Third Remastered will be released in May, confirming leaks from over the weekend about an early ESRB rating for the game.

The original Saints Row: The Third was initially released in 2011 as a bright spot in THQ's lineup. It's considered a high point for the series, essentially rebooting a campy Grand Theft Auto alternative into a franchise that could legitimately compete with Rockstar's iconic series of open-world crime games. Saints Row is known for its over-the-top humor, and a reboot of the best game in the series means that unless Rockstar drops some major announcement, Saints Row will have the best-looking title in the subgenre available later this year.

A Visual Overhaul — This is the same Saints Row: The Third you know and love, but this remaster drastically improves upon the original visuals. Even by 2011's standards, the original's graphics didn't impress. The faulty Switch port in 2019 only drew more attention to the plethora of technical issues that are present in the console version of the game. Thankfully, Sperasoft and Deep Silver are throwing all of those issues out with the remaster.

All of the guns, important NPCs, and building textures have been redone, totaling over 4,000 new visual assets, making this dangerously close to a "remake" rather than a "remaster." Seeing the new version in action makes it look like Saints Row: The Third was always built for PS4 and Xbox One.

"We really wanted to truly bring back that title to life," said Koch Media Art Director Nikolay Stoyanov during a digital presentation attended by Inverse. "Not just as simple remaster with 4K support, but with modernized graphics and to see how much we could actually enhance the art style of the product."

In addition to redoing all of those new textures, Deep Silver also stressed how the lighting enhancements, while boring on paper, really do make the game look a lot better. Saints Row: The Third Remastered will support physics-based rendering, global illumination, and HDR support. It's the complicated lighting technology that we take for granted in most modern games, but adding that tech into Saints Row: The Third makes the game pop.

During the presentation, Inverse saw a couple of minutes of gameplay where the player caused destruction around Steelport in a Genki mask. It's very much the same zany, destructive fun that we've all come to expect from the likes of Saints Row or Grand Theft Auto, and the visual enhancements make everything look so much "newer" even if it's still the same old game.

If you're getting a bit sick of Los Santos in Grand Theft Auto Online, you might want to spend some time being an agent of mayhem in Steelport once this remaster is released.

An underwhelming frame rate — While the visual upgrade is by far the most noticeable improvement in this remastered package, it does come with one major caveat: Deep Silver confirmed during the presentation Inverse attended that Saints Row: The Third Remastered will only run at 1080p and 30 FPS on PS4 and Xbox One. This isn't out of the ordinary for the genre, as both GTAV and Watch Dogs 2 run at 30 FPS on PS4, but it would have helped hit home the technological advancements made with this all-encompassing remake if it could run at higher levels.

Deep Silver informed Inverse that the PS4 Pro and Xbox One X versions of Saints Row: The Third Remastered "will be running at native 1440p (2560x1440) at 30 FPS" with "temporal upsampling to 4k output from 1440p." Such a resolution improvement doesn't improve performance at all. "For PC, the title will allow the user to set up the game according to their preferences by offering an uncapped framerate and presenting multiple customizable visual settings," the publisher confirmed, hinting that PC is the way to go with Saints Row: The Third Remastered.

Don't touch greatness — What made Saints Row: The Third so great was the insane wackiness of its world and story. From skydiving out of a crashing plane in a tank to hitting pedestrians in the face with a dildo-bat, Saints Row: The Third still serves as the epitome of Saints Row being the slightly off-kilter cousin to the already eccentric Grand Theft Auto series. Deep Silver is committed to making sure that's still the case.

Outside of the visual upgrades, the new development team seemingly hasn't done much to add anything new or noteworthy to the game. Saints Row: The Third Remastered is helmed by Sperasoft, a studio are known for assuming a support role on games like Tom Clancy's Rainbow Six Siege, Anthem, and The Elder Scrolls Blades. It previously collaborated with Saints Row: The Third developer Volition on 2017's Agents of Mayhem, and is now attempting to make more a name for itself with this remaster of one of Volition's best titles.

Looking towards PS5 and Xbox Series X — With next-gen consoles on the horizon, many gamers are starting to wonder what games will be launch titles for PS5 and Xbox Series X. As of now, Saints Row: The Third Remastered is not one of them. The PS4 and Xbox One version will be released months before next-gen consoles. The game will be released on May 22, so it will be one of the last major GTA-style games to be released before the end of the current console generation.

One way Deep Silver could futureproof Saints Row: The Third Remastered is with ray tracing, an advanced lighting technique commonly used in animated films that will finally be possible on PS5 and Xbox Series X.

"For the launch of the title, Ray Tracing will not be offered [on PC]," Deep Silver confirmed to Inverse. Deep Silver teased that ray tracing "needs to be investigated if it could be added after launch," so there's still a chance it might happen at some point in the future.

All signs are pointing to GTA 6 being a next-gen exclusive title, so Saints Row: The Third Remastered will give you gamers a similar kind of open-world crime sandbox to enjoy in the months (and perhaps years) before new games of this ilk are released for next-gen consoles.