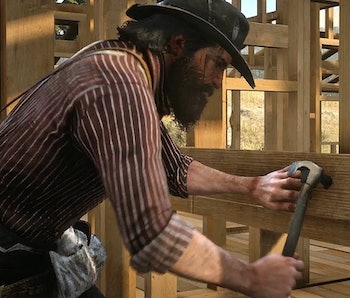 Mornin' stranger! Red Dead Redemption 2 has drawn widespread acclaim for its impeccable scenery, a marvelous array of beard stylings, and disturbingly accurate horse testicle mechanics. The immersive Western epic also includes an array of music from a remarkable range of artists, from D’Angelo to Willie Nelson. On February 5, Rockstar Games announced the release of the third album to feature music from the game — The Music of Red Dead Redemption 2: The Housebuilding EP. The crown jewel of the bunch is the very first track, "The Housebuilding Song."

If you made it all the way to the epilogue of Red Dead Redemption 2, you'll recall that John Marston buys the downtrodden ranch at Beecher's Hope in an attempt to persuade Abigail that he's reformed from his outlaw ways. After a bit of futzing around, John goes deeper in hock with the bank and decides to build a suitable family home, with the help of his old buddies Charles and Uncle. Word travels, Abigail returns to Beecher's Hope with Jack, and the family lives happily ever after. (Until the events of the first Red Dead Redemption, anyway.)

If you haven't experienced the glory of "The Housebuilding Song" and the scene that accompanies it, we've taken the liberty of embedding it below. Coming hours after the somber conclusion to the main story, it's an endearingly wholesome montage that makes you realize all the good that came of Arthur Morgan's devotion to John and his family.

You'd be hard-pressed to find a better chore-doin' song than this one. Got an Ikea shelf to assemble or some artwork to hang? Put on this toe-tapping tune and you'll be smiling all the way through. Keep your sea shanties, TikTok. We'll stick to the harmonica and mouth harp.

The Housebuilding EP features four more previously unreleased songs from Red Dead Redemption 2 by David Ferguson and Matt Sweeney. Ferguson grew up as the right-hand man for Johnny Cash and "Cowboy" Jack Clement, while Sweeney is a guitarist, composer, and producer whose work can be heard on albums by Johnny Cash, Adele, Run The Jewels, and Iggy Pop.

Here's the full tracklist for The Housebuilding EP:

The Music of Red Dead Redemption 2: The Housebuilding EP is out February 12.

More like this
Gear
Dec. 5, 2022
Google Stadia refunds are finally available. Here's how to get yours.
By Jackson Chen
Gaming
6 hours ago
Everything we know about the stunning post-apocalyptic game After Us
By Willa Rowe
Gaming
16 hours ago
One Marvel Snap Destroy deck is the secret to defeating any enemy
By Joseph Yaden
Related Tags
Share: