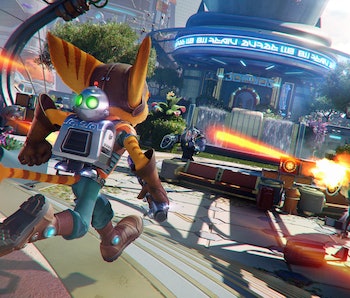 Oh, wow, the bigshots have arrived on PlayStation 5. After gracing the silver screen in 2016, Ratchet and Clank have returned for another game.

Ratchet & Clank: Rift Apart brings the duo back to the original timeline, pitting them against Dr. Nefarious, who has obtained the series’ long-running MacGuffin, the Dimensionator. It’s up to Sony’s longest-running mascots to bring Dr. Nefarious’ new plans to a halt, but there might be twice the trouble waiting for them.

Here's everything we know about Ratchet & Clank: Rift Apart.

When is the Ratchet & Clank: Rift Apart release date?

Is there a trailer for Ratchet & Clank: Rift Apart?

From the trailer, we can see that Ratchet and Clank have returned to Megapolis, a city featured throughout the franchise. They’ve arrived to be honored at an apparent festival focused on them. The fun is spoiled by the arrival of long-time series villain, Doctor Nefarious.

In the new world, Ratchet and Clank are separated. Clank travels with a new female character named Rivet, while Ratchet takes on the new world mostly by his lonesome. Clank does seem to rejoin him at some point, as there are shots with Clank on his back. It’s unknown when that occurs.

Ratchet and Clank have another bout with the Dimensionator, the MacGuffin that was previously featured in the Ratchet & Clank Future series on PS3. It seems that Dr. Nefarious has gotten his hands on it with evil intentions. It's up to everyone's favorite animal and robot team to stop them.

This change might also mean that we see old characters pop up in Rift Apart. In the State of Play for Rift Apart, there was an armor set for Captain Starshield, a character from Ratchet: Deadlocked. There’s a chance this is just a reference, but it could also herald the return of other characters from previous games.

What is the female Lombax's name in Ratchet & Clank: Rift Apart?

As revealed in the latest trailer for the game, Ratchet's feminine counterpart is named Rivet.

She lives on the planet Sargasso, which was previously featured in Ratchet & Clank: Tools of Destruction as home to a Lombax lab. It’s unknown if the lab will return in Rift Apart.

Will Ratchet & Clank: Rift Apart be available on PS4?

Ratchet & Clank: Rift Apart is a PS5-exclusive game and will not be available on other platforms.

Are there any Ratchet & Clank: Rift Apart pre-order bonuses?

Yes! If you hop to your local or digital game emporium before the release date, you'll get exclusive goodies. This includes Carbonox Armor, which is a complete remake of the armor first featured in Ratchet & Clank: Going Commando as the final obtainable set. You'll also get access to the Pixelizer, a weapon that transforms foes into pixelated versions of themselves. Pixelizer was first featured in the 2016 Ratchet & Clank game.

There's also a Digital Deluxe Edition available for $79.99. The upgrade includes five additional armor sets, 20 Raritanium for upgrading weapons, a sticker pack to use in photo mode, a digital artbook, and a digital soundtrack.

The Performance Mode or Higher Rendering Mode dichotomy has been available on most PS4 exclusives since the PS4 Pro launched. With next-gen on the way, it seems this will become a standard option in most games.

Nevertheless, Insomniac has assured gamers that it will work as a standalone game as well. If you jumped into the series after Ratchet & Clank 2016, this game should still make sense to you. It also works as your very first Ratchet & Clank title.

That being said, given all the dimensional traversing we might still see the rebooted timeline continued as well. It would be easy for the original Ratchet to team up with the reboot Ratchet, making every fandom member squeal.

This article was originally published on Aug. 31, 2020