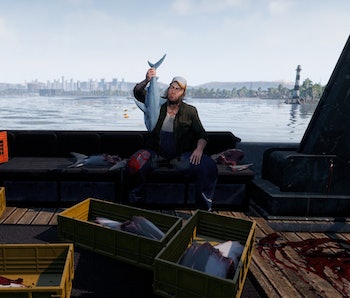 Grand Theft Auto’s influence on the video game industry can’t be overstated. The infamous crime franchise helped popularize sandbox games, paving the way for franchises like Just Cause and Watch Dogs. Some play it straight with standard crime stories, while others try to up the ante in absurd ways.

While there are plenty of GTA-inspired games out there, few are as ridiculous as Maneater. Sony is offering the game as a freebie for PS Plus subscribers who own a PlayStation 5 in January, and trust us when we say you can't miss it.

Here’s the short elevator pitch: Maneater is Grand Theft Auto, but you play as a shark.

If that somehow isn’t enough to make your ears perk up, let’s ... dive a little deeper.

Maneater is an underwater open-world game where players start as a small shark pup and slowly become a superpowered apex predator. The story itself is a sort of a reverse Jaws situation about a shark out to get revenge on the ruthless hunter that killed its mother.

On the surface, Maneater draws a lot of clear inspiration from Grand Theft Auto. The watery sandbox lets players attack other fish, ram into boats, or wash up on land to eat unsuspecting tourists. It’s also particularly hilarious, using a similar brand of satire to really make the world feel like a heightened version of our own. It's full of seaside weirdos and bumbling tourists.

There’s even a slight Tony Hawk’s Pro Skater comparison to be made here thanks to hidden collectibles that require players to have a strong understanding of their shark’s mobility options. There’s something satisfying and goofy about breaching 30 feet into the air and snagging a floating license plate as if it's one of Tony Hawk’s secret tapes.

The main difference is that the game is more of a full-fledged RPG (or a “shaRkPG,” as it's often called). Players gain experience for doing all sorts of shark tasks. When hitting certain level thresholds, the shark’s body evolves, making it stronger and more menacing. Players can even equip gear like fins or jaws that buff stats or grant specific abilities. There’s an entire bio-electricity set that can stun enemies, which is particularly badass.

Maneater is a clever game about natural evolution told through RPG design ideas like this. It draws a line between the way creatures morph in nature and how characters grow throughout a game. When players level up, their character is literally mutating into something stronger and more resilient to its surroundings.

There’s a cheeky parallel to be made about how the game itself reminds us of the way genres change and adapt over time as games build on one another. While Maneater is clearly in the same evolutionary line as Grand Theft Auto, it’s still wholly it’s own game on top of that foundation. It iterates on the franchise’s sandbox violence with a truly left-field concept. It’s the same genus, but a different species.

Maneater is now available as a free PlayStation 5 download for current PS Plus subscribers.