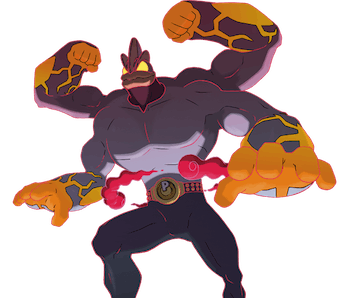 While they start strong, Pokémon generations often fall off in popularity shortly after the initial release when most fans have already completed the main story, leaving little reason to return. But Pokémon Sword and Shield are a bit different — especially when Nintendo adds a Gigantamax version of some Gen 1 favorites: Machamp and Gengar.

The addition of Max Raid Battles and Pokémon Dens have extended the game’s lifetime indefinitely. Players come back each month to capture a new Gigagantmax Pokémon, which are often troublesome to find in the base game. The regular events also add free item codes to the game and bolster encounters with select other Gigantamax ‘mons.

This month, let’s gather around a local Pokémon Den to capture Gigantamax Machamp and Gengar.

Are Machamp and Gengar good Pokémon?

Both Pokémon are fantastic attackers to include in your party. As a Fighting-type, Machamp is the cream of the crop. Machamp learns some great moves like Dynamic Punch at level 54 and Cross Chop at level 60. Gengar is an excellent Ghost/Poison type as well. Gengar learns the Ghost move Shadow Ball early at level 48, and from there they can learn a wide array of moves.

Either Pokémon would be a great addition to your competitive team.

Kicking off right as Gigantamax Toxtricity concludes, the Gigantamax Machamp and Gengar event begins on March 9 and concludes on March 25 at 8 p.m. Eastern.

Before you can begin your hunt for the two Pokémon in earnest, you have to add the event to your game. Open your main menu by clicking the X button then head to the Mystery Gift option. Once there, select “Get the Wild Area News.” Doing so will update your game to include Gigantamax Machamp and Gengar as a possible spawn within the Wild Area.

How to find Gigantamax Machamp and Gengar

If you’re having trouble finding one, try using the Pokémon Raid exploit to force one into existence or to farm one for your friends.

How to Battle Gigantamax Machamp and Gengar

When fighting Gigantamax Machamp, make sure to bring along either a Flying-, Psychic-, or Fairy-type Pokémon as they’re weak to all three types. At the very least, you should fight with a Pokémon that has attacks in at least one of those types.

For Gigantamax Gengar, take some Ground-, Ghost-, Psychic-, or Dark-type Pokémon with you. One thing to note with Ground-types: Nintendo is currently offering the TR94 High Horsepower for free. It’s a fairly destructive Ground move and all you need to do is head into your Mystery Gift menu and choose the “Serial Code” option. Enter the code PUNKR0CK to get 10 copies of the move. That code will be active until March 30, 2020.

Now, with your lance in hand, it’s up to you to fell the behemoth Pokémon.

Other events currently running in Pokemon Sword and Shield

You’ll be happy to know there are other events currently running in Pokémon Sword and Shield along with this one. Gigantamax Snorlax has also returned to the rotation in the Wild Area. Additionally, there are oodles of goodies like High Horsepower available for free rewards.

Here’s a list of the active ones and their rewards:

These can be entered through the same Mystery Gift serial code menu you used to obtain High Horsepower.

Be sure to capture the Pokémon before the event ends on March 25, 2020.

More like this
Gaming
Jan. 30, 2023
Everything We Know about the Fire Emblem Engage Expansion Pass
By Jess Reyes
Gaming
11 hours ago
Bayonetta Origins Has a Storytelling Gimmick More Games Should Steal
By Willa Rowe
Gaming
Jan. 31, 2023
The 8 Essential Fire Emblem Engage Characters You Need in Your Party
By Robin Bea
LEARN SOMETHING NEW EVERY DAY.
Related Tags
Share: