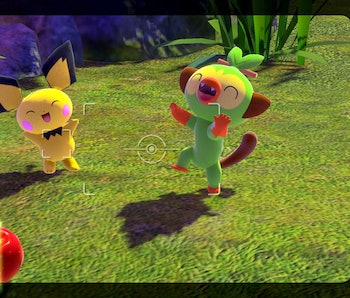 New Pokémon Snap will evolve you.

Sure, you might start the game as an amateur, but you’ll become a pro shutterbug in no time as you build out your portfolio. The best way to forge your portfolio with some high-level snaps is by completing LenTalk requests. These occur when researchers in New Pokémon Snap ask you to take pictures of specific Pokémon while they’re doing specific actions. Completing requests can earn you exclusive rewards, but they’re also a great way to get three-star and four-star photos.

Here’s how you can complete every request found in the Florio region in New Pokémon Snap.

Use the above map as a key to locate every Pokémon in the Florio Nature Park (Day).

Take a photo of Grookey as they perform a one-handed handstand. It’s very impressive.

Toss a Fluffruit into a field then take a candid as Scorbunny spends some time with Pichu and Grookey.

3. Request: Off to a Flying Startle

Give a Tailow a scare then take a picture as it tries to fly away.

Head to the lake and take a picture of a Ducklett in flight.

5. Request: Flopping by the Water

Even Pokémon abide by the survival of the fittest. Take a picture of a Pidgeot swooping down to pick up a Magikarp. Presumably, this Magikarp will be eaten for lunch.

You can do this by hitting the Pigeot with a Fluffruit, prompting it to land on a tree by Magikarp. Proceed to throw another Fluffruit at Magikarp, making it jump out of the water.

Pidgeot will now swoop in to eat the fish Pokémon.

Congrats, you’ve killed a Magikarp for a photo.

Reward: An Eye 7 sticker that can be used for photo editing.

Toss a handy Fluffruit into Bidoof’s dam. Take a picture as it rears its head from the dam in reaction to the Fluffruit.

Reward: A Nose sticker that can be used during photo editing.

Use the Melody to rile up a Bouffalant herd. They’ll begin to fight one another. Take a photo of their internal skirmish.

8. Request: Hide-and-Seek in the Flowers

A Pichu is hiding in some flowers. Toss an Illumina Orb at its location to make it pop out. Take a picture when it rears its noggin above the floral spread.

Toss an Illumina Orb at the first Crystalboom on the right side of Comfey’s habitat, encouraging them to approach the flower. Once Comfey arrives, throw it a Fluffruit to eat. Take a picture while it’s noshing on the Fluffruit.

Tailows will often fly over the lake in flocks. Take a photo of one to get its attention. Toss an Illumina Orb at a nearby Wurmple to bring it closer. The Tailow and Wurmple will now fight. Take a picture while this is happening.

While passing by fruit and an Emolga, throw a Fluffruit into the fruit patch. Emolga will zap the fruit. Take a photo while this is happening.

Reward: A Effect 4 sticker that can be used during photo editing.

12. Request: Livening Up the Flowers

Head over to Florges. Play a Melody, prompting it to emit a bright green aura. Take your photo as this happens.

Use the above map as a key to locate every Pokémon in the Florio Nature Park (Night).

Give a Tangrowth a scare then take a picture as it tries to run towards a nearby ledge.

Reward: A Design 5 Frame that can be used during photo editing.

Toss the Pigeot found by the Bouffalant two Fluffruits in succession to endear you to it. Once that’s done, leave then re-enter the flower field for a special greeting, and then take your photo.

Toss a Fluffruit to a Murkrow then take a photo while it’s chowing down on the fruit.

Use Melody on the Caterpie behind the sign where Hoothoot is often perched. Once that’s done you can snap a picture.

Toss a Illumina Orb at Dodrio, causing it to jump into the air. Take a photo as it goes airborne.

6. Request: Where It Snacks and Snoozes

Following completion of Where It Snacks and Snoozes, you’ll be able to spot Heracross and Pinsir hanging out in the open. If you watch them long enough, they’ll eventually start fighting. Take a picture of the skirmish to finish the request.

Hit a Swanna with a Fluffruit as they land in the lake to prompt the whole flock of the avian to take flight. Take a picture of the flock flying.

Wake a sleepy Torterra with a Fluffruit. It’ll yawn. Take a photo as that happens.

10. Request: Asleep on a Calm Night

Take a photo of Sylveon sleeping next to Torterra.

Throw a Fluffruit at a perched Hoothoot. It’ll lose balance, revealing its foot. Snap a pic of that foot.

Reward: A Design 13 Frame that can be used during photo editing.

Use an Illumina Orb to light a Crystabloom and the flower field, beckoning Vespiquen to appear. Snap a photo of her as she’s entering the area.

13. Request: Dancing with the Queen

After the last request, keep the Crystabloom lit. Combee will appear and begin to dance with Vespiquen. Take a photo of the two.

Use the above map as a key to locate every Pokémon in Florio Nature Park Illumina Spot.

This quest occurs around the end of the course. It requires Meganium to go behind the tree in the final area. Although making that happen is entirely up to chance, you can boost your luck in a few ways.

Completing both of these should’ve prompted Meganium to take a new route, heading towards the Hoothoot tree. Throw six Fluffruits at the tree to knock Hoothoot out. Meganium will sit next to Hoothoot and you’ll be golden. Take your photo.

More like this
Gaming
11 hours ago
How to pick the absolute best starter in Temtem
By Jess Reyes
Gaming
6 hours ago
How to unlock the BP50 in Call of Duty by using an ACOG optic
By Joseph Yaden
Gaming
5 hours ago
'Genshin Impact' Cyno materials: 6 character and talent ascension items to farm ASAP
By Jess Reyes
Related Tags
Share: