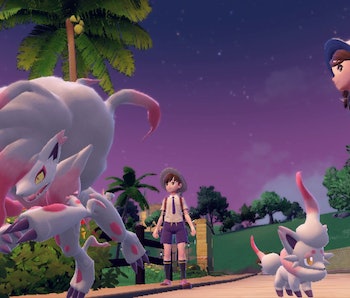 Pokémon Scarlet and Violet seems to offer more content than ever, but at what cost? Even Pokémon trainers have a budget — or, more importantly, a schedule. Some wonder if it’ll take a weekend or a couple of weeks to trudge through Paldea. After finishing the story, players might also want to hunt for the weird new Pokémon like Wiglett, Lechonk, and many other endearing creatures waiting in the open world.

Paldea certainly feels like a much bigger world, and it features three distinct but parallel story paths to follow. So does all that translate to a much longer runtime? Here's how long it takes to complete the three storylines, including the bosses for each and the total playtime.

How long does it take to beat Pokémon Scarlet and Violet?

Most reviewers took between 20 and 30 hours to finish Pokémon Scarlet and Violet. The website How Long to Beat also already received enough entries to start its page on the two games, which cites the main story playthrough at around 23 hours. That time varies depending on how long players take to explore the various areas. If you focus on wrapping up the three storylines and nothing else, then it should take closer to 20 hours.

It might seem short for a Pokémon game that has more “bosses” than average. However, it makes some sense when you consider how the map is structured and the difficulty of each boss. Random enemy trainer battles are also now optional, and you could theoretically avoid encounters with most wild Pokémon. In Scarlet and Violet, two sides of the map have similarly leveled gym leaders rather than each being much stronger than the last. Many points throughout the different storylines can also be completed one right after the other.

For context, 23 hours isn’t much shorter than the time recorded for Sword and Shield (26 hours). The older Pokémon games mostly take over 30 hours to complete, but they come from an era that emphasized the battle grind more than the present.

How many gym leaders are in Pokémon Scarlet and Violet?

Pokémon Scarlet and Violet has three storylines with separate “gym leaders” for each one. “Victory Road” is the series’ standard path, which involves battling the traditional eight gyms. Meanwhile, “Path of Legends” involves hunting down five Titan Pokémon. Then “Starfall Street” has you confront five bosses from Team Star, a renegade student organization that functions as this game’s Team Rocket equivalent.

Here’s the full list of gym leaders, Titan Pokémon, and Team Star leaders you can expect to battle if you want to complete all three storylines in Scarlet and Violet.

What do the Pokémon Scarlet and Violet reviews say?

Pokémon Scarlet and Pokémon Violet are currently sitting at about 77 on Metacritic. Most reviewers gave it a score between 6 and 8, and Inverse scored it smack in the middle at 7.

Many critics praised Game Freak’s attempt at open-world with how it deemphasizes the grind and gives players more options than ever before for how to complete their journey, even if the options aren’t as “open” as an open-world game would have you expect. The biggest flaw is the games’ poor performance, which includes half-loaded backgrounds and lag galore. Some clips have already started circulating on social media.

If you thought the performance of Pokémon Legends: Arceus was bad, then buckle up. Hopefully, future patches can make things a bit better.

Pokémon Scarlet and Violet are available for the Nintendo Switch.