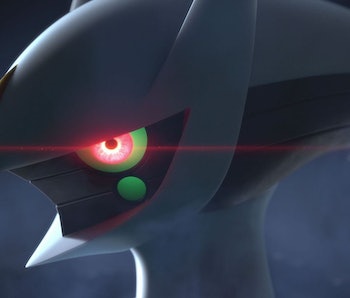 Finding legendaries in Pokémon Legends: Arceus is an exhilarating experience. Not only do they contribute to your Pokedex count — taking you one step closer to becoming a Pokémon Master — but best of all, you get an incredibly strong Pokémon that will help you conquer the toughest challenges in the Sinnoh region.

Almost all of the legendary Pokémon — there are two notable exceptions — only become available after you’ve beaten the main story. Here’s how to find and catch all 18 legendaries in Pokémon Legends: Arceus.

These two are the only legendaries who are available to you during the main story during the climax. You’re given a choice between two comrades: Adaman and Irida. Picking Adaman allows you to catch Dialga first, and picking Irida gets you Palkia first. Go to the temple of Sinnoh and your respective legendary will appear there.

Shortly after, the legendary you didn’t pick will arrive as the final boss of the game. Using the Origin Ball, you’ll then have the opportunity to catch it.

From here on out, every other legendary is only accessible after beating the game.

Accept Request 66: The Sea’s Legend and make sure to have three specific Pokémon in your party — Mantyke, Buizel, and Overquil. During the evening, head out to Cobalt Coastline and you can see two rocks coming out from the ocean like devil horns.

Head there and in between the rocks, you’ll be treated to a short dialogue about how there’s a boulder moving. Then head to Seaside Hollow and find it open. Inside you’ll find Manaphy and Phione.

Accept Mission 21: The Plate of the Lakes from Cogita and head to three respective homes of the Lake Guardian trio to find them.

Accept Mission 22: The Plate of Firespit Island and go to the island located near the Cobalt Coastlands to find Heatran. The Pokémon has a protective fire barrier around it and the Balls of Mud littered throughout the arena can be thrown at it to disable the shield. Then proceed to weaken Heatran as you would normally for any other Pokémon in order to increase your chances of catching it.

Accept Mission 23: The Plate of Moonview and head to Moonview Arena in the Coronet Highlands. Cresellia also has a shield around it and so it will need to be broken with stunning items (including any Mud Balls you have leftover from Heatran’s place). It also has a Confuse Ray type move that will invert your controls, so be careful and avoid it.

Accept Mission 24: The Plate of Snowpoint Temple and go to Snowpoint Temple located in the Alabaster Icelands. In order to open the door to Regigas, you’ll need the Icicle Plate, Stone Plate, and Iron Plate.

Before given the chance to catch Giratina, you’ll have to fight it first. After collecting all of the plates and speaking with Cogita, you can find Volo at the top of Mt. Coronet. Battle his team, and he’ll eventually summon Giratina.

After beating Volo’s Giratina, go back to Jubilife Village and speak to Professor Laventon to receive Request 91: On the trail of Giratina. Go to Turnback Cave in the Cobalt Highlands to find Giratina there, waiting for you to catch it.

For Shaymin, Request 92: A Token of Gratitude will only show up on Professor Laventon’s blackboard if you have save data from Pokémon Sword or Pokémon Shield on your Nintendo Switch.

Shaymin will then be located at the Floaro Gardens in Obsidian Fieldlands. You don’t actually have to fight it in order to catch it, but you can if you want.

For Darkrai, Request 93: The Darksome Nightmare will only show up on Professor Laventon’s blackboard if you have save data from Pokémon Brilliant Diamond or Pokémon Shining Pearl.

Go to Coronet Highlands during nighttime and head to the Clamberclaw Cliffs to activate a cutscene and find Darkrai.

All four of these are included in Request 94: Incarnate Forces of Hisui. After collecting all of the plates, you can speak to Cogita and pick any of the first three to go after in any order. However, Enamorus will always be the last one.

Tornadus is at the Bonechill Wastelands in the Alabaster Icelands. But it will only appear during a snowstorm, so keep resting at a camp until that occurs.

Thunderus is in the Cobalt Coastlands and will only appear during a thunderstorm. So keep resting at a camp until you see strong winds, rain, and grey skies appear. Similar to Manaphy’s location, head to the stones shaped like devil horns in the ocean. Swim out there to find Thunderus.

Landorus is located at Ramanas Island in the Obsidian Fieldlands. There are no weather conditions for his appearance so you can go ahead and find it.

After catching the three previous genies, as well as filling out their Pokedex entries, go back to Cogita. She’ll tell you about Enamorus, which is found at the Scarlet Bog in the Crimson Mirelands.

Finally, the big one. After completing the entire Pokedex, speak to Professor Laventon to unlock Mission 27: The Deified Pokémon. Head over to the Temple of Sinnoh at the top of Mt. Coronet where you previously fought Dialga and Palkia to find Arceus.

This fight is structured like a Noble boss battle. Deplete Arceus’s HP by throwing balms and fighting it with your own Pokémon, and Arceus will finally relent after four phases. It will then join you without any further fighting or needing to throw a Poke ball at it.

Pokémon Legends: Arceus is out now for Nintendo Switch.