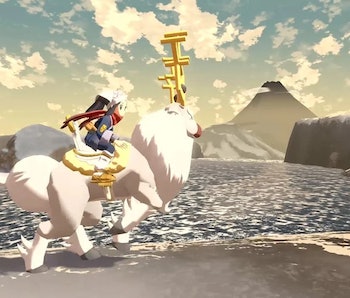 Games with multiple endings can be a bit confusing at times, and Pokémon Legends: Arceus is no exception. Though the main story is pretty simple to finish, if you want to get the game's true ending, you'll have to pour a lot more time into the Hisui region and catch every Pokémon. And that's not even mentioning the huge range of extra activities you can explore on the side.

The ancient region of Sinnoh is filled with Pokémon to research, requests to complete, and collectibles to find, so you won't be wanting for content. Even after the credits have rolled on the main story, you'll likely be strolling around Sinnoh for many more hours, capturing all the legendary Pokémon to unlock your encounter with the final boss.

That said, if you want to know what you're getting into before you buy, this guide explains the playtimes you can expect to finish the main story, all of the sidequests, or to get that 100 percent completion rate. We also explain how to unlock the true ending of Pokémon Legends: Arceus.

How long does it take to finish Pokémon Legends: Arceus?

Pokémon Legends: Arceus takes between 20 and 30 hours to complete if you're solely focusing on the main story. Not many of the bigger sites' reviews mentioned how long the game took them, but game length aggregate How Long to Beat lists the average playtime for the main story as 25 hours, based on 462 separate playthroughs.

But since Arceus is kind of an open-world game, there are lots of extra activities and quests to complete as well. To finish all of the sidequests you can expect to play around 40 hours, and if you also throw in the post-game content such as the true ending, this will bloat to between 60 and 70 hours.

Finally, if you're a completionist who wants to do everything, you're looking at 70 to 90 hours. This means you’ll catch one of every Pokémon including the mythical and legendaries, complete the true ending, all of the sidequests, reach max rank with the Survey Corps, research-level 10 for each Pokémon, and fully upgrade your satchel size.

How to get the Pokémon Legends: Arceus true ending

Many Pokémon games have extra content after you finish the main story, and Arceus is no different. Once you've captured either Palkia or Dialga, the credits for the game will roll, but to get Arceus' true ending there's a lot still to do. To unlock the Arceus boss fight, you'll have to get the Azure Flute and capture one of every Pokémon in the Hisui Pokédex, including the post-game legendaries:

When the time comes, you can use the flute to call Arceus on top of Mt. Coronet, sending you to another dimension where you can battle and capture the titular Pokémon for yourself. Though you'll still probably have some other side stuff to mop up, this is how you properly finish the game.