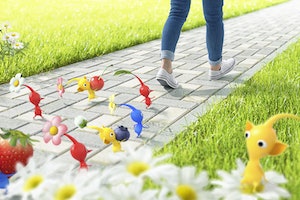 Mario, Zelda, and 2 more Nintendo series that deserve their own AR games

Even more Nintendo franchises will get the Pokémon GO treatment.

Pokémon GO and its unique augmented reality (AR) take on the long-running franchise took the world by storm in 2016. While it’s had to evolve quite a bit throughout the Covid-19 pandemic, the mobile game remains immensely popular. Nintendo has enough faith in developer Niantic to partner with the company on at least one more AR game.

On March 22, Nintendo and Niantic announced a new partnership and teased an AR game by the Niantic Japan Studio based on the Pikmin franchise.

“As we continue to expand our games portfolio, it was a natural next step to team up with Nintendo,” says Niantic CEO Josh Hanke in a press release. “We’re looking forward to shaping the future of AR together, bringing Nintendo’s beloved game characters to life for mobile game players around the world.”

Pikmin are obviously next, but these comments imply that there’s the possibility of even more Nintendo AR games in the future. But which would be the best fit? These 4 franchises would be the most fascinating picks for AR.

4. The Legend of Zelda

Nintendo probably shouldn’t ignore its biggest franchises when choosing what to adapt to AR. The Legend of Zelda is an obvious choice, though it may be a bit tougher to adapt as it’s a series that typically focuses on character-driven adventures.

Still, there are tons of novel concepts from throughout the series’ history that have lots of AR potential. From a simple follow-up to Link’s Crossbow Training for the Wii to a Korok Seed treasure hunt in the real world, Niantic and Nintendo could definitely find some original AR concept that’s a good fit for the Zelda series.

If Niantic wanted to make an AR game that you can play around your house instead of going out, Chibi-Robo! would be a prime candidate. This oft-forgotten but charming franchise follows the titular tiny robot as he helps clean up humans’ messes to earn Happy Points. The series lost its way in its later years, an AR game would be a great way to bring the series back to its roots.

You could help and watch Chibi-Robo clean up virtual messes around your household. You could even take him out with you and clean up your local neighborhood. This forgotten gem would adapt surprisingly well to AR and would encourage community service and environmentally friendly habits.

Walk your virtual dog while you’re actually walking your dog! This concept seems so astoundingly simple that it’s shocking Nintendo and Niantic haven’t already done it. Nintendogs was a staple of the DS era and allowed players to raise and train virtual pets.

Games of a similar ilk are already popular on mobile devices, and you wouldn’t have to change much of Nintendogs casual structure for phones. For those who don’t have pets (or want even more), training a virtual pet would be a great backdrop for the exploration and exercise that Niantic’s AR apps promote.

Finally, there’s almost no way this partnership goes by without a new Mario game. Universal’s Super Nintendo World already shows that Nintendo has no problem in making a Mario level feel like it works in the real world. A Mario AR game could be something like that, or just a more simple adaptation of an on rails shooter like Yoshi’s Safari.

Nintendo already adapted a more traditional Mario game for mobile with Super Mario Run, so it would be more exciting for Niantic to embrace some sort of weird and wacky concept for this game. Imagine being able to play it at Super Nintendo World too.

Overall, Nintendo’s future with AR is very thought-provoking a great fit for the innovative developer. When describing the new Pikmin AR game in a press release, legendary Nintendo developer Shigeru Miyamoto said that “based on the theme of making walking fun, our mission is to provide people a new experience that’s different from traditional games.”

Hopefully, Nintendo applies this concept to all of their AR games.

The Pikmin AR game will be released in 2021.