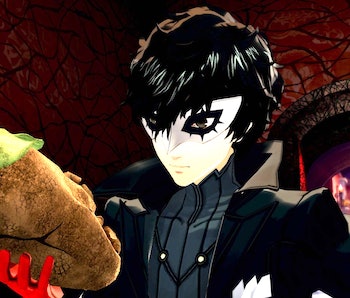 A lot of content was added between Persona 5 and Persona 5 Royal that justifies purchasing the $60 game a second time. One of the biggest additions are will seeds-- three collectible skulls that can now be found in every palace. If you manage to find all three, you’ll be rewarded with an accessory that can help immensely against that palace’s boss. You can start finding them as early as the first palace. Luckily, you don’t even need to find them, we’ve already located all three will seeds in Kamoshida’s palace for you!

Where to find Kamoshida's first Will Seed

The first Will Seed is a bit of a freebie. After defeating the mini-boss encountered at Kamoshida’s altar, you’ll be surrounded by enemy shadows, forcing you to flee with your handy grappling hook. The game will force you to head toward a ‘mysterious aura,’ and that’s your first Will Seed.

You'll need to use the grappling hook to get across a gap. Take note, the seed’s location is denoted by an ivy-covered door, this will be the case for all subsequent will seeds, so be on the lookout.

Where to find Kamoshida's econd Will Seed

It only gets more difficult from here. The second seed can be found as you’re scaling the stony exterior of Kamoshida’s tower. As you scale it, you’ll see a large window. Enter it. Once inside, you should see a vent entrance on your right. Head in, and on the other side you should see a chest. It's not the seed, but it's a nice little pick-me-up as you're halfway through this task. (Treat yo self! You deserve it!)

Look above your current location for a grappling hook prompt, then take it. Once you move up a platform, move a bit to the right and you will be prompted to use your grappling hook a second time, placing you on another small platform. There will be a window you can interact with on your new platform. Enter it, and the second will seed will be yours!

Where to find Kamoshida's third Will Seed

Kamoshida’s final Will Seed is the hardest to find. When you enter the Central Tower location in his palace, look for a tiny room on your map. If you’ve been there already it’ll be denoted by a large yellow circle. In the room you’ll find an elevator. Take it to reach a secret staircase on the palace’s lower levels. If you go down the staircase, you’ll find a second elevator that appears far more rickety, so attempt to take it.

Unfortunately, the controls won’t work. Remedy your situation by going through Kamoshida’s shirtless portrait, found in the area between the two elevators. You’ll be taken back to the palace’s first area, and a small unexplored room will appear on your map, highlighted as red. Within it, you’ll find the elevator controls. Activate them by pulling the ram-shaped chain.

Return to the rickety wooden elevator and head downstairs. You’ll reach a level covered in waterfalls, with cages hanging from the ceiling. There will also be a Will Seed door if you go left. The entryway is guarded by a fairly tough Slime shadow. You can make quick work of them by using Ann’s Dormina magic to put them to sleep, then knock them into submission with technical attacks.

With the slime defeated, the Will Seed is yours! Obtain the third seed to prompt all three to combine, creating the accessory Crystal of Lust. Anyone who equips the Crystal of Lust will be able to use the healing move, Diarama, which heals one ally by a medium amount. The user will also get access to the Champion's Cup skill, which restores a medium amount of HP and increases the target's attack for three turns.

The Crystal of Lust can be upgraded by speaking to José in Mementos to create the Ring of Lust. It has a few extra abilities like Tarukaja, which increases one ally’s attack for three turns. Even without the upgrade, it’s a great item!