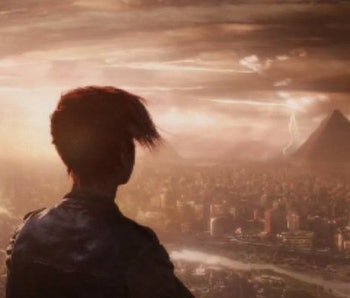 The secret's out. At The Game Awards on December 10, Microsoft finally revealed what the hush-hush project The Initiative has been working on since the mysterious Santa Monica studio was founded two years ago. In new reveal video, the developers showed off the reboot of the futuristic secret-agent adventure game Perfect Dark.

The original Perfect Dark was developed by Rare for Nintendo 64 back in 2000, intended to follow-up on the massive success of GoldenEye 007.

Here's everything we learned about Perfect Dark at The Game Awards.

When is the Perfect Dark release date?

The Initiative's Perfect Dark reboot does not yet have an official release date, which means we're likely a year or two away from stepping back into the shoes of Joanna Dark. In an official blog post on Xbox Wire, here's what the developers urged patience for those eager to hear about the game.

"We’re working hard to deliver on the promise of the next generation of game making," said "Darrell Gallagher, studio head at The Initiative. "We look forward to sharing more about Perfect Dark in the future.

Is there a trailer for Perfect Dark?

There sure is! It doesn't reveal a whole heck of a lot, but you can enjoy our first look at the expansive world of Perfect Dark below.

What platforms will Perfect Dark be playable on?

While The Intiative did not reveal a release window for Perfect Dark just yet, we can assume that as a first-party Xbox title, it will be part of the Game Pass library from day one, meaning it will likely be playable on PC, Xbox One, and the recently released Series S and Series X.

Since this is an Xbox first-party title, we wouldn't expect to see the game come to Switch or PS5 anytime soon. That said, stranger things have happened, but in any event it's likely to be an Xbox exclusive for some time.

Pretty much. If you've been tuned into the rumor mill, and expecting to hear that Xbox bought Nintendo, Sony, and Konami in the days ahead of The Game Awards, you likely came away a little disappointed by this reveal.

Ahead of the event, Xbox marketing lead Aaron Greenberg urged his Twitter followers not to get too swept up in the hype. "While we have a couple moments in the show, I would dial expectations way down versus speculation I am seeing," he wrote.

The Game Awards reveal comes after months of speculation that Microsoft was planning a major reveal for the December event, after revealing the Xbox Series X hardware at the 2019 show. Back in September, Microsoft's purchase of Bethesda parent company Zenimax prompted speculation the tech giant was on a spending spree, looking to acquire other major gaming studios before the year was out.

In June, Xbox head Phil Spencer told GamesIndustry.biz he was eager to improve the platform's standing in Japan, where it lags far behind both the Nintendo Switch and Sony's PlayStation 4. "I think it would be nice if we found an Asian studio, in particular a Japanese studio. I liked it when we had some first-party capability in Japan. We have a small team there, but I think we can do more,” Spencer explained.

Spencer's comments reignited a decades-old rumor that Microsoft could acquire Japanese developer Sega. The creators of Sonic the Hedgehog have been hit particularly hard by the Covid-19 pandemic, forced to sell off a majority share of its once-lucrative amusement arcade business in Japan in November. The company's 193 arcades in Japan will now be operated by majority shareholder Genda, but those locations that reopen will retain the original Sega branding.