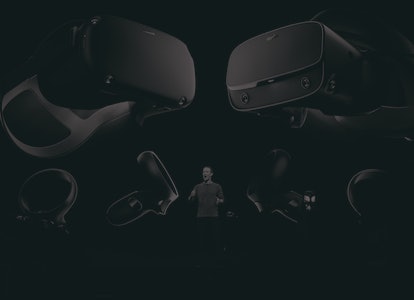 Anyone who purchases a new Oculus device after October 2020 will be required to log into the VR platform using Facebook, the social media giant announced on Tuesday. This consolidation won't be forced on veteran VR-gamers immediately, who can continue using their existing Oculus accounts until January 1, 2023. But after that deadline, the VR platform will end support for Oculus accounts and require users to log in through Facebook if they want access to the "full functionality" of their $399 headsets.

Unsurprisingly, Oculus fans are fuming at Facebook's latest overreach into the world of virtual reality.

Facebook bought Oculus in 2014, and the walls between the two companies have been eroding ever since. Users could log into the Facebook 360 VR app and use the platform if they wanted to, but now even switching on the app will require Oculus owners to use Facebook as a middleman. It's a bit like if your Samsung-made TV could only be turned on using a Samsung account.

VR fans are raging — In response, some promised to never buy an Oculus device, despite the company's successful push into more affordable headsets.

"I smelled this coming," wrote Redditor XL_Pharrow in a thread on the popular Games subreddit. "If you wanna be social with VR without sucking the Zucc you're going to have to shell more for Oculus' competitors. Not that VR was ever in my pay grade but I'm sad because the Quest was on my wishlist for quite some time."

Meanwhile, some people who already own a headset say they plan to sell them.

"Enormously disappointing, but hardly surprising," said Reddit user Peregrine2976. "I now regret my purchase of an Oculus Rift a couple years back. Will probably just sell it second-hand and get a different headset."

Mandatory Facebook integration for Oculus devices has long been something users feared after the tech company acquired the brand of VR headsets in 2014. With its new parent company, Oculus continued to promise its fanbase that logging into Facebook to hop on VR would never be required. That's a pledge that Oculus' founder Palmer Luckey even said he trusted at the time.

But Facebook tells Inverse that things have changed since the acquisition was brokered. Eliminating Oculus accounts in favor of Facebook accounts was the next step in Facebook's future plans for Oculus devices, as far as the social media company is concerned.

"Our business and products have changed a lot over the past six years," a Facebook representative said. "Using a Facebook account provides a single way to login to the Oculus platform and makes it easier to find, connect and play with friends in VR. It also enables Facebook-powered social experiences, like live streaming gameplay to Facebook, holding events and parties, and new experiences coming soon like Horizon. And it helps us offer more consistent privacy, integrity and safety protections."

Facebook's argument doesn't hold up — The company is justifying tightening its grip on the VR platform by offering native support to its video and social features as soon as someone straps on the headset. But all of these features were already available on the equipment, but customers could choose to only log into Facebook when they wanted to use these functionalities. That's no longer an option.

Facebook also claimed that widening the scope of its influence on its VR gear would bolster privacy and security, which is difficult to believe based on how fast and loose the company has played with user data in the past. Facebook already used VR consumer data to serve targeted ads, so Tuesday's news made it easier for the company to connect app and browsing habits directly to one's Facebook account.

These are changes that Luckey and long-time Oculus users have fundamentally disagreed with since the acquisition of Oculus. (In 2017, Luckey was forced out of Facebook after reports revealed that he'd donated $10,000 to a controversial pro-Trump ad campaign. He went on to fund a defense company that uses technology to help the U.S. government track illegal immigrants.)

The founder of the VR headset took to Reddit Tuesday to try and set the record straight after hordes of angry VR enthusiasts accused him of lying to them. Luckey stated that he still believes mandatory Facebook integration with Oculus is "lame," but he admitted that he shouldn't have promised fans of his VR headset that Facebook would never go back on its word.

"I consistently said this wouldn't happen, or at least that it was a guarantee I wasn't in a position to make," he wrote. "I want to make clear that those promises were approved by Facebook in that moment and on an ongoing basis, and I really believed it would continue to be the case for a variety of reasons."

Whether or not Oculus-owners were salty about this broken promise, many people on the Oculus subreddit made it clear they'll soon by buying a new headset. VR fans cited concerns with Facebook's spotty privacy track record, while others said they simply don't have a Facebook account to even log in with.

Either way, it appears Facebook has given Oculus's biggest fans every excuse to jump ship and buy competing VR headsets, like the HTC Vive or the Valve Index. That could put a serious hamper on the promising momentum Facebook gained from recent VR releases, like the wireless Oculus Quest that sold out during the 2019 holidays.

It remains to be seen if frustration over this Facebook-Oculus integration will cause a critical mass of users to ditch the platform or if the initial outrage will subside (major Facebook updates are usually controversial, but that controversy often fizzles out pretty quickly). That said, Oculus's platform is nowhere near as massive and crosscutting as Facebook itself, which could make it easier for people to leave the platform entirely.

While it is difficult for many people to completely ditch Facebook because of how ubiquitous the social network is, that isn't the case for Oculus. There are plenty of alternatives that just got a lot more tempting if you don't want anything to do with the ethically questionable social media giant.