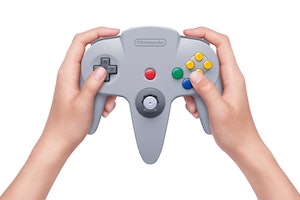 N64 games on Nintendo Switch: 7 ways to play without the NSO Expansion Pack

Nintendo Switch Online + Expansion Pack releases October 25, and, while many Nintendo faithful will reluctantly shell out the $49 annual fee to play a small catalog of Nintendo 64 and Genesis games, it’s worth noting there are quite a few ways to play titles from those platforms on Switch without the need for a subscription. If you’re looking for a retro fix you can own forever, here are seven products to consider.

Duke Nukem made waves with its unique style and off-color humor back in the ‘90s, and all of it is captured pretty perfectly in this remaster. The whole aesthetic of this game doesn’t age amazingly all the time, but it still serves as a nice reminder of the types of games the N64 catalog featured. It’s easy to think of the platform as a place for family-friendly titles, but every once and a while Nintendo would let a weirdly mature product slip through the cracks. This game embodies the gamer humor of the N64 era. Love it or hate it, it’s available without a subscription.

Just as Quake defined the FPS landscape on PC, the title was equally relevant to N64 owners thanks to the release of Quake 64. This Switch release is technically just a remaster of the first game, but 64 is included as a DLC mod in the larger package. Games like Doom 64 probably had a slightly stronger foothold in the console space, but its gory aesthetic won’t appeal to everyone. Quake is lightning-fast Id action at its best. If you have Game Pass, you can play this game for free.

If you’re in the mood for something grim, Doom 64 offers more than 30 levels of hellish action that marked the series’ transition to a whole new dimension. While not quite as iconic as the SNES Doom ports, Doom 64 is still a great showcase of the era in which it was made. If you happen to have Game Pass on your Xbox, you can also play this one for free. Thankfully, it’s also really cheap on Switch if you want to keep it on that platform.

Especially in the early days of the N64, Turok was a defining part of the library. With these remasters, you can play Acclaim’s awesome dino FPS with updated visuals suitable for the Nintendo Switch. These games may not age quite as well as you’d think, but they’re still plenty of fun to play. Decades since launch there really isn’t anything quite like this series, which makes us wonder precisely if, or when, a new entry in the Turok line might soon arrive. It’s no Goldeneye, but Turok still came to define what the third-party efforts on the 64 would look like.

While it came out fairly late in the N64 era, Star Wars Episode I Racer was one of the most memorable games on the platform. In many ways, it was similar to the F-Zero and Wipeout games already available on the system, but it came with the unique charm only true Star Wars branding can offer. At the height of the Phantom Menace fervor, Episode I Racer capitalized on the best part of the film to recreate some seriously fun high-speed thrills. If this price point is a bit too steep, it’s on sale pretty frequently as well.

This game isn’t available on the eShop anymore, but you can still buy it on eBay and other used game resellers for about $50 as a physical cartridge. It features Super Mario 64, which is arguably the most high-profile member of the Nintendo Switch Online N64 catalog. As a bonus for the extra cash, you’ll also get two awesome Mario titles in Super Mario Sunshine and Super Mario Galaxy as well. If retro Mario is all you really like, you don’t have to subscribe to NSO right now.

If you’re like me and don’t have that much nostalgia for the N64 in particular, this fairly cheap collection of 53 classic Genesis titles may be all that you need. When stacked up against the Nintendo Switch Online + Expansion Pack Genesis catalog, this cartridge is only missing the five third-party offerings on the list. That being said, it comes with dozens of more titles that will almost assuredly make their way to NSO in the months ahead. This collection isn’t perfect, but it offers a solid enough taste of the Genesis library to get you by.

Honorary mentions for other subscriptions:

Part of the reason why many Nintendo fans may be seeking alternatives to the Nintendo Switch Online + Expansion Pack is that competitive offers on other platforms may have a better catalog. Independent of Switch, Xbox Game Pass and PlayStation Plus give gamers access to newer releases and a robust multiplayer platform with voice chat, messaging, and other features the Switch doesn't have.

If no combination of the games on this list will satisfy your itch, it doesn’t hurt to see what Sony and Microsoft have to offer. This article simply exists to prove there are far more nuanced ways to spend your money than to automatically enroll in the Switch’s $50 yearly expansion.