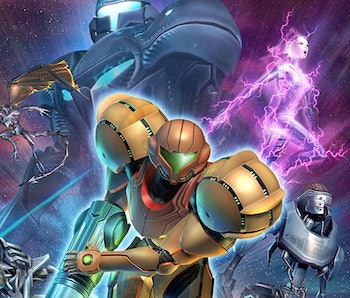 It’s been five years since the announcement of Metroid Prime 4, and fans have been understandably desperate for any crumb of information. While we did get Metroid Dread in that time, the only thing we’ve gotten in terms of Metroid Prime is rumor after rumor about remasters. Now with the latest Nintendo Direct, fans think they’ve spotted yet another hint at the existence of a Metroid Prime Remaster.

During its September Direct, Nintendo announced a host of new Nintendo 64 games coming to its Switch Online service. One of the bigger surprises was the announcement of GoldenEye 007, and during this announcement eagle-eyed fans on ResetEra noticed something interesting, the player icon displayed in the top-right is the Metroid Prime icon.

The icon is, of course, the player icon that anyone can set as their own, but it’s interesting that Nintendo would choose the Metroid Prime emblem when it could have been anything. By itself, the detail would seem like a mere coincidence but after all the rumors about a Metroid Prime Remaster, it’s hard to say it’s just that.

Days before the September direct, insider and Giant Bomb reporter Jeff Grubb claimed that a Nintendo Direct was on the way, and earlier in September, he claimed that a Metroid Prime Remaster would be part of the next Nintendo Direct. While that obviously didn’t happen, Grubb does have a history of at least some accurate information. There’s even a Reddit thread going over the things he’s predicted accurately. Back in June Grubb said the Metroid Prime Remaster would release in time for the series’ 20th anniversary, but this actually isn’t the first time we’ve heard of the game.

Rumors of a Metroid Prime Remaster first popped up back in September 2021 from Nintendo insider Emily Rogers, who then went on to claim in December 2021 that the remaster was practically finished. With all of this in mind, it seems strange that Nintendo wouldn’t choose another emblem to use in the GoldenEye reveal unless it is teasing something.

It certainly isn’t unreasonable to see a Metroid Prime Remaster happening, especially considering Nintendo loves to celebrate big anniversaries with collections and remasters. For the 35th anniversary of Mario, Nintendo released Super Mario 3D All-Stars, and the September Direct even announced a remaster of Kirby’s Return to Dreamland for the franchise’s 30th anniversary.

It seems like a matter of when, not if, but if Nintendo wants to hit that 20th-anniversary mark for Metroid Prime it’ll need to have something announced by November 2022.