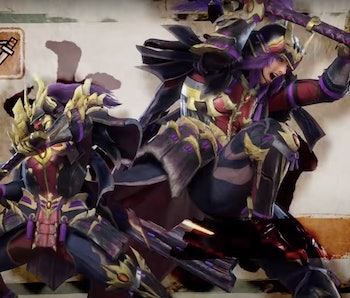 Monster Hunter Rise has finally landed on Nintendo Switch, and whether you’re a seasoned series veteran or a total newcomer, you’ll likely be wondering which of the game’s 14 weapon types to use. Whether you prefer to stick to a trusted favorite or mix things up, the Longsword is one of the most satisfying and exciting weapons to use in your struggle to defend Kamura Village from the Rampage.

The Longsword has a learning curve, and it takes a while to get used to its counterattack abilities. You’ll need to be focused in order to pull them off. This weapon is powerful, but it cannot block. It’s a middle ground between the rapid-fire Dual Blades and the slow but powerful Greatsword.

What sets this weapon apart amid your formidable arsenal is the Spirit Gauge, which is the sword icon right next to your weapon sharpness meter. In combat, you’ll want to fill up the Spirit Gauge as much as you can in order to perform powerful Spirit Blade attacks.

Below, we’re breaking down everything you need to know to become a master of the Longsword — basic controls and combos, how to use the Spirit Gauge, and the optimal weapon upgrades and armor pieces to make the most of the blade’s unique strengths.

Special Sheath: ZR + B (after doing any one attack)

To fill the Spirit Gauge itself, you can attack regularly, or you can take advantage of a mechanic called Autofill. Soaring Kick is a Silkbind skill that also activates Autofill, which as the name implies, will gradually fill up your Spirit Gauge automatically. Another way to trigger Autofill is to do an Iai Slash. After using any sort of attack, press ZR + B to enter Special Sheath. Then press X to do an Iai Slash. Your character will do a quick two-hit cross slash move that activates Autofill.

As your Spirit Gauge fills, you also have the opportunity to increase its level. There are three levels, indicated by its color. You’ll start off with no glow around the Spirit Gauge. A white glow means level one, yellow is level 2, and red is level 3. The higher the level, the higher the damage. In order to increase your Spirit Gauge to the next level, the most basic way is to repeatedly attack with the Spirit Blade technique.

When your Spirit Gauge is about 75 percent filled, press ZR to use Spirit Slash and a red aura should surround your character. Execute four Spirit Slashes in a row and the fourth slash should result in a Spirit Roundslash. You know you’ve done this correctly when you see white trails of light following your blade, and also that your Spirit Gauge has ascended to the next color. Try doing this repeatedly until your Spirit Gauge hits level 3, glowing red.

Each Spirit Blade attack will use up a portion of your Spirit Gauge, so make sure it’s filled enough so you can do four of them in a row. Keep in mind that both the fill and the level will slowly deplete over time if you don’t do anything with them.

Another way to build your Spirit Gauge is executing a Iai Spirit Slash, a countermove. This is similar to the Iai Slash that’s used to fill the Spirit Gauge (rather than increase its level). Like the Iai Slash, do a single attack just once, and then press ZR + B to do a Special Sheathe. Now, you can hold that position for as long as you want so wait until the monster attacks, then right before you think it will connect, press ZR to unleash an Iai Spirit Slash. This technique will boost your Spirit Gauge level even faster than doing the regular Spirit Roundslash.

Foresight Slash is a counter that can be executed in the middle of most attack combos. While you’re in the middle of attacking, if you sense that the enemy is about to hit you, you can press ZR + A right before you get it to dodge the attack with Foresight Slash. If successfully dodged, you can press ZR again to follow up with a Spirit Roundslash, thus increasing your Spirit Gauge level even more.

Spirit Helm Breaker is your ultimate attack, and can be executed while in the middle of Soaring Kick. Use Soaring Kick as usual by pressing ZL + X. When the first hit of the attack connects, immediately press ZR to launch yourself further into the air and come down crashing on the enemy with Spirit Helm Breaker. This move will consume one Spirit Gauge level.

The last technique is the Serene Pose. This one is mostly situational and should only be used as a last resort if you mess up the timing with your other counterattacks and you’re left vulnerable. By pressing ZL + A, your character will automatically sheathe their weapon and a bunch of bright lines will appear. If the enemy tries to hit you during that time frame, you’ll automatically counter and do a Spirit Roundslash. However, Serene Pose costs two Wirebugs so it’s very expensive.

For equipment, one of the biggest aspects you should focus on is Affinity. The higher the weapon’s Affinity, the more likely you’re able to inflict critical hits.

The Longsword variants in the Ore Tree line are very solid all around. The Iron Gospel is a great starting weapon — it's non elemental, has good stats, and is easily accessible early on. When you get to the mid-game, upgrade it to Keen Blade.

If you want the best of both worlds, the Nargacuga Tree Line’s Hidden Saber is non-elemental and has a 40 percent Affinity rating. However, that won’t be available until later in the game.

Drowning Shaft from the Royal Ludroth Tree is helpful against Magnamalo. Speaking of the game’s flagship monster, its Weapon Tree Line offers the Sinister Long Sword, which is “Blast” elemental. This means enemies inflicted with the blastblight ailment will suffer explosive damage after a time. It’s got good stats overall, too.

Mixing and matching will help you specialize your build. Each piece of armor comes with equipment skills, and the effects can be stacked. Since the Longsword can’t block, your best form of defense is countering and going on the offensive. That means you’ll want to maximize your attack power.

That means any armor with the Attack Boost and Critical Eye skills are great. The latter increases Affinity, which affects your critical hit rate. For starters, a full Low Rank Izuchi set will typically get the job done until you reach the Rank 4 hunts. It provides enough Critical Eye boosts to get you through the early game hunts.

If you want a build that focuses more on the Longsword’s counterattacks, then look into armor pieces that have the Critical Draw, Punishing Draw, and Quick Sheath skills, like the Barioth and Goss Harag sets. Critical Draw increases Affinity for a short time after performing a draw attack, such as the Iai Slash and Iai Spirit Slash techniques. Punishing Draw adds a stun effect to draw attacks and slightly increases attack power. Quick Sheath speeds up weapon sheathing time.

To unlock High Rank missions, you can either reach the six star Village quests and then complete the three Special License quests, or get to rank four in the Gathering Hub. You’ll also unlock the ability to craft “S” versions of existing sets. Each piece in a set tends to have more than one skill, and the skills attached to them typically are higher level. S sets also have higher base defense stats too.

The Barioth S set is fantastic for the Longsword as it has multiple Critical Eye and Quick Sheathe skills. It provides a good balance between a critical hit build and a sheathe-focused build. If you want raw power, the Anja S set and Rathalos S set are both great.

The difference is that the Rathalos S set has the skill Partbreaker, which makes it easier to sever parts from monsters. The Anja S set has the Slugger skill, which makes it easier to stun monsters. Both sets have huge Attack Boost skills, so it’s whatever your preference is. The Goss Horag S set is still the best when it comes to a specialized Sheathe build too, offering both Punishing Draw and Critical Draw skills.

The Longsword is a challenging weapon to learn, with a different approach that emphasizes timing. If you can learn to pull off the weapon’s counter techniques, you’ll be well on your way to becoming a master with the Longsword. You’ll also look very cool in front of your other Hunter friends.