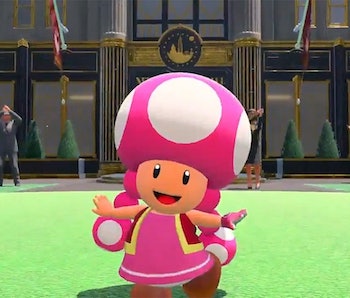 Fore! Nintendo just announced the first major update for Mario Golf: Super Rush, which is set to launch on August 5, 2021.

Better still, Nintendo has confirmed more updates will come later this year. Mario Golf: Super Rush was a good game at launch, but one of our complaints had to do with its lack of content, so these free updates should address that issue.

The same can be said about Animal Crossing: New Horizons, a game that felt lacking right from the start. Nintendo hasn’t done the best job supporting New Horizons post-launch, which is baffling considering it has sold over 33 million units.

With that in mind, Mario Golf: Super Rush already has a clear advantage over Animal Crossing: New Horizons.

Despite the bare package at launch, Super Rush has a bright future ahead if Nintendo plans to keep supporting it with updates as hefty as this one.

The inclusion of a new character is a notable addition that will hopefully spice things up in more ways than one. Toadette’s special move looks like it’ll be a force to be reckoned with and will encourage players to check her out.

Even more exciting is the New Donk City course, which — aside from just how fun it is — will encourage creative strategies that utilize the buildings, streetlights, and other parts of the city. Imagine bouncing your ball from a rail, off the side of a building, and straight into the hole!

For competitive players, the latest Super Rush update will feature a Ranked Match mode, which allows you to better track your stats online. As you improve, your World Rank increases and those who reach A- or higher are rewarded with different Yoshi color variants.

Finally, the update will also feature improved motion controls, which is a great sign since this was our preferred method of play.

Given how soon this update was implemented after launch, it’s likely we’ll get at least two more content drops of this caliber before the year’s end — and possibly more beyond that. This bodes well for the future of Super Rush, and by the end of its life cycle, it could very well end up being chock-full of things to do.

On the other hand, Animal Crossing: New Horizons has been disappointing in its post-launch content rollout. Given the series’ rich history, it’s ripe for callbacks to older games. It’s a missed opportunity that Nintendo has neglected to support New Horizons in any meaningful way thus far.

Most notably, the game is missing features and characters that were present in older entries. Specialty shops such as The Roost café, Leif’s Flower Shop, and more are notably absent — along with NPCs like Brewster, and others. Not to mention all the quality of life improvements the game so desperately needs (let us craft in bulk, please).

Despite how well New Horizons has done critically and commercially, it’s hard to overlook the way Nintendo has dropped the ball with its updates. Sure, we’ve gotten multiple content drops after launch, but none of them have been compelling enough to motivate us to jump back in — at least for more than an hour or so.

It’s not even a quantity-over-quality situation. The updates in New Horizons have been few and far between. No quantity or quality. Meanwhile, Mario Golf: Super Rush is already off to a great start with its DLC rollout. While it might not seem like much, the addition of a new course, character, and mode are substantial changes that build upon an already solid package.

We just wish Animal Crossing: New Horizons would get the same treatment. After all, it’s one of the best-selling games on the Nintendo Switch, but you wouldn’t know it based on its support after launch.