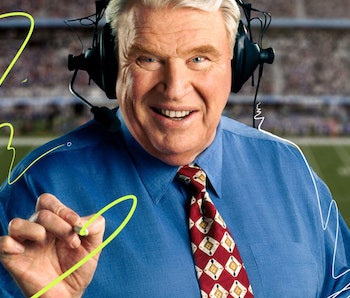 A new season of Madden NFL is almost here. It’s might be easy to assume that Madden NFL 23 is just the same game with a different number, but it’s different this year. It’s meant to be a total refresher for the series.

Heck, John Madden is on the cover of the game for the first time in 20 years. He’s even available as a coach in the game. Inverse previously wrote about how the hits, passing, and rushing have improved with the new Fieldsense features. Now, it’s time for the public to judge for themselves. Here’s what you need to know about the Madden NFL 23 launch.

When is the Madden NFL 23 release time?

We haven’t confirmed a way to pre-load on PC or PlayStation. As per RealSport101, you can pre-load on Xbox using the mobile app without even pre-ordering. Just make sure your console allows you to download from the mobile app and click “Download to Console” from the Xbox store to pre-load the game. It should be ready to play at midnight on launch day.

What is the Madden NFL 23 file size?

Madden NFL 23 has around a 50 GB file size across its platforms.

Steam recommends at least 50 GB of available space to download the game for PC. Meanwhile, Xbox estimates that Madden NFL 23 will need 46.16 GB for its consoles. It’s optimized for Xbox Series X|S but also available for its last-gen counterpart.

Madden NFL 23 is also available for PlayStation 4 and PlayStation 5. PlayStation doesn’t list its file size on its website, though. It will likely be around 50 GB based on the PC and Xbox sizes.

Does Madden NFL 23 have any pre-order bonuses?

Yes! All Madden NFL 23 pre-orders come with these bonuses:

You can also buy the more expensive All-Madden Edition for early access. Those who pre-ordered the Madden NFL 23 All-Madden Edition have been able to play since August 16. If you decide that you absolutely need Madden now, you can still pre-order before the release date and play today.

If you have Xbox Game Pass Ultimate or EA Play, you also get early access to Madden NFL 23 in the form of a free 10-hour trial. It’s not a launch title, but hey, at least you still get to play.

More like this
Gaming
Sep. 27, 2022
All 12 Yakuza games, ranked from worst to best
By Hayes Madsen
Gaming
Sep. 27, 2022
Grounded developers reveal secret inspirations behind its incredible art
By Robin Bea
Gaming
6 hours ago
How to pick the absolute best starter in Temtem
By Jess Reyes
Related Tags
Share: