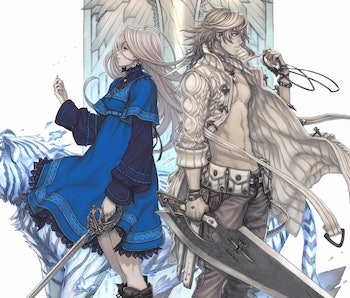 Hironobu Sakaguchi is well known by fans of RPGs. He’s the creator of Final Fantasy, on top of being a key member of development on titles like Chrono Trigger and Parasite Eve. Ten years ago, one of Sakaguchi’s most imaginative games released on the Nintendo Wii, and unfortunately it remains trapped in obscurity on that console. The Last Story is the last console game Sakaguchi developed, and it’s a wildly ambitious RPG that could seriously benefit from a remake.

The Last Story feels markedly different from the other games Mistwalker has released, telling a more contained politically-charged story that’s highlighted by an intense action combat system. You take on the role of Zael, a young man in a group of mercenaries who dreams of someday becoming a knight. Zael and the mercenaries take a job from the island kingdom of Lazulis, where he meets the young princess Calista, and his fate changes forever.

There’s a strong love story that The Last Story’s narrative revolves around, but the other members of Zael’s mercenary group also have their own roles to play. Dagran is like a brother to Zael and has help raise him since childhood, Yuric is a cold and calculating youth with a tragic past, and Syrenne puts forth a flirtatious personality to mask her trauma. These are all incredibly complex characters that have their own arcs to see, and everyone continues to play a role in the main narrative until the very end.

Like most Sakaguchi games, The Last Story is very character-driven and there’s a real sense of camaraderie between the group that develops immediately. The game is also similar to the original Xenoblade Chronicles, with a British English localization that helps give the story an extra dramatic flair.

While the narrative is easily The Last Story’s best aspect, the combat and gameplay is equally interesting, but where the game gets held back the most by the Wii’s hardware. You exclusively control Zael in combat, but do have some degree of control over the rest of the party in terms of issuing commands and using special attacks.

Combat plays out completely in real-time, and players have access to close-range sword attacks as well as a long-range crossbow. The game integrates some elements of shooters by using a kind of third-person cover system. On top of this, there are a ton of little strategy elements introduced with Zael’s unique skills.

Zael can use his unique power to do something called Gathering, which draws the attention of all enemies and lets the party execute attacks uninhibited. At the same time, many attacks lay down “field” that can be dispersed for a variety of effects, like imbuing the party’s weapons with fire or lowering the defense of nearby enemies.

Combat has some great ideas and it functionally works, most of the time, but the hardware limitations of the Wii really rear their head. Battles with lots of enemies and effects really make the game’s performance take a hit, and combat oftentimes feels imprecise, not to mention the camera issues. It’s not bad by any means, but it’s clear that the development had to work around limitations to create an “epic” action combat system.

The same can be said for the overall style and aesthetic of The Last Story. While the character and general world design are top-notch, it does often feel like the scope of environments simply doesn’t match what the story is going for. That’s especially apparent in the town of Lazulis, which is supposed to be a bustling castle town, but simply can’t fit too many NPCs on-screen.

There’s so much The Last Story gets right, but it’s easy to think about how much more it could have gotten right on better hardware. It feels like everything Sakaguchi does best, a dramatic character-driven story, strong worldbuilding, and a unique combat system.

If it really is the last console game Sakaguchi ever works on, it’d be great to see The Last Story really get the chance to deliver on what it set out to do. With JRPGs like Xenoblade Chronicles 3 proving more popular than ever on Nintendo Switch, it makes perfect sense to bring this overlooked gem back.