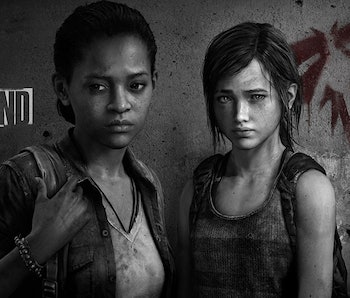 2013’s The Last of Us is an acclaimed game that has been purchased by over 17 million people. According to trophy tracking website, PSNProfiles, from those 17 million, only 58 percent of users completed the main game, and an even smaller user base of 5 percent completed the DLC, Left Behind. If you’re planning to play The Last of Us Part II, it might help to know what transpired in Left Behind.

The Left Behind DLC takes place during Ellie’s playable portion of Last of Us, when Joel is injured and you take control of her during the winter somewhat late in the game. Ellie scavenges for supplies in a dilapidated mall, and we experience a series of flashbacks that take place about three weeks before the present day of The Last of Us.

Here are four things you need to know from the DLC:

4. We see how Ellie learned about her immunity

In the DLC, we meet Ellie’s childhood companion, Riley. The two have a fun day at the mall, which is interrupted by a group of ravenous Clickers. Despite their best efforts, the Clickers inevitably scratch both Ellie and Riley. With their fate presumably sealed, Ellie and Riley decide to lock themselves in a room, succumbing to the madness together. But it never hits for Ellie. She uncovers that there’s something about her that makes her immune to the infection.

Ellie regrets that she didn’t perish with Riley when originally intended, and that survivor’s guilt is demonstrated in the Last of Us’ ending. It’s possible that her guilt will be retriggered by somebody else in her vicinity being infected during the sequel. Ellie will again curse the fact that she’s immune to the disease, unable to be killed while she watches those around her die.

3. Ellie attended school before Last of Us happened

When Left Behind opens, Ellie is in her boarding school bedroom, preparing for classes the following day. Prior to the events of Last of Us, Ellie was a normal girl attending school and worrying about bad fashion.

While the school itself might not be explicitly mentioned in the sequel, Ellie appears to want a normal life in Last of Us Part II but believes it isn’t something she’s allowed to have. This was evidenced in the dance scene from E3 2018 where Ellie repeats to Dina that she’s just a normal girl, nothing special.

Without her special biology, Ellie would have led a much simpler life even with the global outbreak. She'd have had a more sheltered upbringing within quarantine zones like other kids her age. Instead, a great responsibility was thrust upon her. Is she longing for a more normal life? Has she come to resent her "special" biology in the sequel?

After spending a day together at the mall in the series of flashback sequences, Ellie kisses Riley, and this is our first canonical exploration of Ellie’s sexuality.

Ellie has a romantic relationship with a new character named Dina in the sequel, so her representation as a gay hero will be an important part of The Last of Us Part II.

1. Left Behind almost established a key feature in the sequel

When games release, there are often features developers intended to include, but time didn’t lend itself properly to fleshing them out so they’re cut. That’s true for Last of Us as well. Naughty Dog intended to include a feature allowing the player to trigger fights between the infected and humans but lacked the time to code it in. Instead, the cut feature debuted in the DLC.

This remains a feature in The Last of Us Part II, and it was highlighted during a PlayStation State of Play showing you even more ways to get through enemies during the sequel.