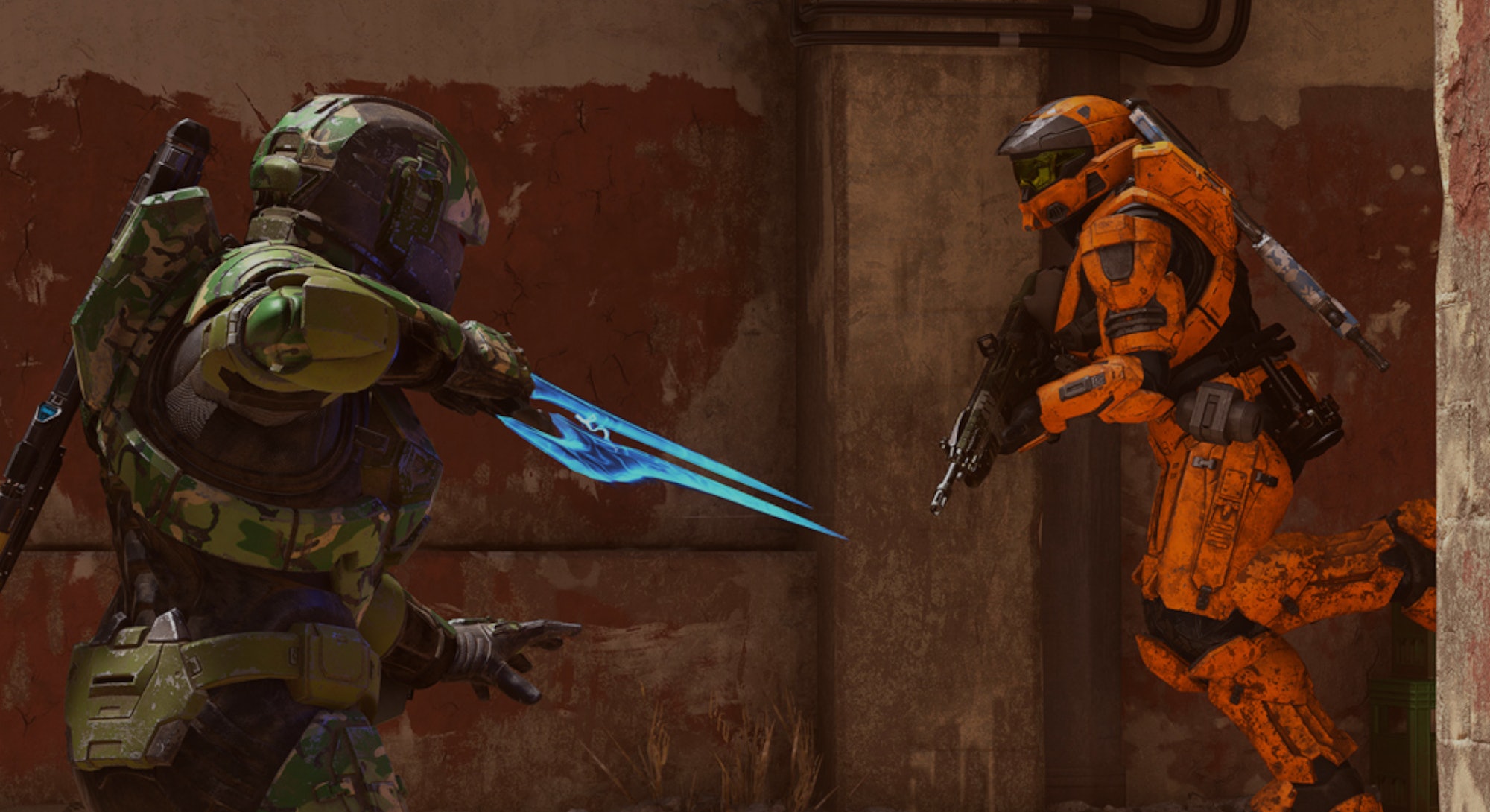 It’s been more than a year since the internet dunked on Craig the Brute.

After a widely publicized delay after a lackluster first showing, Microsoft’s 343 Industries let gamers get hands-on with Halo Infinite. This past weekend’s technical preview offered an abbreviated look at the long-awaited sequel’s multiplayer, as well as battle passes, challenges, and weapon drills to test out various guns.

Armed with a default pistol and assault rifle, your customizable Spartan — an elite supersoldier outfitted in MJOLNIR battle armor — teams up with three other players to take on a group of four bots. Weapons and items spawn sporadically at various locations around each map, offering an interesting strategic wrinkle. The “Bot Slayer” game mode offered a simple, but satisfying way for players to get their feet wet.

The preview delivered a barebones and streamlined foundation for what should eventually be a robust multiplayer experience full of gripping action and enough customization to satisfy anyone. It’s all fairly simple compared to some other games on the market, but that’s always been Halo’s strength: Doing the basics better than everyone else. Halo Infinite already feels like a return to form for a franchise that has lost a lot of relevance in recent years.

Inverse’s Corey Plante and Tomas Franzese went hands-on during the technical preview. Here’s what they had to say about the experience.

Corey: I’m immediately struck by how familiar but new Halo Infinite feels. I tried playing the Master Chief Collection’s multiplayer a few months back and didn’t really enjoy it — the whole thing feels a little too simple after I’ve played so much Destiny and Overwatch. Managing the items felt clunky. The lack of zoom on most weapons was irritating when it’s commonplace in shooters today. Infinite successfully strips everything back down to the clean-cut Halo basics while modernizing the overall feel and adding fresh mechanics like the varied item spawns.

The whole thing felt tremendously simple. But after only a few matches, I was hooked. You can see how this is laying down a really solid but thin foundation. What we’ve seen from the tip of the iceberg is excellent — but what’s submerged beneath the surface? It could make or break the game’s success. And I’ve got a hunch that it’ll be something great.

I’m a huge fan of Halo: Reach, which was really the first time the franchise leaned into customization with protagonist Noble Six. You picked the gender, armor style, colors, etc., so it felt like you stood just as tall as Master Chief. I’m loving how much Infinite leans into this approach. It’s pretty slim pickings so far, but clearly the developers are going to build out an item shop reminiscent of Warzone, where you can purchase everything from shoulder pads to prosthetic limbs for your Spartan. And the battle passes will be a huge part of that.

I seldom invest money in games like this, but I would pay extra for a really cool color scheme.

What are your initial thoughts? Do you think the team behind Call of Duty: Warzone should be worried?

Tomas: I haven’t played Halo in several years because I was scared off by the mixed reception to Halo 5: Guardians. That said, this preview demonstrated that Halo Infinite modernizes in all the right ways.

Halo is a fast-paced shooter where weapon pickups can be as important to a match’s outcome as your skill. Even this sparse preview retained the fun of smashing enemies with a gravity hammer or rushing in and taking out an enemy fighting one of your allies. It’s Halo in its purest form, and the fact that multiplayer is free-to-play means anyone will be able to try it.

That approach also explains why the game embraced modern battle pass and customization systems. So far, these features seem to be implemented well, and I was impressed by the number of customization items I could already unlock in this preview. 343 Industries understands what people like about the battle pass systems in Fortnite and Warzone, so I’m looking forward to seeing how they pan out in the full game.

Recent leaks suggest the multiplayer could eventually include a battle royale mode. Do you think that’s necessary for Halo Infinite to stand out as a modern multiplayer shooter?

Corey: Necessary? No. But could it work really well? Absolutely.

I grew up in the era of Halo LAN parties when we’d get four TVs and four Xboxes connected through a spare router, and this was before Halo 2 even came out in 2004. The point is: If ever there was a shooter franchise perfectly suited for battle royale, it’s Halo. The number of resources on each map and the time to kill with various weapons and vehicles means that more players is always better.

In most other shooters — particularly battle royales — if you come up against two enemy players you’ll almost always lose. But an adept Halo player can come out on top. In that sense, it could feasibly be more approachable than Warzone, which is tremendously difficult and frustrating.

Big Team Battle (BTB) in Halo 2 topped out at 8v8, and I have fond memories of getting a 30 killstreak piloting a Wraith while my team covered my flank from the ground. The rumors claim Halo Infinite’s cap could be 60. That prospect is titillating to say the least.

Halo Infinite doesn’t need a battle royale mode to compete, but 343 would be foolish not to capitalize on the trend when it would work so well. It would be sheer chaos and open warfare in a way that only Halo can do.

I loved the new grappler item, which feels virtually identical to the Pathfinder character in Apex Legends (in a good way). Spartans are fast and powerful, but they aren’t known for being nimble — it’s a huge potential game-changer for multiplayer.

Are there other features, mechanics, or items from other shooters out today you think Halo Infinite should emulate?

Tomas: The grappler is one of the most intriguing new additions to the game, and it feels ripped straight out of Titanfall 2 or Apex Legends. I’m excited to see how it’s used in the game’s campaign.

Other than that, I would love to see the game implement more ways for players to manipulate the environment. One of the best things about Fortnite is that you can build your own defenses. While Halo Infinite doesn’t need to go all out with a crafting system, it could still learn from that feature.

The maps in the preview were all expertly designed, and the teams I was on were already able to manipulate opponents to move in certain directions with our various items. The design is intuitive enough where you can start getting strategic straight away. Building fortifications in some areas or having more Apex Legends-style skills to play defense could add some intriguing depth to Halo Infinite.

That said, I don’t want to see the core formula change too much. Halo Infinite’s preview shows that the core multiplayer arena formula still holds up without any major gimmicks. It might not be the most visually outstanding game or most tactical shooter, but it’s lots of fun and showcases the peerless gameplay mechanics that have made this an iconic franchise.

I was worried about the state of Halo Infinite as it has had a tumultuous development. If the whole package is as polished and enjoyable as this, Halo Infinite might just become the Xbox Series X’s killer app.

Corey: You raise an interesting point about skills a la Apex Legends. I’d be intrigued by a Halo multiplayer where there were character archetypes with specific buffs, abilities, or even loadouts. In the Halo novels, Master Chief wasn’t the strongest or fastest. He didn’t even have the best shot. But he was a natural leader and the luckiest. That’s canon! Something a bit closer to a hero shooter would be a lot of fun with tanks, medics, and supports. Halo Infinite could hit a sweet spot right between Warzone loadouts and Apex Legends hero powers, but that is probably too farfetched a wish.

I was similarly worried about Halo given the saga of Craig and the long delays, but the technical preview was in great shape. I’d love to see them live up to the old “Combat Evolved” surname and take a few bold risks like Activision has done with things like Outbreak, or implement environmental interaction like you said.

Only time will tell! But everybody should be more excited than ever before about Halo Infinite.