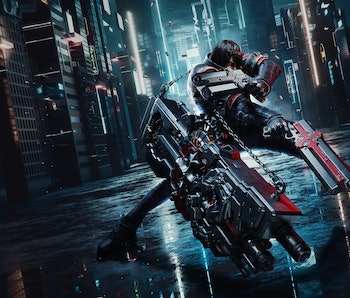 Every mission in Gungrave G.O.R.E. opens with a starting screen that says “Kick their ass!” on an emblem made of gold guns and skulls. It’s a cheeky way to set the tone for a game that is laser-focused on keeping the adrenaline pumping with a relentless stream of enemies that you decimate in a variety of bloody ways. I felt completely lost with what was happening with the story in the first four missions, but the arcade-style action was so much fun I hardly cared.

G.O.R.E. is the third Gungrave game, following up on the 2004 PS2 game Gungrave Overdose. The series is actually created by Yasuhiro Nightow, the creator behind the acclaimed anime series Trigun. While marketing says you don’t need to be familiar with past games, the hefty lore dump at the start begs to differ. You can theoretically just dive right in, but knowing the events and lore of past games will offer some vital context. Essentially, you play as Grave, a man brought back to life by a mad scientist and turned into an undead gun-slinging killing machine.

The opening minutes of G.O.R.E. makes for a baffling flurry of abstract concepts and bombastic cutscenes. Grave works with a military agency called El Arcangel to infiltrate a lawless city called Scumland. The second the shooting starts, however, any confusion the player may have had evaporates.

Grave has two main weapons in his arsenal: a pair of heavy revolvers and a massive coffin that he can swing as a melee weapon. While G.O.R.E. is technically a third-person shooter, the way the game plays out feels hugely reminiscent of an arcade shooter like Time Crisis. Grave automatically aims at enemies, and each time you hit the fire button he blasts out four shots. When enemies get in close, you can hit them with your coffin to cause damage and stun them (it’s also used to reflect rockets back at enemies, because why not?). You do have a dodge button, but Grave soaks up damage with a shield before you actually take HP damage.

That’s all just the tip of the iceberg, however, as G.O.R.E. has a ton of combat mechanics that it layers on top. Brutal executions can be used on stunned enemies, and a “Death Hook” lets you pull in enemies to use as a meat shield or grapple them for quick movement. You also have a host of skills called Demolition Shots that can be used as you charge up a gauge by causing damage, or you can use the same gauge to enter Fury Mode and increase your damage.

There’s a kind of musical rhythm that starts playing out in G.O.R.E.’s combat, as you switch from firing to blocking rockets, to using skills, and dodging. Although it’s hard to describe, the general feel of combat is visceral and crunchy. It is so satisfying to run into a room and absolutely mow down dozens in a flood of blood and bullets. The deceptively simple combat system is brilliantly complex the further you get into the game, especially as it starts throwing more enemy types at you, like hulking brutes that can soak up your bullets without flinching.

Ultimately all you’re doing in G.O.R.E. is running through linear missions, but the way the game embraces arcade-style combat and enemy encounters is what makes it all work so well. The presentation also plays a big part here, as fights are backed up by a rocking metal soundtrack that feels vaguely reminiscent of Devil May Cry. The game’s visual style is also incredibly flashy, with the Cyberpunk-esque city of Scumland lighting each battle with neon colors. A steady framerate also helps keep the high-octane action running at a steady clip.

With all that being said, there are a few small issues with G.O.R.E. that I hope can be ironed out before launch, particularly the camera. With so much happening on screen, the camera doesn’t always provide the best view of the action, and it’s unfortunately easy to get caught in a corner or have your view obscured by some crates or other items.

I also have some concerns about if the game’s formula can stay interesting over the course of the entire experience. The first two Gungrave games can easily be completed in just a few hours each, but G.O.R.E.’s marketing boasts over 12 hours of gameplay. There’s a robust upgrade system that unlocks new moves and abilities, but I’m not entirely sure the arcade combat can hold up for a dozen hours.

Still, developer Iggymob has leaned into the ultra-violent anime roots of Gungrave, and it’s working so far. I couldn’t begin to tell you what’s happening in Gungrave G.O.R.E.’s story, but I can tell you how utterly cool it was when I blew up a bunch of goons with a giant rocket that looks like a skull. At the end of the day, an unserious ultra-violent arcade experience feels like the perfect chaser for all the melodramatic stories we’ve seen in games this year.

Gungrave G.O.R.E. comes to PlayStation, Xbox, and PC on November 22.

More like this
Gaming
12 hours ago
High on Life is 2022's most intriguing shooter
By Steven Asarch
Gaming
November 21, 2022
Demonschool dev reveals how Suikoden and cheesy horror shaped the spooky RPG
By Robin Bea
Gaming
November 24, 2022
You have less than a week to get the phenomenal precursor to Hades at a huge discount on PC
By Willa Rowe
Related Tags
Share: